Year (NASDAQ: YEAR) - American company, which, using its devices, connects home TVs to the Internet. Its streaming platform is the largest in the three major North American markets.: in USA, Canada and Mexico.

In mid-February, Roku released financial results for 4 Quarter 2021, which American investors did not like very much: shares after the publication of the report fell by 23%. Basic moments:

IN 4 quarter of 2021, the American company recorded excellent sales: Roku's total revenue increased by 33%, up to $0.865 billion, thanks to the strong growth of the Platform division, which year by year added 49% and rose to $0.703 billion. Second segment, Player, showed moderately negative results amid weak demand: sales fell by 9% - up to 0.162 billion dollars.

Let's break down the three most important Roku operational metrics. The first is the number of active accounts, or the general audience of the company. The second is streaming hours - how many hours the audience spends on the Roku streaming platform. And the last indicator is ARPU.

In 2021, ARPU demonstrated the strongest growth rates — 43%, it grew by increasing the monetization of the service. The number of active accounts has increased 17% against the backdrop of a weak third quarter. The streaming hours increased by 15% because of the terrible results 2 quarter. 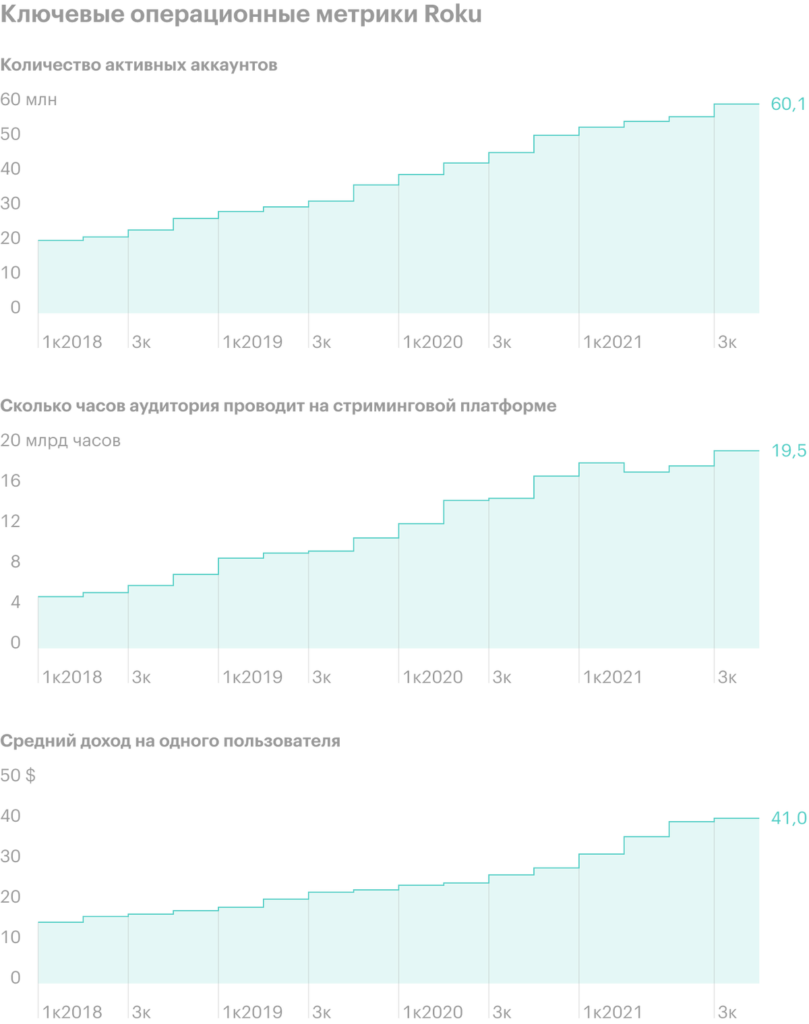 The main negative point in Roku's results for 4 quarter should be considered a strong increase in operating costs, which have increased by 49% and led to a decrease in Adjusted EBITDA by 24%: from $0.113 to $0.087 billion. The largest increase in expenses was recorded under the item “Sales and Marketing”, it immediately increased 70%.

Besides, rising operating costs also led to a drop in Roku's net profit, in 4 quarter, it decreased by 64%: from $0.067 to $0.024 billion. The adjusted indicator showed similar dynamics, falling by 65%.

Following the publication of financial results for 4 quarter 2021 management presented its forecast for the next quarter. Basic moments:

George Soros - The great speculator of his time

As a result, this slowdown in growth has resulted in, that the market took a fresh look at the company: Roku quotes fell from 490 $ up to practically 110 $, and the assessment was equal to another American competitor, Netflix. For example, companies have identical values ​​of the multiplier P / S — 5. But how fair is that?, Considering, that Roku's current growth rate is 33%, а Netflix — 16%?

​​ $SPCE Why Virgin Galactic Shares Fall Again? Will Virgin Galactic conduct space flight tests next month or not? Space tourism company Virgin Galactic plummets for second straight session on Thursday, closing on 3,8% Fall, and a fraction of a percent lower on wednesday.   George Soros - The great speculator of his time

Teladoc (NYSE: TDOC) - American site, on which clients are provided with services in the field of telemedicine. The company shows a good level of improvement, but the limitations of the format do not allow this sector to be considered truly promising.. And this is not good news for the owners of the company's shares..   DR Horton Review: how do american construction companies feel

We conclude our conversation with Maxim Zakharov - an algorithmic trading professional. FirstSecond Lifestyle of an exchange lonerStrategy of cubes It would be necessary to lay strawsLess timeframe - more secretsOil futures Lifestyle of an exchange loner - You are a member of the club of algorithmic traders? - Not, i'm a loner. But we have a certain company, which used to periodically meet at Smartlab conferences, while they were.   George Soros - The great speculator of his time

We end the conversation with Maxim Zakharov, an algorithmic trading specialist. 1-2nd Lifestyle of an exchange lonerTactics from cubes It would be necessary to lay strawsLess timeframe - more secretsOil futures Exchange loner Lifestyle - You are a member of the club of algorithmic traders? - Not, i'm a loner. However, we have a certain company, which previously gathered from time to time at Smartlab conferences, while they were.   Disney has published a financial report for the third quarter 2021 of the year