Lordstown Motors (NASDAQ: RIDE) - manufacturer of electric cars from the USA. Business founded in 2019 in the small town of Lordstown, Ohio, and listed on the NASDAQ in October 2020 through a merger with SPAC. 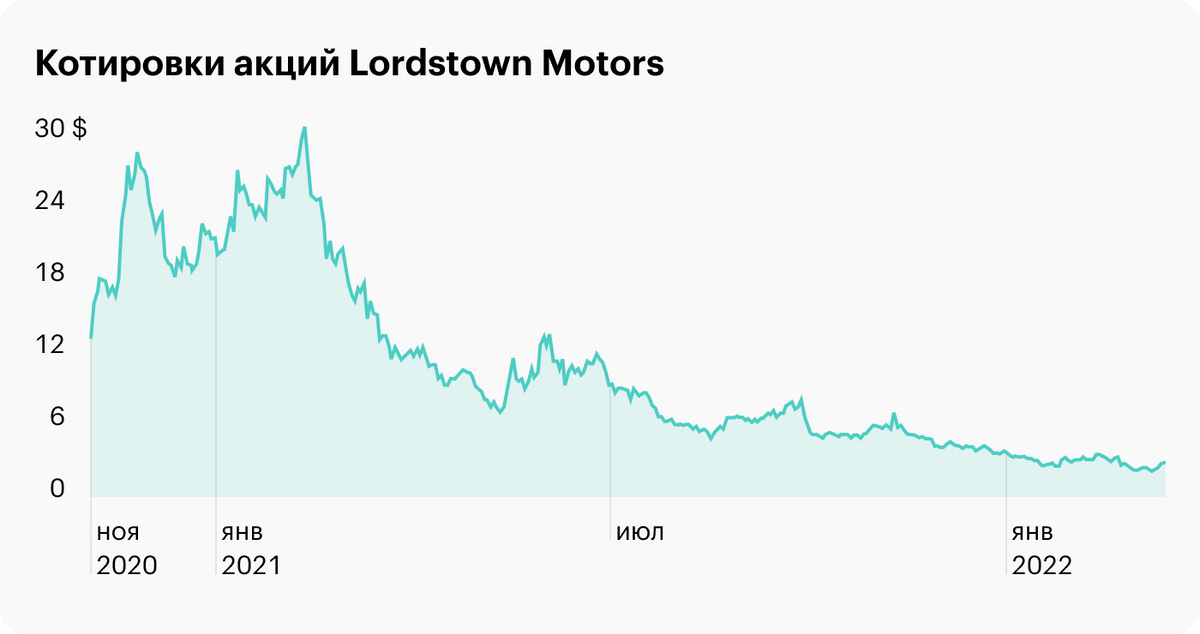 The company is developing its own all-wheel drive Endurance pickup truck with four independent electric motors in the wheel hubs., which should give the model an advantage in maneuverability and handling over traditional cars with internal combustion engines. According to the presentation, Lordstown electric pickup will have a payload capacity of approximately 544 kilograms, its serial production will start in 3 quarter 2022. 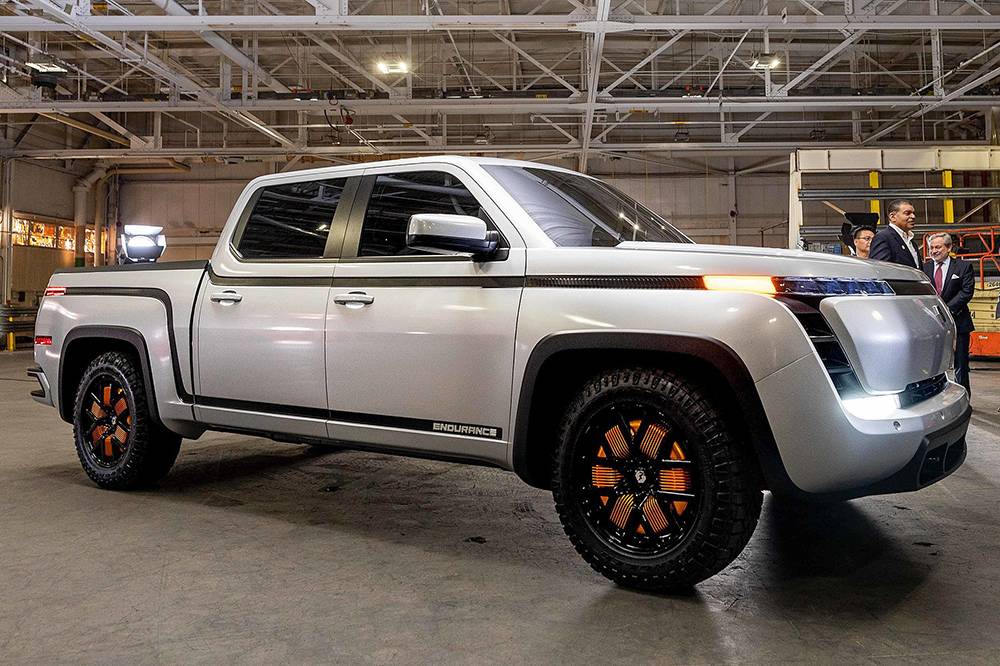 Nothing to offer. Despite the company's plans to sell the first 500 vehicles in 2022, she still doesn't have a finished product. Instead, there are global problems with supply chains and economic recovery in the conditions of the coronavirus., as well as direct competition with giants Ford and General Motors, who also promise to release similar models of electric cars this year, - and it seems, that both companies may well outpace Lordstown Motors in entering the market. 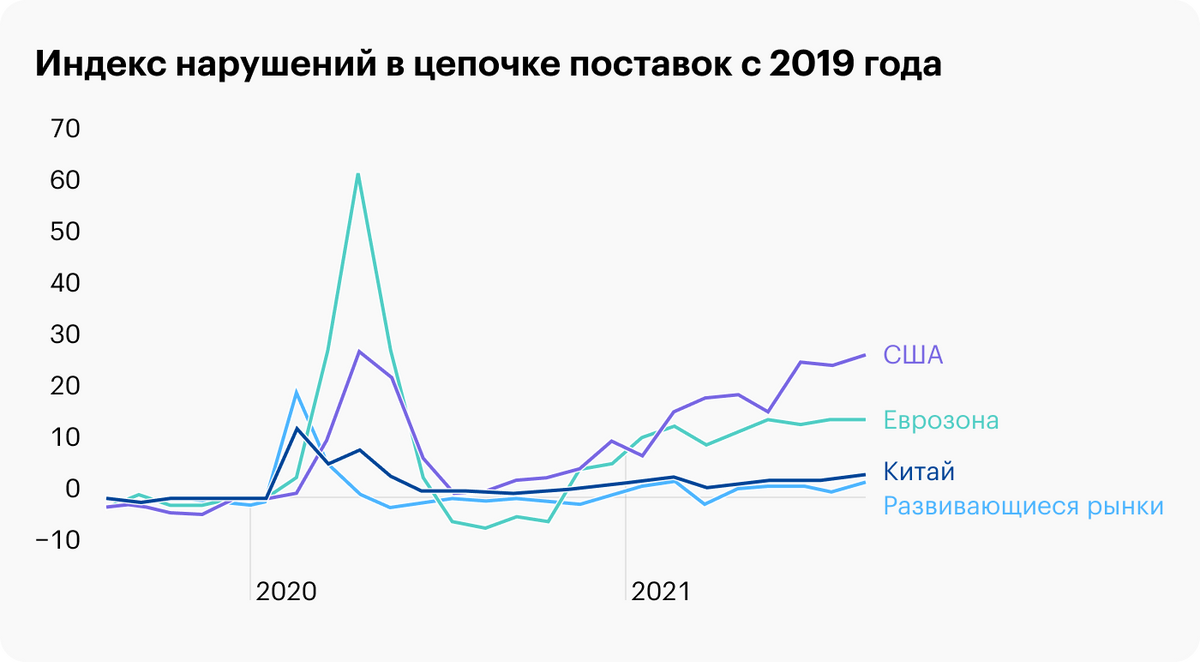 There is no smoke without fire. In March 2021 Hindenburg Research has accused Lordstown Motors of artificially inflating the demand for cars and the inability to produce them.. This was the basis for serious questions to the issuer from the US Securities and Exchange Commission, the investigation of which confirmed the overestimation of the number of pre-orders by the company to attract attention and publications in the press.

As a result, the business was on the verge of bankruptcy., CEO Steve Burns and CFO Julio Rodriguez resign after scandal, and to raise capital, the company had to sell an entire production complex for $ 230 million to Taiwanese Foxconn, who also invested $50 million in Lordstown shares.

Capitalization has gone from billions to millions. All of the above events had a corresponding effect on the market valuation of shares, and by the end of 2021, the capitalization of Lordstown Motors decreased from 3.3 billion to 550 million - in 6 once.

The current value looks extremely modest for a company from the automotive sector, and it brings more and more thoughts about, that in the end, Lordstown can simply be bought by larger and more successful market players. This development of events will not be a direct negative and for some investors it will be positive news., but at the same time, it will be possible to forget about the autonomy of the business and its developments. 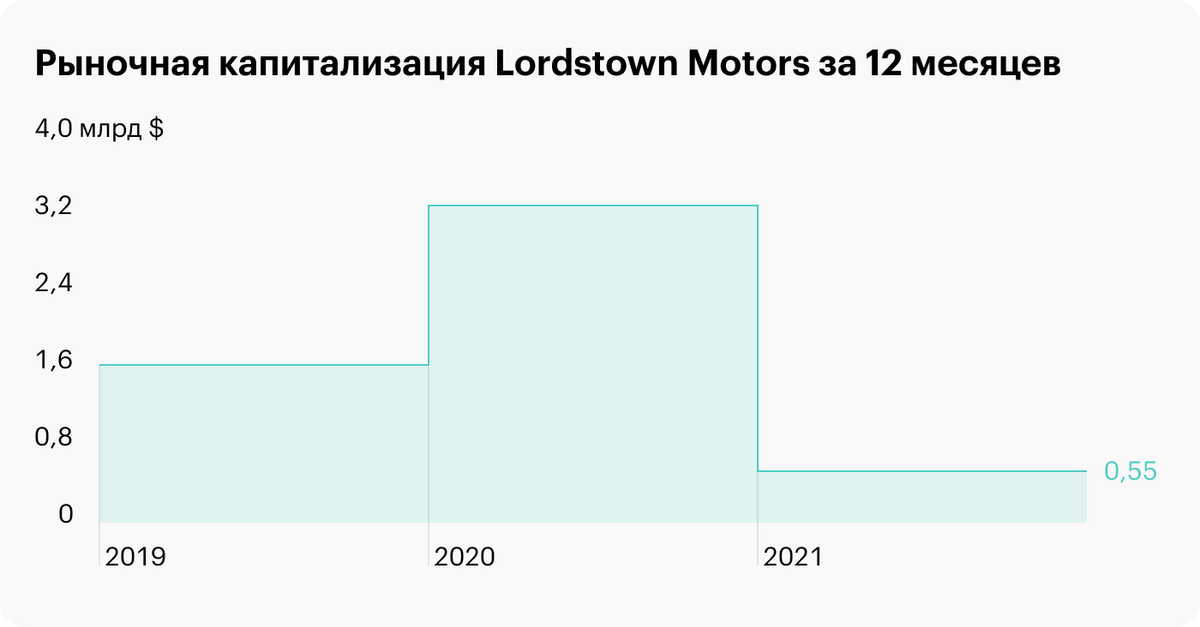 No debt. One of the apparently positive consequences of such a crude startup entering the NASDAQ was that, that Lordstown Motors is completely debt-free. From 2021, the company owes nothing to creditors and banks, which allows management to manage the business more freely even with shrinking capitalization and other difficulties with the development of an electric pickup.

Attractive book value. A major decline in stock price and market capitalization has an unexpected positive: Lordstown Motors fundamental valuation bounces back. The ratio of the market price of shares to their book value has decreased from a huge value of 191.82 to 1,02, and now, for every dollar of the company's tangible assets, when buying shares, investors give only 2 cent more. It turns out, that even in the worst possible scenario with the bankruptcy of the business, the losses on investments in it will be minimal.

The new CEO believes in the business. After the scandal with the Hindenburg Research investigation and the disappointing results of the SEC audit in August 2021, a new CEO, Daniel Ninivaggi, replaced the previous management of the company.. According to the data Finviz, the manager believes in the success of the business: since the beginning of March 2022, he has bought 20 thousand shares.

Lordstown Motors remains hopeful of beneficiaries of the electric car boom, to whom, seems, everyone in the US is happy: from journalists to the highest level government officials.

Market in demand, but there are more and more suspicions, what offers on it if not more, than demand, that's definitely enough for everyone. Competition and its aggressiveness are also appropriate: time, when everyone was talking about Tesla, obviously, passed, and now Ford has its own models of electric cars, Volkswagen and other industry giants. Under such conditions, a tiny business by industry standards with a single car model, which still exists only in the project, seems not the most suitable for investment.

Teladoc (NYSE: TDOC) - American site, on which clients are provided with services in the field of telemedicine. The company shows a good level of improvement, but the limitations of the format do not allow this sector to be considered truly promising.. And this is not good news for the owners of the company's shares..   Sylvamo Review: excellent paper in green packaging, but big debts