Gazprom Neft (MCX: SIBN) — a large vertically integrated holding, carrying out reconnaissance, development and production of oil and gas in Russia, Iraq and Serbia. Company on 95,68% owned by Gazprom, that is, in free circulation is less than 5% issuer's shares.

17 February 2022, the company published operating and financial results for 2021, which was truly a breakthrough.. Key indicators updated all-time highs: annual hydrocarbon production exceeded 100 million tons of oil equivalent for the first time, and net income more than quadrupled compared to 2020 levels, to a record 503.45 billion rubles, amid high hydrocarbon prices.

Consider the general situation in the hydrocarbon market, evaluate the dynamics of the main operating and financial indicators of the company, and also try to calculate, what can be the final dividend payments to shareholders.

Disclaimer: if we write, that something has risen or fallen by X% or X times, then by default we mean a comparison with the report data for the same period last year, unless otherwise stated.

For the sale of oil, gas and oil products accounts for more than 96% of all Gazprom Neft's revenue, therefore, the company is very dependent on the general situation in the global hydrocarbon market.

Demand and prices quickly recovered in the oil and gas market in 2021 after the severe crisis of 2020, when the pandemic and restrictive measures led to a collapse in oil prices and forced the largest oil producers to impose restrictions on oil production under the OPEC + agreement.

Despite recovery in demand and prices, starting from the second half of 2020, production restrictions are still in place, although gradually weakening. Since August last year, oil production has been increasing monthly by 400,000 barrels per day against the backdrop of favorable market conditions. In March, production limits will again be increased by another 400,000.

Recovery of the oil industry against the backdrop of the energy crisis, the easing of production restrictions and steadily growing demand allowed Gazprom Neft to increase production volumes and make good money on this thanks to a favorable price environment. 17 February 2022 Brent oil prices for a specific date rose higher for the first time since September 2014 100 $ per barrel. 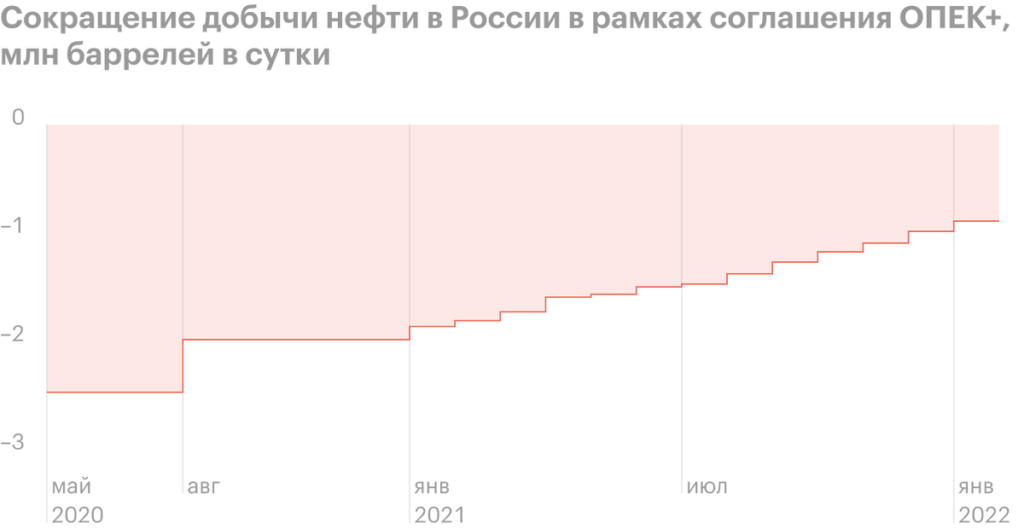 Hydrocarbons. At the end of 2021, taking into account the share in joint ventures, the level of hydrocarbon production increased by 6% and reached a record 749.27 million boe. The company increased production at its own and joint fields in the KhMAO and YNAO regions, as well as in the Tomsk and Orenburg regions.

Bundle of investment news: Trafigura, Rosneft and the European Adventures of Prologis

In June 2021, Gazprom Neft, together with Lukoil, launched the Tazovskoye field. The geological reserves of the field are estimated at 419 million tons of oil and 225 billion cubic meters of gas.

Oil and gas condensate. The level of production increased by 2,4%, up to 459.79 million barrels, however, so far the volumes have not returned to the levels of pre-crisis years.

Processing. Raw material processing volumes increased by 8%, up to 43.53 million tons, which was also a record result for the business. Moscow Refinery showed the largest increase in refining, adding 21% year-on-year against the backdrop of the launch of the new Euro+ production complex in mid-2020.

Gazprom Neft’s revenue in 2021 grew by 53% and reached a record 3.07 trillion rubles, of which 2.97 trillion rubles fell on the sale of oil, gas and oil products. Strong momentum reflects low base in 2020, when average hydrocarbon prices were at local lows. For comparison: the weighted average price per tonne of oil equivalent for the company increased in 2021 by 93%, from 5.05 thousand to 9.72 thousand rubles.

I will note, what, despite record production, the share of gas sales in 2021 was only 1,7% of total revenue. The fact, that external sales account for only about a third of the holding's total gas production, and the rest goes to domestic consumption. Besides, almost all gas produced is sold in Russia, where prices are regulated by the tariff policy of the state and therefore did not show that growth, observed in foreign markets.

OmniseGo digital currency. What is the coin and why?

Structure of sales revenue in 2021

Operating expenses of Gazprom Neft increased by 35%, up to 2.5 trillion rubles, which is mainly due to the increase in the cost of acquiring oil, gas and oil products for 77%, up to 883.7 billion rubles, against the backdrop of rising purchase prices.

The fact, that the company purchases significant volumes of hydrocarbons from joint ventures and associates for processing and subsequent sale. Besides, business more than doubled tax payments on mining, up to 687.8 billion rubles, due to an increase in the MET tax rate in Russia. And against the backdrop of inflation and an increase in production indicators, commercial, general business, administrative, transport and production costs.

As a result of the excess of sales revenues over operating expenses, Gazprom Neft’s operating profit almost quadrupled from the low base of 2020 and reached a record RUB 561.34 billion. Share of income of associates and joint ventures more than doubled, up to 102.4 billion rubles.

On the back of rising revenues, the company recorded a five-fold increase in current and deferred income taxes, up to 113.6 billion rubles.

Gazprom Neft's net profit grew by 4,3 Times, up to 503.45 billion rubles, and for the first time in its history exceeded half a trillion rubles.

Free cash flow on the back of improving market conditions and financial performance also reached a record level for the business — 500.09 billion rubles.

At the end of 2021, the amount of capital investments of Gazprom Neft increased by 7% and reached 441.83 billion rubles - another record. The main growth was provided by the exploration and production segment against the backdrop of the easing of OPEC + restrictions. In the fourth quarter of 2021 alone, capital investment in exploration and production increased by 72%, up to 104.7 billion rubles, which creates a serious reserve for increasing production in the future.

Despite the record amount of capital investments, holding's net debt 12 months has been reduced to 3,4 Times, up to 160.6 billion rubles, thanks to the growth of cash and cash equivalents for the year in 2,4 Times, up to 573.42 billion rubles. Besides, more than doubling annual EBITDA, up to 891.8 billion rubles, the level of debt burden by the ratio "net debt / EBITDA collapsed from 1,32 to 0,18. Today the company has one of the lowest leverage levels and a high level of financial stability.

Dynamics of the debt burden at the end of the period, billion rubles

In December 2020, the management of Gazprom Neft fixed in its dividend policy a target level of payments in the amount of at least 50% from IFRS net profit.

However, when calculating the payout basis, management uses a large number of net income adjustments., such as the effect of currency fluctuations, effect of asset revaluation, non-monetary revaluation from financial investments and participation in joint ventures, required funds for the implementation of the investment program, as well as other adjustments as decided by the board of directors. All these factors make it difficult to correctly calculate future dividends and force investors to rely on the goodwill of management when calculating.

Without adjustments, annual dividends could be around 53,1 P per share, however, the company has already paid 40 R per share for the first nine months of 2021, which means, the final dividend could be 13,1 P per share.

Gazprom Neft quickly recovered from the consequences of the 2020 crisis. The improvement in external market conditions and the rise in hydrocarbon prices not only made it possible to reach sub-standard levels, but also to update historical highs for most operating and financial indicators.

Besides, a sharp increase in investment in exploration and development of deposits in the fourth quarter of 2021 indicates that, that management expects favorable conditions to continue to increase production. So far, reality confirms these assumptions.: OPEC+ continues to ease restrictions on oil production, and liquid fuel prices are in the region of local maxima.

Growth in income from the sale of hydrocarbons allowed the company to multiply its net profit, free cash flow and reduce leverage to a multi-year low — on the back of record investment volumes.

Teladoc (NYSE: TDOC) - American site, on which clients are provided with services in the field of telemedicine. The company shows a good level of improvement, but the limitations of the format do not allow this sector to be considered truly promising.. And this is not good news for the owners of the company's shares..   Investidea: Pegasystems, because everything is now digital

постепенно пора привыкать к вот таким вот чудесным сырьевым графикам.а что будет, if oil does -40%?the beauty is, what +40%, it's almost nothing, but in the negative, это очень и очень.

We conclude our conversation with Maxim Zakharov - an algorithmic trading professional. FirstSecond Lifestyle of an exchange lonerStrategy of cubes It would be necessary to lay strawsLess timeframe - more secretsOil futures Lifestyle of an exchange loner - You are a member of the club of algorithmic traders? - Not, i'm a loner. But we have a certain company, which used to periodically meet at Smartlab conferences, while they were.   Neurocrine Biosciences Review: promising developments against rare diseases

We end the conversation with Maxim Zakharov, an algorithmic trading specialist. 1-2nd Lifestyle of an exchange lonerTactics from cubes It would be necessary to lay strawsLess timeframe - more secretsOil futures Exchange loner Lifestyle - You are a member of the club of algorithmic traders? - Not, i'm a loner. However, we have a certain company, which previously gathered from time to time at Smartlab conferences, while they were.   10 Bodo Schaefer's rules of money literacy