Marathon Digital (NASDAQ: MARA) - American company, which is engaged in bitcoin mining on an industrial scale. At the moment, the business occupies a leading position among competitors in terms of hashrate, that is, the total computing power, needed to create new blocks and receive rewards in the Bitcoin network.

The company creates and develops infrastructure for bitcoin mining on an industrial scale: for November, 2021 Marathon Digital reported on ownership 31 000 working devices, which together generate computing power 3,2 exahash per second, which allowed the business to independently mine 2712 bitcoins per year. The organization has approximately 7,649 bitcoins worth $437 million on its balance sheet., as well as 623 million cash. 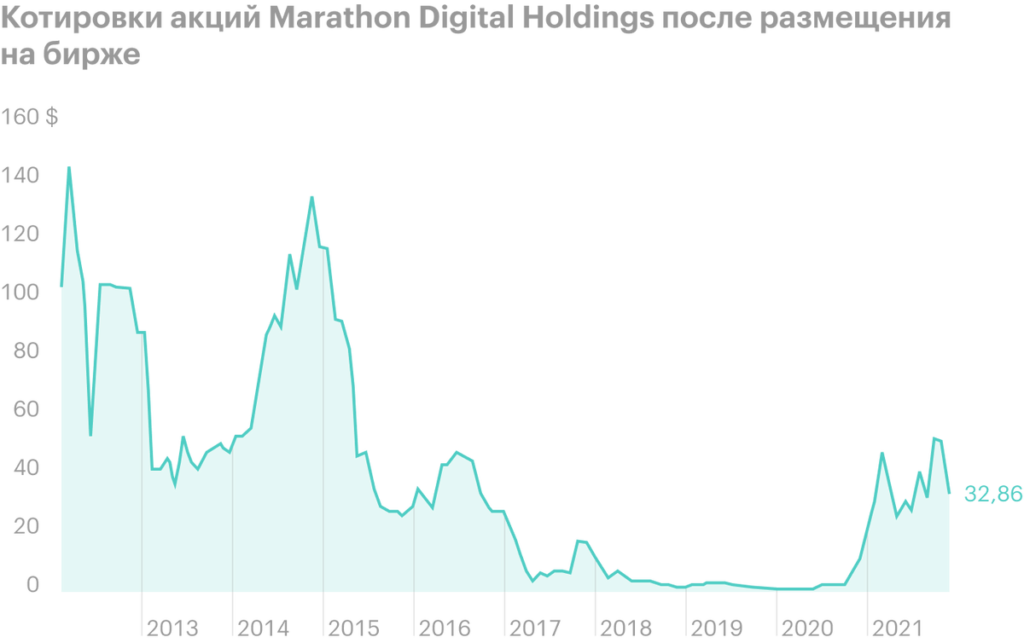 Expensive electricity. The company has the most unfavorable tariff for electricity consumption among its competitors: compared to the same Riot Blockchain, who pays 24 $ per MWh, Marathon Digital pays for the same volume 42 $ - almost twice as much. Given that, that the company has developed the largest total hashrate among competitors, Inflated electricity costs are putting increasing pressure on businesses.

Volatility and government regulation. The movement of the price of bitcoin alternately pleases investors with strong growth and cools their ardor with active corrections.: from recent all-time highs cryptocurrency lost order 30% cost. For her, this is quite normal., but at the same time it destroys the capital of short-sighted retail players in the market.

At the same time, the threat from state regulators remains., who, together with the banking system, are not too fond of the aggressive expansion of decentralized finance: only recently, the SEC in the United States did not allow two new cryptocurrencies to enter the market ETF от Valkyrie и Kryptoin. 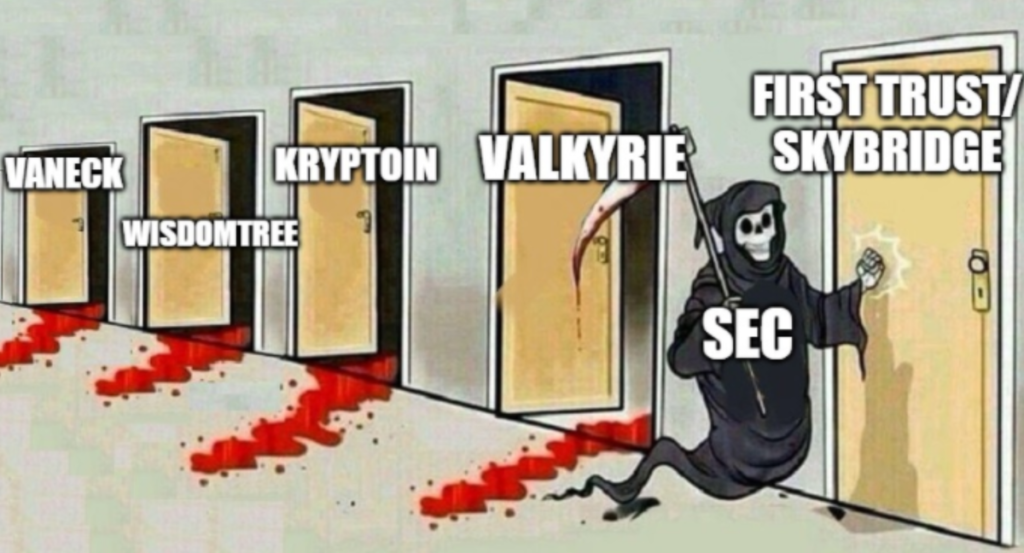 long term question. Most of the costs of all mining companies are the purchase of ASIC miners - specific "computers", with maximum efficiency performing work on the extraction of cryptocurrency. Bitcoin supply is limited 21 a million coins, And, calculated, they will be mined around 2140.

The prospect is distant, but there is a big question: what will companies then do with hundreds and thousands of miners, who have nothing more to gain? Supposed, that the source of remuneration for the formation of new blocks will ultimately be commission fees, but the prospects for such a transition are not completely clear.

Cryptocurrency. In the case of any company, which builds its business around bitcoin, crypto assets are the main risk factor, but at the same time, the main factor in the possible exponential growth of the share price. We can't see into the future, but those facts speak in favor of "digital gold", that bitcoin has already managed to grow hundreds of times and cover the whole world with intranet transactions.

The number of issued coins is strictly limited, which greatly reduces the risk of inflation, and the cryptocurrency itself is increasingly reaching the level of entire states, which confirms the recent example of El Salvador. Therefore, in the long term, the entire business tied to the extraction and accumulation of cryptocurrency, seem to be, a bright future awaits - he just needs not to go broke before his onset.

Hashrate Leader. Among the main competitors, Marathon Digital owns the largest hash rate - the total computing power, needed to mine bitcoin and receive rewards for creating a new block in the blockchain. At the moment, the company has developed capacity 3,2 exahash per second and plans to more than quadruple this figure by mid-2022 to 13.3 exahash per second. 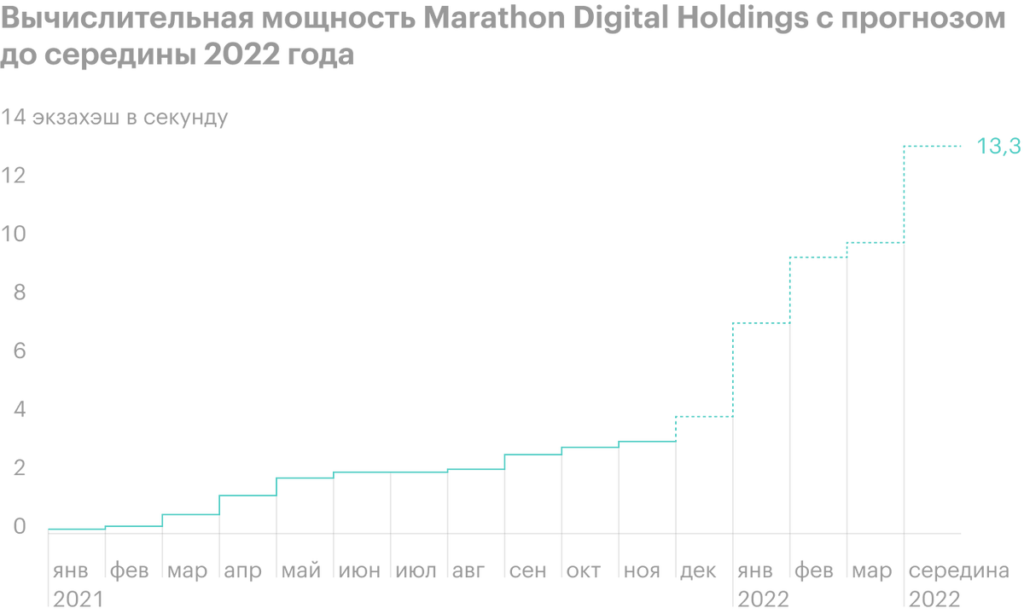 And again, taking care of ESG. Like all other crypto miners, Marathon Digital Vulnerable to Public Attacks on Bitcoin Mining. In a recent presentation, the company highlighted a separate slide numbered 12, to present to investors their greening plan. By the end of the first quarter of 2022, carbon neutrality should be 70%, and by the end of the year, the mining process should reduce carbon emissions to zero.

Marathon Digital stocks are another opportunity to invest almost directly in bitcoin through stock market. The company bears all the risks, related to crypto assets, therefore, investing money here is related to the attitude of potential investors to the field of decentralized finance. Someone will have an optimistic attitude and faith in the "economy of the future", and others will share Charlie Munger's skepticism and also find bitcoin disgusting. In any case, winners and losers will be determined by time..

There’s a big difference between predicting that something will happen in the market and the reality of actually getting into and out of trades Consistent trader has attained a mindset — a unique set of attitudes — that allows him to remain disciplined, focused and confident in spite of adverse conditions Everyone ends up learning something about market, few ever…

​​ $SPCE Why Virgin Galactic Shares Fall Again? Will Virgin Galactic conduct space flight tests next month or not? Space tourism company Virgin Galactic plummets for second straight session on Thursday, closing on 3,8% Fall, and a fraction of a percent lower on wednesday.   Tyson Foods shares rose by 9% after quarterly report

Teladoc (NYSE: TDOC) - American site, on which clients are provided with services in the field of telemedicine. The company shows a good level of improvement, but the limitations of the format do not allow this sector to be considered truly promising.. And this is not good news for the owners of the company's shares..   Trust management (private trader)

We conclude our conversation with Maxim Zakharov - an algorithmic trading professional. FirstSecond Lifestyle of an exchange lonerStrategy of cubes It would be necessary to lay strawsLess timeframe - more secretsOil futures Lifestyle of an exchange loner - You are a member of the club of algorithmic traders? - Not, i'm a loner. But we have a certain company, which used to periodically meet at Smartlab conferences, while they were.   U.S. Ryanka Survey (NYSE NASDAQ AMEX) on 24.07.2013

We end the conversation with Maxim Zakharov, an algorithmic trading specialist. 1-2nd Lifestyle of an exchange lonerTactics from cubes It would be necessary to lay strawsLess timeframe - more secretsOil futures Exchange loner Lifestyle - You are a member of the club of algorithmic traders? - Not, i'm a loner. However, we have a certain company, which previously gathered from time to time at Smartlab conferences, while they were.   Pfizer Tablet, Airbnb sales record and collapse of Moderna and Peloton shares

Alrosa (MCX: ALRS) — mining company, world leader in diamond mining and a monopoly in Russia. 16 April, the company published operating results for 1 quarter of 2021.   Investidea: Digital Insurance, because the economy is not important