In early February, AMD submitted a report for the fourth quarter of 2021, which pleasantly surprised investors: The company's quotes rose by 5%.

AMD's core business is the development and production of central, graphics and hybrid processors, chipsets and systems on a chip, referred to as SoC. The American company divides its business into two parts, based on customer principle:

As for the fourth quarter figures, the Computers & Graphics segment increased by 32% to $2.584 billion over the period on the back of strong sales of Ryzen and Radeon processors. Division "Corporate, built-in and custom systems” has grown even stronger — by 75% to $2.242 billion due to strong demand for EPYC processors and custom solutions.

S&P 500 drew the "cross of death". What does this mean and what do the statistics say?

Free cash flow increased in the fourth quarter, compared to last year's results, from 0.480 to 0.736 billion dollars and decreased, when compared with the data of the third quarter of 2021, from 0.764 to 0.736 billion dollars - largely due to strategic investments in long-term supply chains, which in the future, as planned by management, must maintain accelerated growth rates.

The main idea is the rapid growth of AMD's financial results - the company has shown phenomenal growth rates over the past five years., which annually increase by an average of 30-35%, mainly due to the results of the segment "Corporate, built-in and custom-made systems». For example, its revenue doubled in 2021 thanks to the growing adoption of AMD EPYC processors among cloud and enterprise customers.

Main question, which interests investors, Will the company be able to maintain this pace in the future?. AMD management considers, that at least in 2022 they will be able to maintain the current momentum - largely due to the expansion of their current portfolio and the launch of the next generation of PC products, games and data centers.

If in the fourth quarter of 2021 the main player in the company's sales was the Ryzen processor 5000, whose sales grew at a double-digit rate, everything can change in 2022.

At the beginning of 2022, management at CES announced the start of sales of new generation processors: Ryzen 6000 series with new Zen core 3+. At the same event, the first public demonstration of Ryzen processors took place. 7000, which should provide a significant performance boost over current Ryzen processors in the future. Ryzen 7000 scheduled to hit the market in the second half of 2022.

Additional fuel for growth in 2022 could be consolidation Xilinx results. At the end of January, AMD received permission to merge from the National Bureau of Antimonopoly Policy of the People's Republic of China., it remains to wait for a decision from the FTC - the US Federal Trade Commission. If there is no force majeure, then the AMD-Xilinx merger should close in the first quarter of 2022. 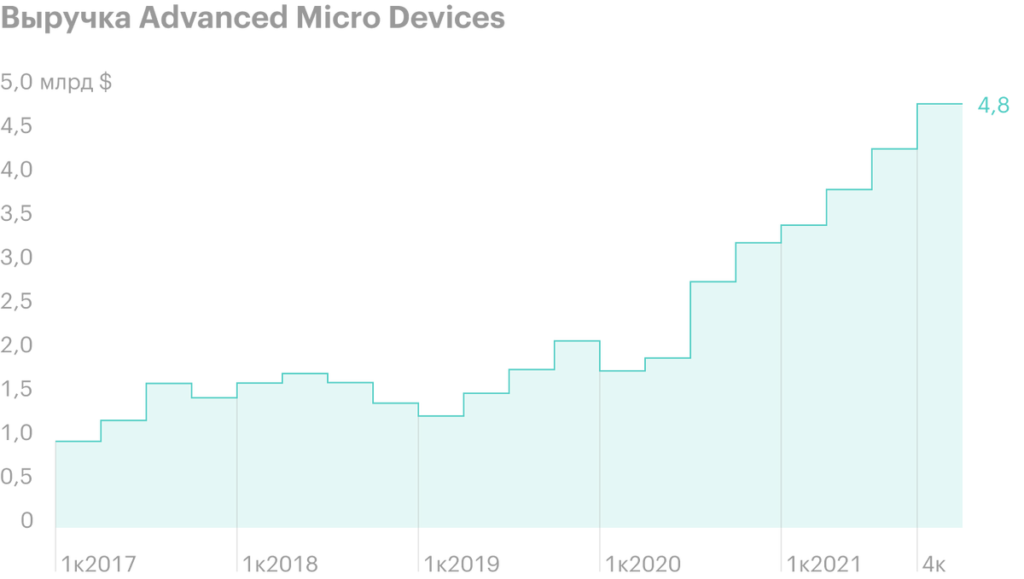 AMD has shown explosive growth over the past five years, which allowed the company to significantly outperform its main competitors. The COVID-19 pandemic has driven even more growth as users around the world moved from offline to online, demand for AMD products has grown exponentially.

Comparison of AMD with market benchmarks

Which forex bank to choose?

AMD releases strong Q4 2021 financial results and announces excellent guidance for Q1 and all of 2022, which exceeded the wildest expectations of investors. The company plans to increase its revenue by 45% up to $5 billion against the consensus forecast of $4.33 billion, and for the whole of 2022 31% to 21.5 billion dollars with a forecast of 19.26 billion dollars.

Following the publication of such amazing results, analysts at nine investment houses raised their target prices for AMD.

​​ $SPCE Why Virgin Galactic Shares Fall Again? Will Virgin Galactic conduct space flight tests next month or not? Space tourism company Virgin Galactic plummets for second straight session on Thursday, closing on 3,8% Fall, and a fraction of a percent lower on wednesday.   Analytics Reuters vs Bloomberg

Teladoc (NYSE: TDOC) - American site, on which clients are provided with services in the field of telemedicine. The company shows a good level of improvement, but the limitations of the format do not allow this sector to be considered truly promising.. And this is not good news for the owners of the company's shares..   A new reporting season starts in the US