EQT CorporationEQT38,31 $BuyService in partnership with Tinkoff Investments. Quotes are updated every 15 minutes

EQT Corporation (NYSE: EQT) - American energy company from Pittsburgh, state of Pennsylvania, which traces its uninterrupted history from its founding at the end 19 century. The basis of the business is the production and sale of natural gas and LNG. The company's shares are traded on the New York Stock Exchange.. 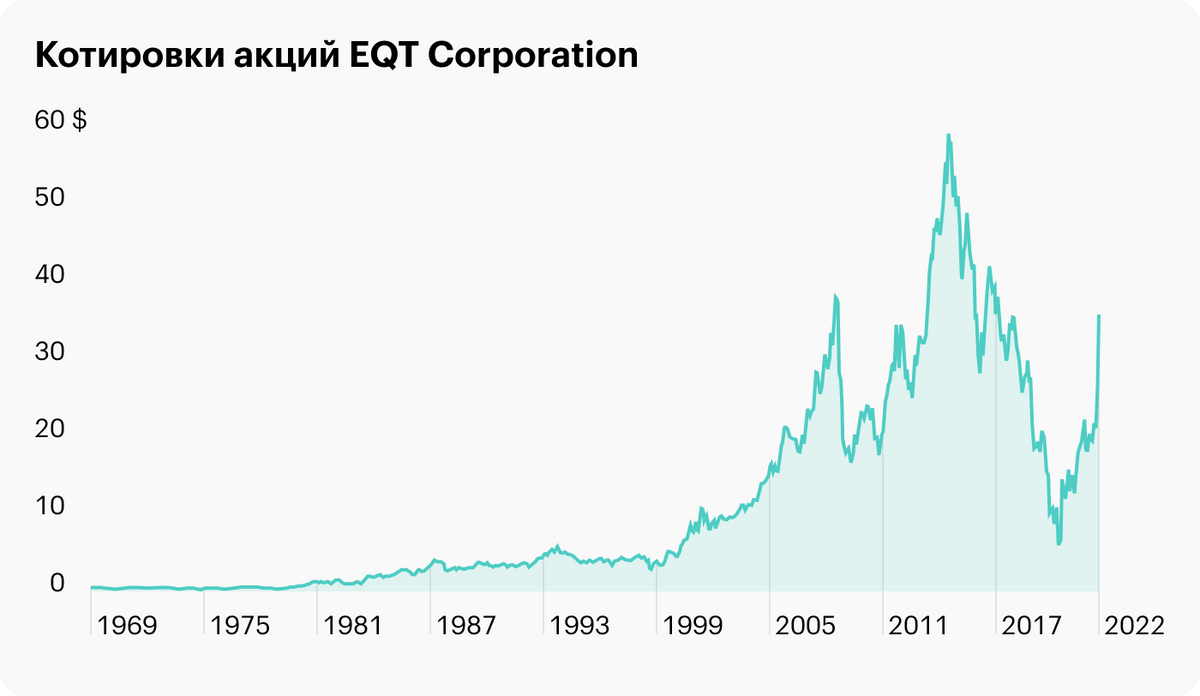 In 2017, the company became the largest player in the US gas market and now continues to produce natural gas in natural and liquefied form. EQT is most active in the Marcellus Shale, Upper Devon and Utica and carried out in several states:

The company uses horizontal drilling technology to extract gas, which allows you to extract more resources from fewer deposits and, unlike vertical drilling, turns out to be economically more profitable., and also reduces the environmental impact.

EQT uses hydraulic fracturing in its activities without damaging groundwater: the depth of application of the technology is located 1800 meters below the level of fresh water. 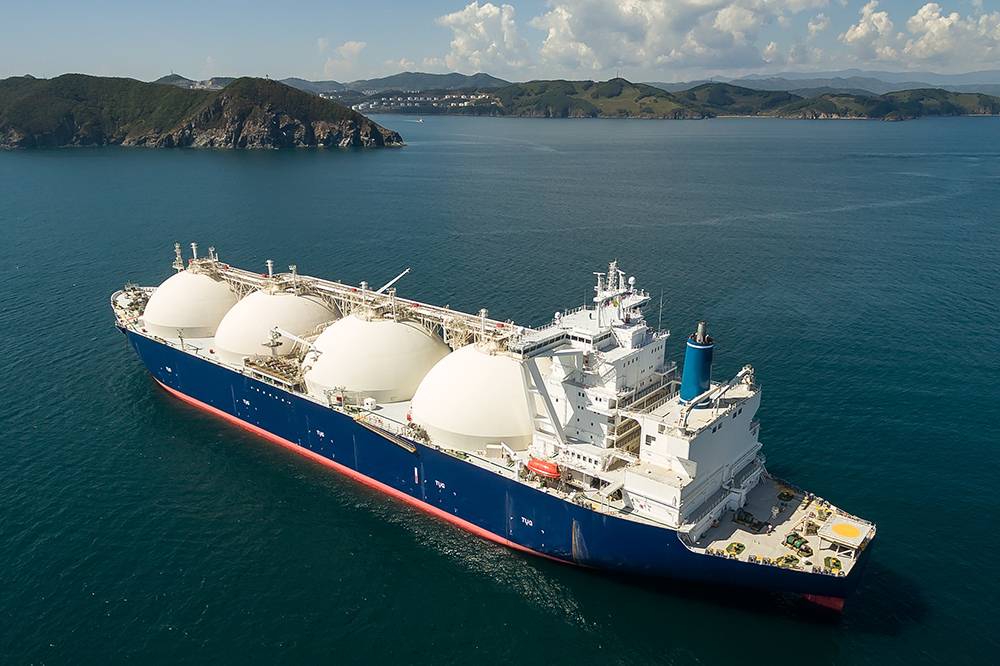 Unprofitableness. The company has been unprofitable since 2018, and the negative value of the multiplier P / E has been increasing for five consecutive years. Resource mining is rarely compared to tech start-ups or up-and-coming biotechs., investors who are more tolerant of the company's chronic losses and are willing to hold shares in the hope of a rapid increase in their price in the future, but in the case of a large gas producer, a five-year history of compounding losses is worrisome.

ROI is not the best either.. ROE, which reflects the effectiveness of the use of share capital by the company, also adds to the negative: in 2018, it fell the most and began to recover little by little in subsequent years, but still retains a two digit negative value. It turns out, that the invested money of shareholders at the end of 2021 conditionally worked at −11.49%. That is, for every share invested 100 $ the investor lost almost 11,5 $. 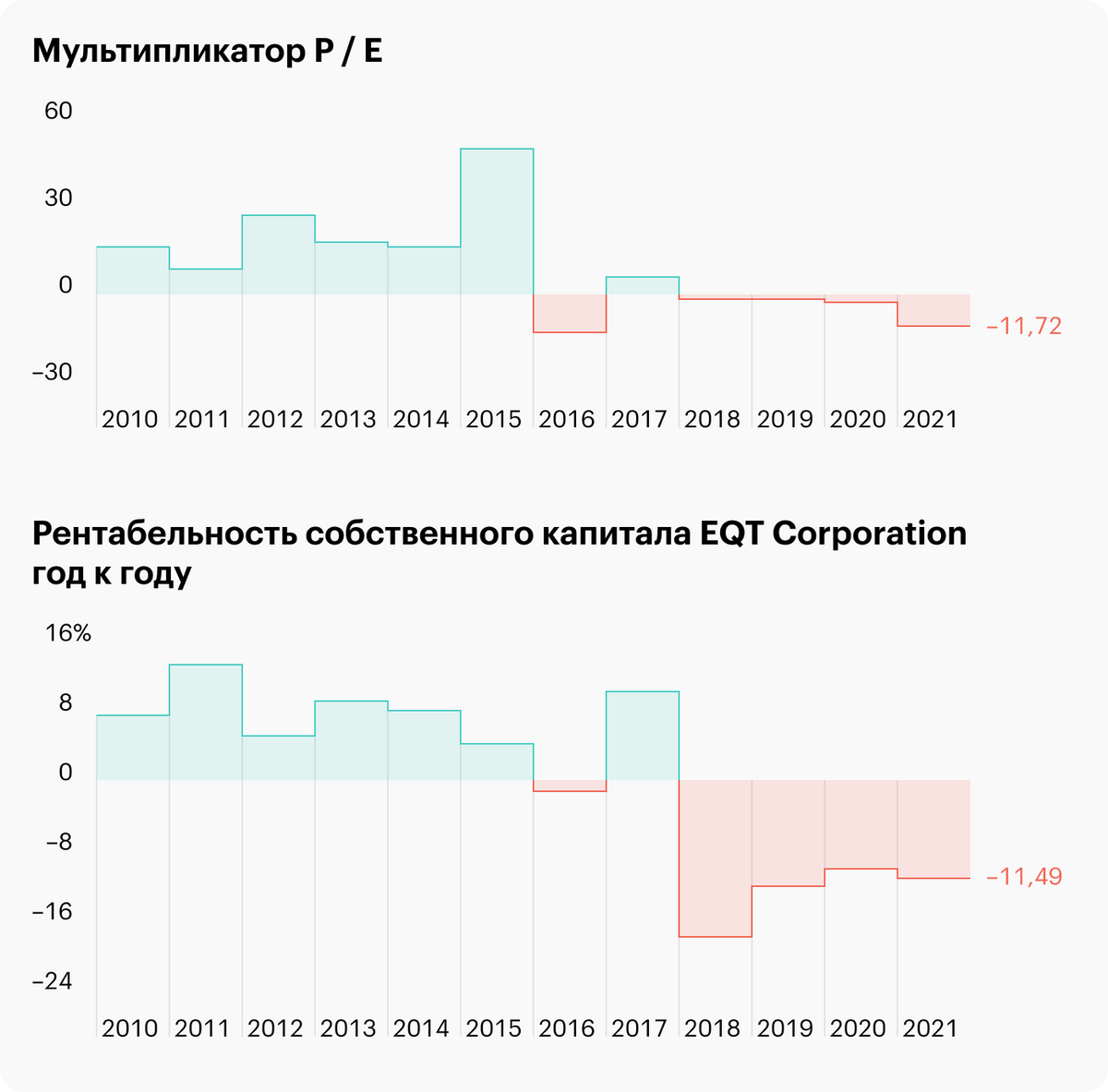 Not all officials are business-friendly. Habitual impression, that all government agencies and employees in the United States unanimously support domestic manufacturers and exporters in the common work for the good of America, in fact, it is not so clear.

For example, in November 2021, Senator Elizabeth Warren openly accused US gas exporters of artificially raising prices, from which the company's management and its investors get rich, and the final consumer of their product has to pay for the greed of corporations. In her criticism, the senator, in addition to EQT, also addressed other large companies in the oil and gas sector.: ConocoPhillips, ExxonMobil, coterra, BP, Antero Resources, Chesapeake Energy, Ascent Resources, Southwestern Energy, Range Resources и Occidental Petroleum.

Later, company representatives responded, in which they noted the baselessness of the attacks of Senator Warren and recalled that, what is the price in the commodity market, including gas, formed according to supply and demand, and not only at the will of manufacturers.

As a result, such a skirmish at the official level gives a good idea of, that the situation in the American oil and gas sector is not so cloudless, as it may seem at first glance.

Focus on LNG as a sustainable alternative to coal. EQT promotes a big project - Unleashing US LNG, which aims to reduce CO₂ emissions into the atmosphere by replacing coal in the world market with American LNG.

The company approves, what coal consumption outside the US generates 48% all emissions, which has an extremely negative impact on the environment and should become practically the main problem on the agenda of the world's fight against global warming.

The presentation proposes to include the initiative in Biden's Build Back Better legislative plan., and it seems, that such an initiative can bring significant profits to the business.

Beneficiary of political decisions. In the light of new sanctions against Russia and the desire of European countries to reduce dependence on Russian gas, EQT can significantly increase its presence in the European market and gain additional opportunities to expand the sales market.

In support of such prospects, the EU and the US already signed a deal at the end of March to supply Europe with additional volumes of US LNG., which, within the framework of the agreements, should replace the order 10% of supplied Russian gas by the end of 2022.

Fines, prison sentences and unclear terminology: what the Russian Ministry of Finance proposed to the bitcoin industry

Debt load is normal. The company is not drowning in debt and keeps key indicators under control: the ratio of liabilities to assets at the end of 2021 is 54% relative to the usually acceptable value of 60-70%, and the financial leverage ratio debt / equity, which shows the ratio between debt and equity of a business, Is 1,15 with normal values ​​in the range from 1 to 2. 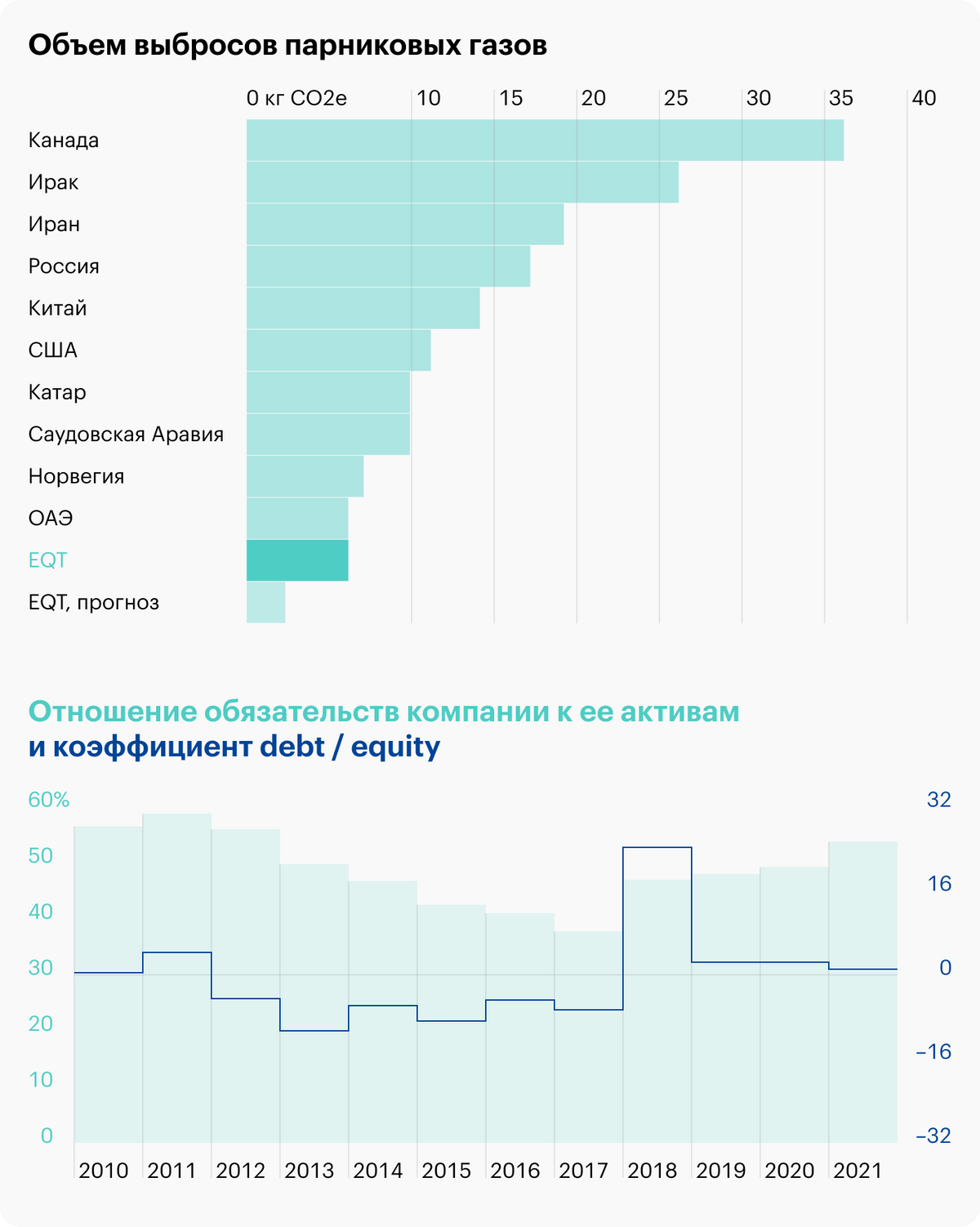 In the current political reality, great prospects open up for EQT: the largest US gas producer benefits from the global "green" agenda with the replacement of coal and other "dirty" energy carriers with its product, and Europe's request to reduce the share of Russian gas creates a potentially large sales market in the EU countries.

Among the company's problems are chronic unprofitability and poor profitability., but these negative factors can hardly be attributed to insurmountable. So far, the impression, that the insider buying of the CEO and CFO in August 2021 was a deliberate decision by management.

Teladoc (NYSE: TDOC) - American site, on which clients are provided with services in the field of telemedicine. The company shows a good level of improvement, but the limitations of the format do not allow this sector to be considered truly promising.. And this is not good news for the owners of the company's shares..   S&P 500 entered the bear market. This is how it ended before