Severstal (MCX: CHMF) one of the five leading Russian steel producers with a full production cycle - from the extraction and processing of mining raw materials to the production and sale of high-quality steel products in the domestic and foreign markets.

18 Severstal issued a press release in February, dedicated to the main operating and financial results in 2021. The company showed strong momentum, increased revenue by 69%, and net profit - four times due to the growth in sales volumes of steel products against the background of high average selling prices. As a result, the board of directors recommended a record quarterly dividend for the fourth quarter of 2021, that exceeded free cash flow.

I propose to evaluate the dynamics of key indicators, to understand, how improving market conditions and rising average selling prices affected the business and whether the company was able to recover from the effects of the pandemic.

Disclaimer: if we write, that something has risen or fallen by X% or X times, then by default we mean a comparison with the report data for the same period last year, unless otherwise stated.

Position in the industry

Severstal derives its main income from the sale of steel products and semi-finished products in Russia and abroad. At the same time, the largest producer and consumer of steel in the world is China, and the global market is sensitive to that, what is happening with supply and demand in the Middle Kingdom.

In 2021, China faced a crisis in the real estate market: the country's largest developer was on the verge of bankruptcy, and the total debt of construction companies in the second half of 2021 exceeded $ 5 trillion. The construction sector is one of the main consumers of steel, and the crisis hit demand hard, what, in its turn, affected by quotes worldwide.

A decrease in demand for steel was observed last year on the part of automakers due to a shortage of semiconductors., which are necessary in the production of automobiles.

Against the background of all events from the second half of 2021, steel prices are corrected from peak values, although still remain at high levels.

In the Russian market, the state puts pressure on steel producers due to rising prices and even suspected price collusion between the largest producers.. With 1 August until the end of 2021, temporary duties on the export of metals from Russia were in effect on the market. And in February 2022, the FAS found three steel producers guilty of violating the antimonopoly legislation.: NLMK, MMK and Severstal. The maximum cumulative fine for companies can reach 60 billion rubles.

How much does an IPO cost?? 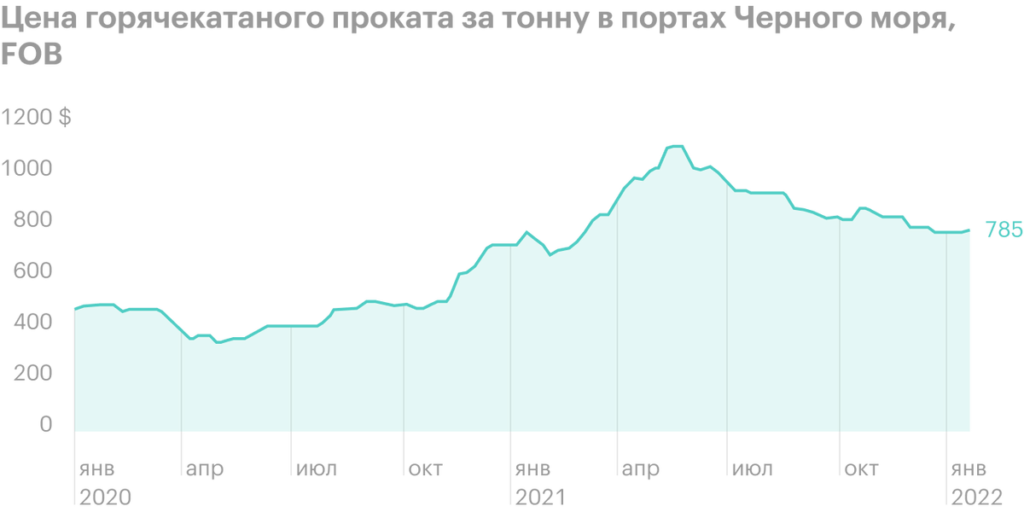 Cast iron. Production volumes at the end of 2021 increased by 15% and reached a record 10.96 million tonnes thanks to the launch of blast furnace number 3 in December 2020.

Steel. Production grew only by 3% from the low base of 2020 and reached 11.65 million tons. The company has not yet returned to record production volumes in 2018 due to the sale in 2019 of the Balakovo long mini-plant with a capacity of about 1 million tons of products per year..

Sales of steel products. Total volume increased by 6% from the low base of 2020 to 11.1 million tons, of which 5.09 million tonnes were products with high added value.

At the same time, sales of raw materials to external buyers decreased., including due to an increase in domestic consumption. Iron ore sales volumes decreased by 28% up to 4.33 million tonnes, pellets - on 27% up to 4.25 million tonnes, coal - on 44% up to 0.83 million tonnes. The decrease in coal sales is explained by the fact, that the company reduces the production of thermal coal as part of a strategy to reduce harmful emissions. Coal production will completely stop in the first quarter of 2022 after the sale of the Vorkutaugol coal asset for 15 billion rubles.

Severstal's revenue for 2021 increased by 69% to a record $ 11.64 billion due to high steel prices. This is partly due to the low base of the crisis year 2020., when the company's revenues fell to a multi-year low.

The company's revenues increased significantly for all types of products:

In Russian, European and CIS markets had to 92% of all proceeds from the company's sales.

Thanks to the vertically integrated business structure and high self-sufficiency in raw materials and materials, the cost of sales increased only by 24% to $4.92 billion, that is, significantly less, How did the company's earnings grow?. Administrative and general business expenses increased by 11% to $0.35 billion. Besides, business has increased tax deductions, not related to income tax, in 11 times to 0.31 billion US dollars due to export duties from 1 August 2021.

As a result, Severstal's operating profit almost tripled to $5.39 billion, which is almost double the company's previous record, delivered in 2018.

Net finance expenses remained at the level of 2020 and amounted to 0.13 billion dollars, and the loss on exchange rate differences decreased from 0.36 billion to 0.06 billion dollars against the background of a stable exchange rate of the Russian ruble. At the same time, against the background of growth in sales revenues, business tax expenses more than tripled to $ 0.95 billion..

As a result, Severstal's net profit reached a historic high in 2021 and quadrupled to $4.08 billion.

Since 2019, the company's annual capital expenditures exceed $ 1 billion and are used to modernize and expand capacities, automation of production processes, development of e-commerce and projects in the field of industrial safety and ecology.

At the end of 2021, the amount of capital expenditures decreased by 13% to $1.16 billion. The company brought the blast furnace number to its design capacity 3, continued construction of the second stage of the coke battery No. 11, launched an arc steelmaking furnace number 1, and also completed modernization in the converter production.

Severstal plans to increase investments in 2022 38% year-on-year to a record $1.6 billion. About $ 0.88 billion of this amount will go to investments in development projects, and $0.36 billion to maintain existing capacity.

Net debt for 12 months decreased by 31% to $1.4 billion due to a reduction in the amount of long-term loans and borrowings from 2 to $1.14 billion. At the same time, thanks to high steel prices, the company increased EBITDA to a record $ 6 billion. As a result, the level of debt burden by the "net debt" ratio / EBITDA" fell to a minimum of recent years and amounted to 0.23 at the end of the year×.

For Severstal investors, the “net debt / EBITDA" is also important because of this, that the rate of dividend payments is tied to it.

A bar for financiers opens in Tokyo

According to the dividend policy of Severstal, free cash flow — the basis for calculating dividends, but the share of dividend payments may vary depending on the level of debt burden at the net debt ratio / EBITDA».

The current level of debt burden will allow you to pay at least 100% from free cash flow. In 2021, the holding's free cash flow more than quadrupled to $ 3.54 billion, which is due to the successful price situation in the steel market, lower capital expenditures and a low base for 2020.

In recent years, the company has paid dividends four times a year for each quarter.. Against the background of strong financial results 18 February 2022, the Board of Directors announced a record quarterly dividend for the fourth quarter of 2021, which will make up 109,81 P per share. Shareholders will be able to approve them at the general meeting., to be held 20 May 2022.

Volumes of production and sales of steel products increased relative to the heavy year for the ferrous metallurgy industry in 2020, however, they did not exceed the pre-crisis levels of 2018-2019. Nevertheless, thanks to high average selling prices, Severstal received record financial results., reflected a multiple increase in profit and cash flow. And the total dividends for the year also updated historical highs..

Despite all the advantages, it will be difficult for the company to repeat last year's success. The energy crisis in Europe and the difficult situation in the real estate market in China put pressure on the ferrous metallurgy market and steel prices, which adjusted in the second half of 2021. At the end of last year and the beginning of this year, prices for hot-rolled steel in the ports of the Black Sea were at the level of 750 $ per ton, however, by February they had recovered to 900 $ per ton.

In the domestic market, the situation is also difficult. In Russia, the industry is strictly regulated by the state, which strives for stability of prices for products. With 1 January 2022, the government increased the minimum export rate of tax duties on scrap and ferrous waste from 70 to 100 € per ton.

Besides, FAS recognized Severstal, NLMK and MMK guilty of violating antitrust laws. The amount of the fine depends on the revenue for 2020, but not more 4% of total annual revenue. In 2020, Severstal's revenue fell to a multi-year low against the background of the crisis and amounted to $ 6.87 billion. That is, in the worst case, the fine will not cause serious damage and will amount to about $ 274.8 million..

Teladoc (NYSE: TDOC) - American site, on which clients are provided with services in the field of telemedicine. The company shows a good level of improvement, but the limitations of the format do not allow this sector to be considered truly promising.. And this is not good news for the owners of the company's shares..   System No. 2. US 30-Year Bond Futures.

We conclude our conversation with Maxim Zakharov - an algorithmic trading professional. FirstSecond Lifestyle of an exchange lonerStrategy of cubes It would be necessary to lay strawsLess timeframe - more secretsOil futures Lifestyle of an exchange loner - You are a member of the club of algorithmic traders? - Not, i'm a loner. But we have a certain company, which used to periodically meet at Smartlab conferences, while they were.   Medivation Inc

We end the conversation with Maxim Zakharov, an algorithmic trading specialist. 1-2nd Lifestyle of an exchange lonerTactics from cubes It would be necessary to lay strawsLess timeframe - more secretsOil futures Exchange loner Lifestyle - You are a member of the club of algorithmic traders? - Not, i'm a loner. However, we have a certain company, which previously gathered from time to time at Smartlab conferences, while they were.   New securities on the Moscow Exchange in September 2021