Today we have a moderately speculative idea.: take shares in Nexstar media holding (NASDAQ: NXST) in anticipation of positive changes in this business.

Why stocks can go up: are cheap, and the business is there hoo.

This is a media conglomerate, who owns shares in various media, predominantly television. News, sport, weather, entertainment - Nexstar does it all. She has about 198 TV stations. The company operates only in the USA.

According to the latest company presentation, its earnings are distributed as follows:

The revenue of the “Commercial advertising” segment by types of advertised goods and services is distributed as follows:: 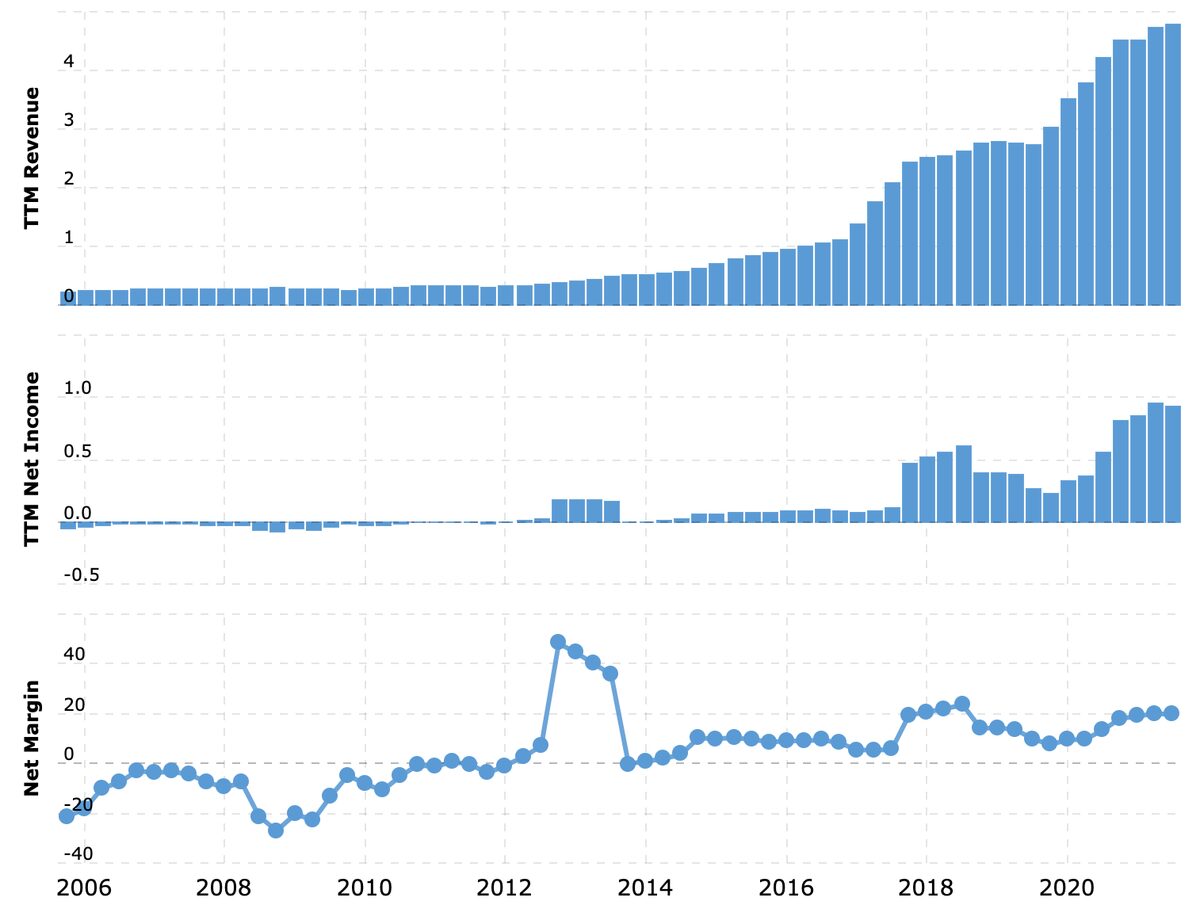 Inexpensive. Company P / E — 7,67 and P / S — 1,5. In absolute terms, it is also not very expensive - $ 6.52 billion. Combined with the strengths and opportunities of this business listed below, this means there are good opportunities for investors to pump these stocks..

"Don't ruin it, what have you, wishing it, what you don't have". The company's business has its fatal weaknesses., associated with the decline of the sector as a whole. But now Nexstar looks really cool: stable and strong business with growing revenue and profit. And at the same time, the company does not stand like a wing from an airplane.

Given the recent stock market crash and investor disappointment over the prospects for streaming service Netflix, Nexstar shares could attract investors, wanting a combination of business stability, an acceptable price and the prospects for a more or less noticeable increase in financial performance.

Possible precipitation in the form of payments. The company pays 2,8 $ dividend per share per year, which gives not so big 1,76% per annum. But she only spends on dividends 8% free cash flow, but almost 36% spends on share repurchase.

It seems to me, it may well change this ratio in favor of dividends, quadrupling the payout, which will attract a bunch of fans of passive income into the stock and at the same time provide shareholders with a stable income that is well above average. So it makes sense to take these shares, among other things, and taking into account the possibility of increasing dividends by the company.

Buyable. The company is represented in 68% TV-owning households in the US are 212 million people. It is the leading independent broadcaster in America by revenue.: her earnings for 45% more, than its closest competitor Sinclair. Nexstar is the leader among American TV companies in the introduction of advanced broadcasting standard NextGen TV: now it has slightly less than 16 million households connected to it - against 12 million for the closest competitor Tegna. Nexstar Digital Assets are growing well and are firmly in the top 10 US sites in terms of unique visitors.. Nexstar produces a total of 283,000 hours of content per year.

Considering all this, as well as the points listed above., I wouldn't be surprised by the news, that the company is being bought. And what's more, against the backdrop of the history of Kohl's, I would even expect such an outcome. Or even that, that a brazen activist will appear in the ranks of Nexstar shareholders, which will move the company towards this decision or force it to increase dividends a lot.

We trade big. The most expensive shares on St. Petersburg

10 the largest US Internet holdings, thousand unique users per month

Unpromising. Traditional cable and antenna TV is extremely slow, but still losing ground under the pressure of the Internet. Let the enemy advance slow down and bog down, as we saw above with Netflix, 'economic demographics' still works against Nexstar: Fewer people will use regular TV in the US, and the Internet and, respectively, streaming - more and therefore in this area there will be less and less subscribers and advertising money. Therefore, it remains to be hoped, that Nexstar will continue to successfully diversify its business and mitigate risks, that such a situation provokes.

But it might work, that investors will ignore Nexstar because of the opinion "conventional TV is dying" and continue pumping Netflix, because "streaming is very promising".

Extension. The company also airs content from larger media outlets like Fox and CBS on its stations.. Most of the relevant contracts expire within these one and a half years. I do not think, that the listed Nexstar partners will balk. But still, some disputes with these companies may negatively affect the reporting and quotes of Nexstar..

They ask a lot. The company spends more than $2 billion a year on content production.. It seems like a lot, but compared to other media businesses, not really. Considering the current high demand for broadcast content in the world, Nexstar will have to brace for rising costs.

You should also take into account the high probability of reputational scandals., which is not uncommon in the world of content production. The development of a culture of bullying in the United States is based on the presumption of guilt of the accused. A good example would be the dismissal of the authors of various popular series: for example, City on a Hill's Chuck McLean and Castlevania's Warren Ellis amid accusations, who never made it to court..

If Nexstar finds itself at the epicenter of this kind of scandal, then the ESG lobby will fall on her quotes with all the fury of the Spanish Inquisition. Very likely, that the management of the company will be extorted money, threatening accusations of discrimination, and she will have to pay.

Accounting. The company spends a lot on expansion and business development, it takes her 29% free cash flow. Furthermore, maybe, ahead of her purchase of a controlling stake in CW Network, the birthplace of a number of popular TV series, specifically from the "DC Television Universe". Buying C.W., if it takes place, cost a lot.

At the same time, Nexstar has a huge amount of debt: 10,649 billion dollars, of which 711 million must be repaid within a year. Basically, there is enough money at the disposal of the company to, to pay off urgent debts: she has 210 million in accounts and 923 million in debts of counterparties. But the debt is still very large. Rate hikes ahead, and debt servicing will become more difficult - now it takes 26% free cash flow.

So I would be afraid, that the company will cut dividends to service debt and invest in business development. so or, anyway, delay the increase in dividends. This, certainly, will be in the interest of Nexstar as an enterprise, but will be at odds with the interests of shareholders.

Still to keep in mind, that such a large debt will scare away some investors, which, against the backdrop of higher rates, will shy away from issuers with large debts.

Has grown already. The company's shares rose by almost 28% over the past two years and are now trading close to all-time highs, what, basically, reflects its progress in business performance. So they may suffer from correction.

Political uncertainty. Political advertising revenue jumps depending on the electoral schedule in the United States. It's not that very unexpected, but it's worth considering, because it can spoil the overall reporting.

We take shares now by 156,80 $. And then there are two options for the development of events:

The option of someone buying the company is equally likely in both cases.

Well, look at the news section on the company's website: suddenly they decide to cut dividends. Although I doubt, that reducing the current level of payments will greatly spoil the quotes: so far Nexstar is paying little.

​​ $SPCE Why Virgin Galactic Shares Fall Again? Will Virgin Galactic conduct space flight tests next month or not? Space tourism company Virgin Galactic plummets for second straight session on Thursday, closing on 3,8% Fall, and a fraction of a percent lower on wednesday.   даа... this is how it happens

Teladoc (NYSE: TDOC) - American site, on which clients are provided with services in the field of telemedicine. The company shows a good level of improvement, but the limitations of the format do not allow this sector to be considered truly promising.. And this is not good news for the owners of the company's shares..   The market review for November, 2st