Monster Beverage (NASDAQ: MNST) is one of the world leaders in the production of energy drinks. For 85 over the years, the company has grown from a family business into a world-famous brand in the markets of more than 150 countries.

Monster Beverage business is divided into three segments: Monster Energy, Strategic Brands and more, to which the results of the American subsidiary American Fruits relate & Flavors, purchased in 1 quarter of 2016.

The company has many competitors, from Red Bull to Coca-Cola Energy. except them, companies from related areas are trying to enter the energy drink market, who sell iced tea, coffee, juice cocktails and other drinks.

When it comes to the manufacturing process, then management built it on the basis of outsourcing: third-party businesses supervised by Monster Beverage bottle and package beverages from the Monster Energy and Strategic Brands segments. Like in the USA, and abroad, the company does not have its own factories. This is done to increase revenue and reduce costs..

Strategic Brands. The company acquired the segment in 2015 as part of a deal with Coca-Cola, according to which she received a minority share in 16,7% share capital of Monster Beverage and the entire business, non-energy drink. In return, Coca-Cola gave away its own energy business. 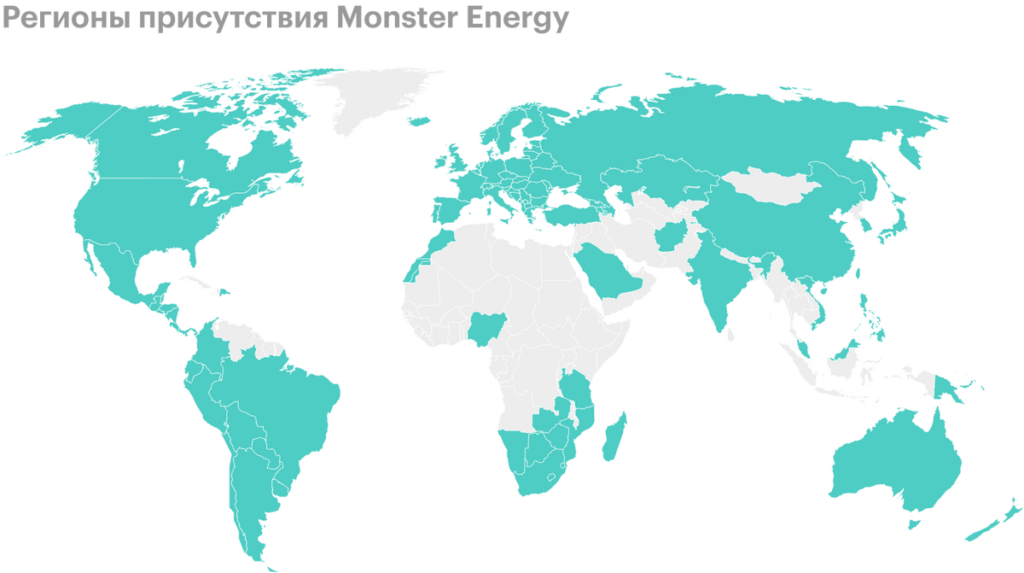 Monster Beverage - An American Growth Story, which over the past five years has increased its financial results by 50%. This was due to the expansion of the beverage line and the growth of the overall global market for energy drinks.. At the same time, if you look only at the indicators of the covid era, then the work of management deserves the most flattering marks: sales in 2020 and 2021 accelerated to record annual rates in 10 And 20% due to increased demand in all regions.

Most profitable stock 21 century. At the beginning of 2021, RBC Investments magazine compiled a rating of foreign companies, that have generated the most returns for their shareholders over the past 20 years. Monster Beverage became the leader of the rating: taking into account the additional issue in 2012, the company's shares grew 1200 times, with 0,07 to 88,94 $.

Recognizability. Monster Beverage products are well known to a wide range of people thanks to large-scale advertising.. The company sponsors many cultural and sporting events. Main competition list, who are supported by Monster Beverage:

Market share. Monster Beverage is the world's second largest energy drink company after Red Bull. At the same time, if we take into account subsidiaries, then the total market share of the company exceeds 35%.

The top five in the energy drink market

Market growth. According to the forecast, the market of non-alcoholic energy drinks from 2018 to 2025 will increase annually by 7.2% and will amount to $ 86 billion by the beginning of 2026. Analysts believe that the main reason for further growth is the increase in consumption of products, in particular young people, who prefer to mix energy drinks with alcohol. We do not recommend doing this..

Profit distribution. Monster Beverage invests in the future growth and development of all earned money. The company does not pay dividends and does not buyback of shares, even taking into account that, that the last buyback program is still not closed. The balance on it is about 442 million dollars, and in the event of a strong fall in securities on the stock exchange, management has the right to use them to maintain quotes.

Consequences of the coronavirus. The company is still feeling the negative impact of the coronavirus, which leads to additional transportation costs due to the disruption of global supply chains. It is mainly about the inefficiency of transportation, unavailability of trucks, lack of shipping containers, congestion at ports of entry and delays in obtaining certain ingredients.

They, who trades the American market

Monster Beverage is a good emitter, whose growth rate is almost 3 times outperform the general market: 20 against 7% from other representatives of the sector. In 2022, there is a possibility of a merger with the alcohol company Constellation Brands, a producer of Corona Extra beer brands, Special model, Kim Crawford, witnesses, High West whiskey and other products.

If the deal is successful, the combined company will enter the top 5 largest beverage companies by capitalization in North America after Coca-Cola, PepsiCo, Diageo and European Anheuser-Busch InBev with a total market capitalization in the region of 90-100 billion dollars.

​​ $NOK That's why Nokia shares soar Investors welcomed the company's growth, dealing with networking, through 5G. Nokia shares jumped by 11% on Thursday after, how a telecommunications equipment manufacturer posted surprisingly strong first quarter results.   We analyze the operational report of PIK for 2021 year

​​ $SPCE Why Virgin Galactic Shares Fall Again? Will Virgin Galactic conduct space flight tests next month or not? Space tourism company Virgin Galactic plummets for second straight session on Thursday, closing on 3,8% Fall, and a fraction of a percent lower on wednesday.   They, who trades the American market

Teladoc (NYSE: TDOC) - American site, on which clients are provided with services in the field of telemedicine. The company shows a good level of improvement, but the limitations of the format do not allow this sector to be considered truly promising.. And this is not good news for the owners of the company's shares..   Investor Calendar: Tesla, Twitter and Facebook will release reports