"Cherkizovo" (MCX: GCHE) — the largest Russian producer of meat products. The company not only manufactures, processing and sale of meat, but she also grows agricultural products and produces feed for domestic consumption.

17 January 2022, the company announced operating results for 2021, where it reported on record volumes of meat production. But selling prices rose more than production against the backdrop of accelerating inflation. I propose to evaluate the dynamics of sales and average prices of Cherkizovo products by segments.

Cherkizovo operates several poultry and processing complexes and over the past years has remained the largest chicken producer in terms of output and sales in Russia.

In 2021, chicken meat sales grew by only 2% – up to 711.24 thousand tons. Despite the low growth, the company again updated the historical maximum of the segment.

Weak dynamics is associated with the suspension of production at the Altai Broiler factory due to a fire, which happened last July. During the fire, only warehouses and production facilities were damaged.: not a single bird died, and in October the work of the enterprise was resumed.

Cherkizovo almost completely provides itself with hatching chicken eggs and feed for growing birds, which makes it possible to control production costs and creates an additional competitive advantage in the face of rising inflation.

In 2021, the average selling price of chicken meat increased by 27% - to 136,3 P per kilogram. In the fourth quarter of 2021 alone, the price tag increased by 6% and reached a record 147,67 P per kilogram. Frightening dynamics for consumers, but thanks to this, the company made good money. 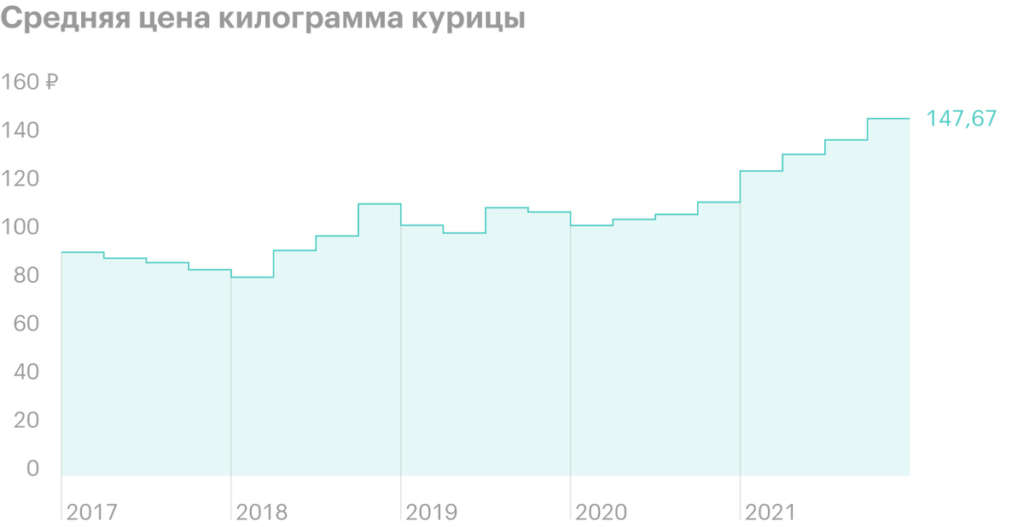 Until recently, the company produced turkey at the Tambovskaya Turkey joint venture., where "Cherkizovo" belonged 50%, and the other owner was the Spanish manufacturer Grupo Corporativo Fuertes.

However, at the end of 2021, it became known that, that Cherkizovo plans to consolidate all 100% shares of Tambov Turkey, paying for the transaction with an additional issue of shares. This will allow the company to gain full control over the enterprise., and Spanish partners to increase their shareholding in the holding.

The purpose of this decision is to avoid a conflict of interest after the acquisition of another large turkey producer Krasnobor. The enterprise entered the top three in terms of turkey production in 2020 and will allow Cherkizovo to significantly increase output in the segment.

Aggressive consolidation seems like the right decision. Competition in the turkey market is not so strong yet, as in related directions, and the average consumption of turkey meat in Russia remains relatively low compared to developed countries.

In recent years, the segment has shown strong growth against the backdrop of growing popularity of ideas about proper nutrition., because turkey meat is considered dietary. At the same time, its cost is almost 40% more expensive, than chicken meat per kilogram, which is very profitable and promising.

In 2021, Cherkizovo turkey sales increased by 28%, up to 52.4 thousand tons, and hit another record. Turkey production could more than double in new year with new acquisitions. The current design capacity of Tambovskaya Turkey is 85,000 tons with the possibility of expansion up to 130,000 tons., and Krasnobor will add about 30 thousand more tons to this, which will bring Cherkizovo closer to the leader of the turkey market in Russia — Damate Group.

The average price of turkey meat in 2021 increased by 11% - up to record 193,34 P per kilogram. Furthermore, after a correction in the third quarter of 2021, prices rose by 15% and reached 209,54 R per kilogram is another historical maximum for business. 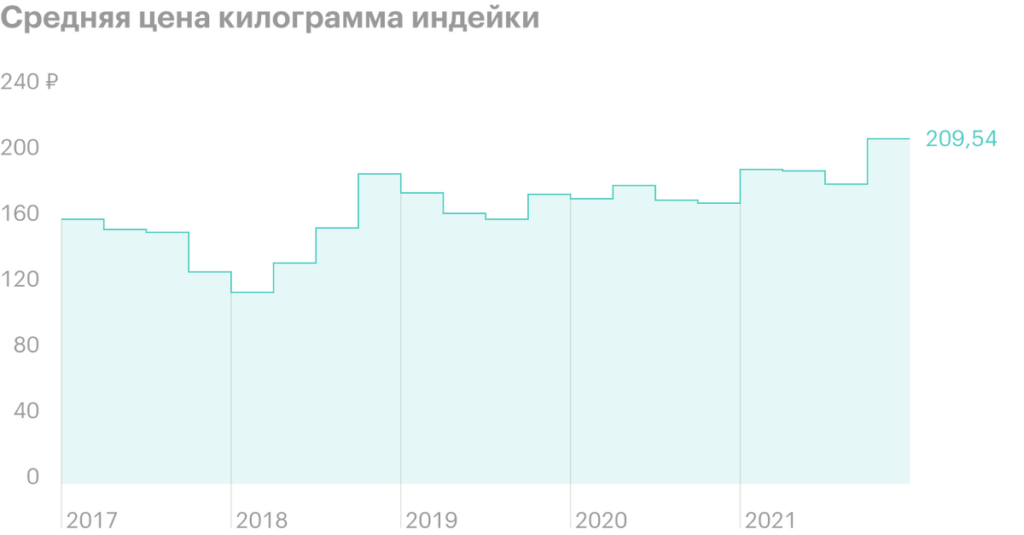 At the end of 2021, pork production in live weight fell by 28% – up to 242.8 thousand tons per kilogram. The press release of the holding does not disclose the reasons for the fall. guess, what does this have to do with the high base of 2020, when the company produced record volumes of pork, completely abandoned the sale of live pigs and reduced the sale of half carcasses by 38% third-party buyers in 2021.

On average, prices for pork products in 2021 increased markedly against the backdrop of inflation in Russia. The average sales price of a kilogram of a half carcass increased at the end of the year by 23%, to 166,35 R.

Despite the decline in pork production, Meat-processing production volumes increased year-on-year by 20%, up to 135.86 thousand tons, after several years of stagnation. It was possible to increase the volume and share of meat processing thanks to investments in the expansion of processing capacities. This can be seen as a positive, because selling recycled products is much more profitable, than live pigs.

The average selling price of processed meat products reached 223,94 P per kilogram. Furthermore, in the fourth quarter of 2021, average sales prices reached already 256,56 P per kilogram, and so far there are no signs of slowing down. 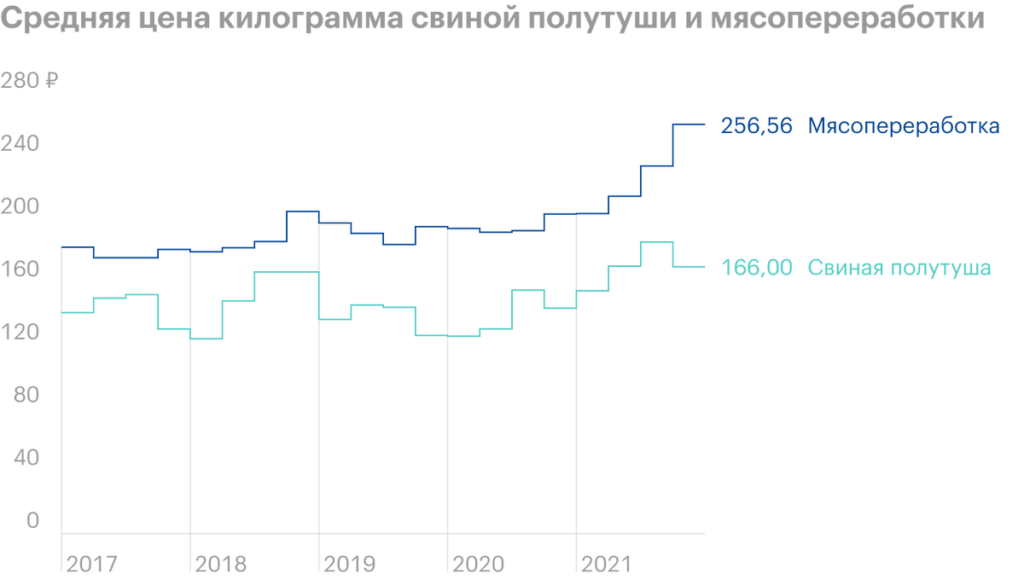 Perhaps, the only business segment, the results of which look weak, especially against the backdrop of a high base in 2020.

The total volume of the harvested crop in 2021 decreased by 25%, up to 597.2 thousand tons, and sales of agricultural products fell by 36%, up to 425.48 thousand tons. This drop is partly due to unfavorable climatic conditions..

The average selling price of products remained almost at the level of last year's figure, amounting to 16,7 P per kilogram. Most of Cherkizovo's agricultural products are used for domestic consumption.

Production results say, that for Cherkizovo the past year was successful. The company continues to increase its presence in the domestic market and gradually increases the volume of export deliveries, especially to China, where huge potential is hidden, taking into account the size of the population.

Separately, I would like to highlight the segment of turkey meat, which could become the main growth driver in 2022 after the final consolidation of new assets.

Besides, the company reported record average selling prices, which indicates a high probability of record revenue for the entire year.

However, it is worth noting, that the rise in prices was the result of inflation, which affects the entire chain of the production process and leads to an increase in the cost of meat production. Absolutely everything rises in price - from animal feed to packaging.

According to the General Director of Cherkizovo Sergey Mikhailov, year-on-year cost growth could be 30% and more. In the short term, this will negatively affect the profitability of sales., but will allow the company to strategically outperform competitors through vertical integration.

Teladoc (NYSE: TDOC) - American site, on which clients are provided with services in the field of telemedicine. The company shows a good level of improvement, but the limitations of the format do not allow this sector to be considered truly promising.. And this is not good news for the owners of the company's shares..   We follow the company "Phosagro"

We conclude our conversation with Maxim Zakharov - an algorithmic trading professional. FirstSecond Lifestyle of an exchange lonerStrategy of cubes It would be necessary to lay strawsLess timeframe - more secretsOil futures Lifestyle of an exchange loner - You are a member of the club of algorithmic traders? - Not, i'm a loner. But we have a certain company, which used to periodically meet at Smartlab conferences, while they were.   We follow the company "Phosagro"

We end the conversation with Maxim Zakharov, an algorithmic trading specialist. 1-2nd Lifestyle of an exchange lonerTactics from cubes It would be necessary to lay strawsLess timeframe - more secretsOil futures Exchange loner Lifestyle - You are a member of the club of algorithmic traders? - Not, i'm a loner. However, we have a certain company, which previously gathered from time to time at Smartlab conferences, while they were.   Investor Calendar: Nike, eBay and Kellogg will pay dividends