3M is a huge industrial conglomerate, engaged in the production of goods and the provision of services in very different industries: from the production of parts for displays and medical equipment to adhesive tape and stickers.

The company's annual report gives us a more or less complete picture of the structure of its revenue.

Security and Industry — 36,4%. Segment operating margin — 20,9% from its proceeds. By type of goods, the revenue of the entire company from this segment is divided as follows::

Transport and electronics — 27,6%. Segment operating margin — 20,55% from its proceeds. By type of goods, the revenue of the entire company from this segment is divided as follows::

healthcare — 25,6%. Segment operating margin — 23,75% from its proceeds. By type of goods, the revenue of the entire company from this segment is divided as follows::

Consumer segment — 16,6%. Segment operating margin — 21,31% from its proceeds. By type of goods, the revenue of the entire company from this segment is divided as follows::

The total amount is more 100%: from it it is necessary to subtract mutual settlements between segments. 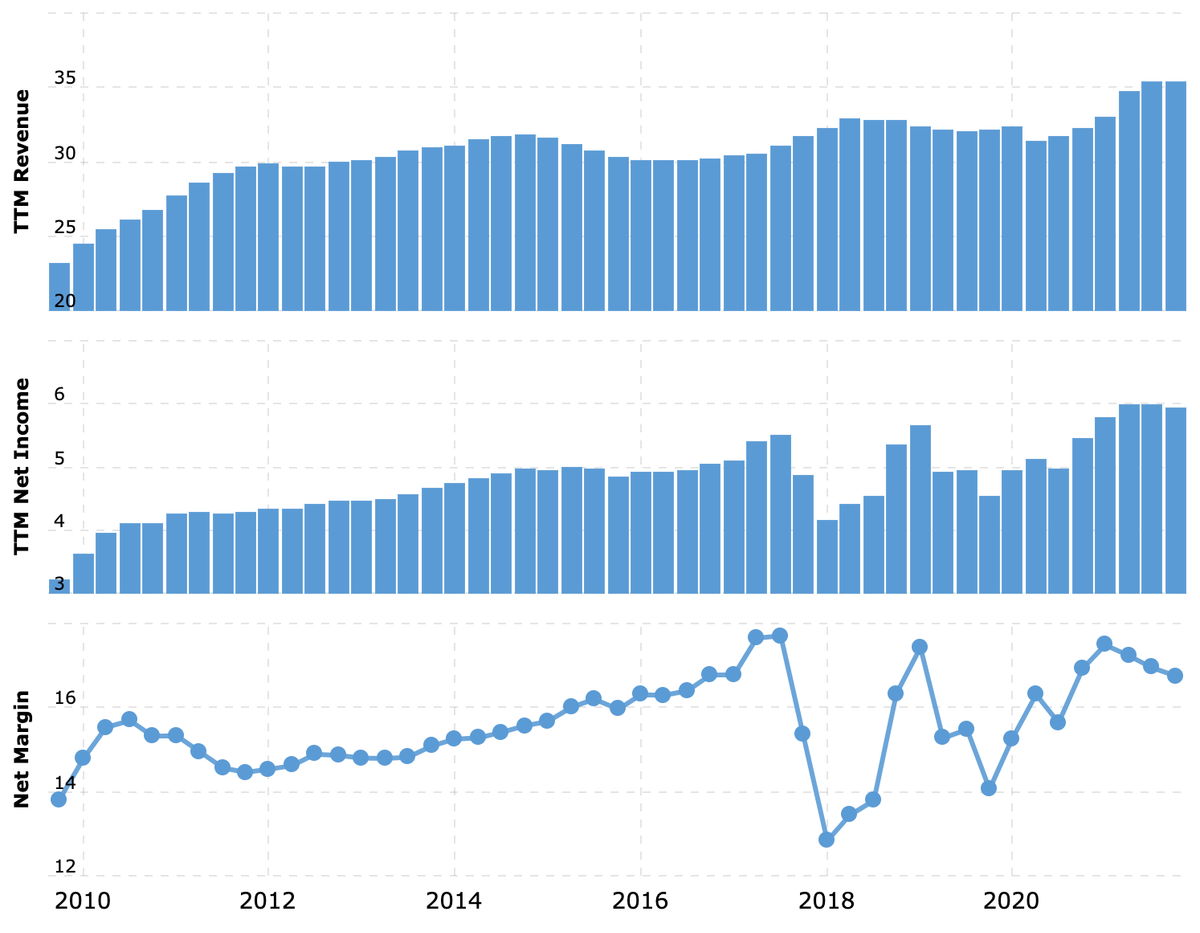 Strongly. Diversification and overall high level of development of 3M's business make it very stable. Don't expect crazy growth here., but different divisions of the company will balance each other - therefore, there is no need to be afraid of a strong fall either. The company as a whole survived the corona crisis with dignity. And this is a big plus in our turbulent times..

Dividends. The company pays 5,96 $ per share per year, what gives 3,99% per annum. This is a big profit, and this fact may well attract many lovers of passive income into the company's shares.

Combined with good dividends and the overall stability of the company's business, this could attract institutional investors into the stock.. This is an important point, because in absolute numbers 3M is not cheap: its capitalization is almost 85.1 billion.

Doesn't grow. Now 3M shares are significantly cheaper, how 5 years ago, although its operating results are much better. Understandably, that there are reasons for this - the lawsuits of the company. But, strictly speaking, their situation has been going on for years., and the company's business continues to function successfully.

In the current circumstances, an investor may appear, which will require decisive action from 3M management, aimed at improving the situation of shareholders. For example, increase in dividends - now the company spends about 58,89% from your profit. This is a lot, but, given the good business performance and the unacceptable price situation, it would be possible to achieve an increase in payments - so that 80-90% of the profits are spent on them. 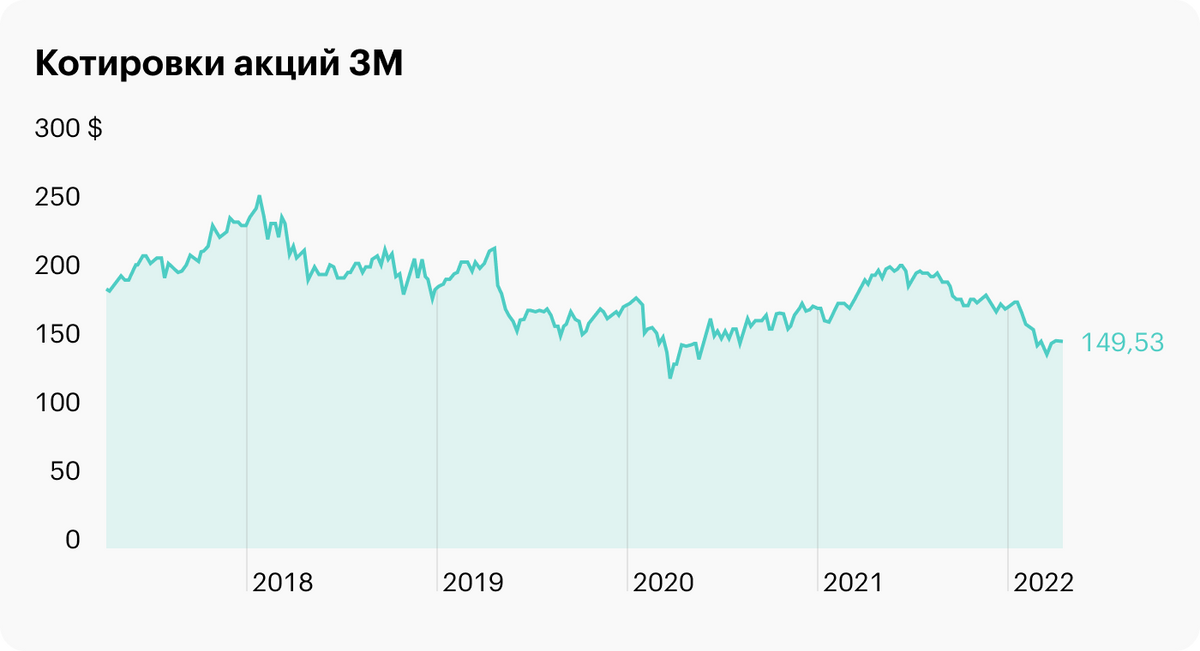 And 3M could split under pressure from an activist investor. Separately, its parts can grow much more vigorously., than a single 3M, so such an outcome would be a boon for its shareholders. The company already has quite a lot of experience in selling off its divisions.: she is so big, that it has a lot of divisions, which 3M management may consider non-core. And she can spend the money received from the sale on investments in more marginal segments..

3M may well sell off some of its divisions, without splitting the company as a whole, - for the sake of increasing marginality and as part of the cajoling of an investor-activist. Such an activist, maybe, even be able to put his people on the board of directors of 3M - and they will undertake the implementation of this reform program. This is a very likely option..

There is also such an option: as a compromise, 3M will begin to pay increased attention to software development, which is very popular among industrial companies. Is considered, that this contributes to the growth of the business margin and allows you to level the risks of "physical" businesses. This option can breathe new life into the company's quotes..

Conservative part of the portfolio: ICD-12

Here is such a Caulaincourt turns out. During its work, 3M has inherited no less than MMM. U.S. Army veterans are suing the company: according to their version, 3M supplied the army with defective earplugs, the use of which over time led to hearing loss and the development of tinnitus. Last week, a US court ruled against 3M and ruled, that the company would have to pay the two veterans $58 million.

In the United States, approximately 300,000 lawsuits have been filed against the company on this topic - of this mass, the courts have so far considered only a small part.: in 8 cases ruled in favor of the plaintiffs, in 5 cases - in favor of 3M, also in 8 cases, the courts refused to consider cases.

Understandably, that 3M will sue, seeking to reduce the amount of compensation. AND, certainly, all these courts will drag on for a very long time. But the consequences of this lawsuit could be devastating for the company..

Parallel to this, another case is underway regarding the poisoning of harmful environmental chemicals around 3M manufacturing plants in Belgium.. The company plans to spend approximately 167 million to eliminate the negative consequences of its activities, but independent analysts estimate the amount of possible spending in the range from 10 up to 30 billion. For understanding: 3M's annual revenue is just under $6 billion.

Both cases pose a big threat to 3M. And the situation with earplugs in general can bury the company. The presence of such a weight on the legs of 3M is a problem for its shareholders from several sides..

Firstly, this not only limits the company's potential for dividend increases, but also greatly increases the risk of their complete abolition.

Secondly, this severely limits the success potential of a hypothetical activist investor campaign. Gigantic threats of this kind cannot be corrected by any replacement of directors.. As Epicurus said in such cases, "bad is the philosopher's argument, that does not alleviate human suffering.".

At the same time, this fact increases the likelihood that, that 3M will be divided into parts. We have before our eyes a similar example of Johnson & Johnson(J&J). She has a large number of potential liabilities in the "asbestos case", and the company plans to get out of this situation by maneuvering, known as the "Texas Two-Wayer": spin off one division into a separate company, hang on it all current and potential consumer claims liabilities and let it go bankrupt.

Actually, behind that J&J and is divided into parts. It seems to me, example J.&J may follow and 3M.

The problem is, that in the event of a company split, for example, on 4 part investors will receive shares, among other things, and issuer, whose quotes are very likely to fall by 99,999%, and its shares will be delisted. Or will the company go bankrupt even sooner?, which can completely nullify all the achievements of quotes of other issuers. I highly doubt that, that the problems with Belgium and earplugs will miraculously disappear by themselves.

Well, finally, we can't even predict, when and how will the situation with these litigations be resolved, - it will take a long time. However, for 3M shareholders, this is rather a plus: lawsuits can drag on for years. I'm sure, that 3M lawyers will make the most of the American judicial system and flood the court with appeals.

Logistics. The production and business of the company are scattered around the world., even though more than half of the employees and equipment are located in the USA. Means, its business will suffer from logistical costs and the rising cost of raw materials.

Not glued. The idea of ​​dividing the company into three issuers threatens to stumble over its organizational structure: all 3M divisions are powered by its single R&D department, where new products are developed and old ones are improved.

This is a very important point.: among industrial conglomerates, 3M is known for its huge spending on new product development. This is why the company may not be divided into different issuers: different operating units have the same source of strength - laboratories and test sites of a single 3M.

Accounting. The company has $31.995 billion in debt, of which 9.035 billion must be repaid within a year. Money at the disposal of 3M is not so insanely much: 4,564 billion in accounts plus 4.66 billion debts of counterparties. But, considering all the above circumstances, as well as the company's needs for investments in the renewal of fixed assets, she suddenly needs money, And she can cut payouts, what causes stocks to fall. It's a theoretical threat, but still it should be kept in mind.

3M would make a great investment idea, but there are a couple of caveats. For example, litigation risks for tens and hundreds of billions of dollars.

In general, the company offers investors quite a lot.: good dividend yield, stable diversified business and, finally, its stock has good upside potential due to an imminent attack from an activist investor.

​​ $SPCE Why Virgin Galactic Shares Fall Again? Will Virgin Galactic conduct space flight tests next month or not? Space tourism company Virgin Galactic plummets for second straight session on Thursday, closing on 3,8% Fall, and a fraction of a percent lower on wednesday.   Conservative part of the portfolio: ICD-12

Teladoc (NYSE: TDOC) - American site, on which clients are provided with services in the field of telemedicine. The company shows a good level of improvement, but the limitations of the format do not allow this sector to be considered truly promising.. And this is not good news for the owners of the company's shares..   The Holy Grail of Macroeconomics:Chapter 1. Japanese recession.