RUSALRUAL66.75 RBuyService in partnership with Tinkoff Investments. Quotes are updated every 15 minutes

"Rusal" (MCX: RUAL, HKEX: 486) is one of the world's largest producers of aluminum and alumina with a vertically integrated business. The company's share of global aluminum production in 2021 was about 5,6%, and in the production of alumina - about 6,3%. During the same period, about 36% the company's revenue came from Europe, and to the CIS countries - more 32%. Since 2010, Rusal's shares have been traded on the Moscow Exchange under the ticker RUAL and on the Hong Kong Stock Exchange under the ticker 486.

Rusal has two key shareholders. The controlling stake belongs to the holding En +, a significant share in which Oleg Deripaska has. Blocking stake - from SUAL Partners, whose beneficiaries are Viktor Vekselberg and Leonard Blavatnik. Share in 17,6% is in free circulation.

The main assets of the company are located in Siberia, the rest are distributed by regions of Russia and 12 countries of the world. By the end of 2021, the company employs more than 60 thousand people, and the book value of the enterprise exceeds 596 billion rubles. 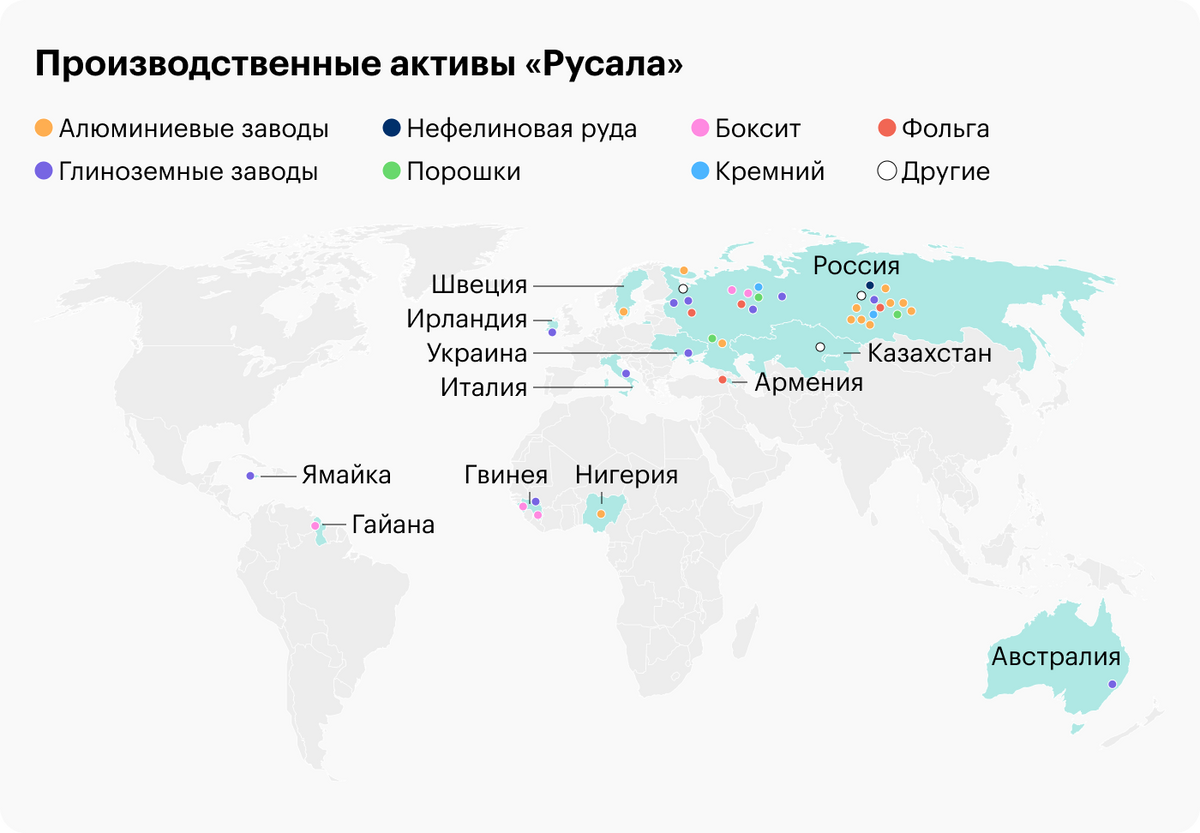 Aluminium segment. Includes 12 aluminum production plants: seven in Siberia, two more - in other regions of Russia, one in Sweden, one in Nigeria, it has been idle for many years, and also in 2021, the company acquired a bankrupt German factory. At the same time, Bratsky and Krasnoyarsky stand out among the company's plants.: each of them produces about a million tons of aluminum per year, and together they provide more than half of Rusal's aluminum production. Besides, the company has a joint BEMO project with RusHydro, in which, in particular, boguchansk aluminum plant is included.

The aluminum segment also includes the Downstream division for the production of end products.. The division includes 8 enterprises in Russia and one in Armenia, on which foil is produced, packing materials, aluminum powders, wheels and other products.

Netflix shares fell 20% after a slowdown in subscriber growth forecast

Alumina segment. Company 9 factories, producing alumina is technical aluminum oxide, which acts as a raw material for the production of pure aluminum. Geography of factories is extensive: four of them are in Siberia, one in Ireland, Of Italy, in Ukraine, in Guinea and Jamaica. Besides, have a share 20% in the huge Australian factory QAL.

Energy segment. Includes the Boguchanskaya HPP under the BEMO project with an installed capacity of about 3 GW. And in 2021, Rusal acquired a minority stake in its partner in the BEMO project, RusHydro.

Mining and Metals segment. It includes enterprises for the extraction of various minerals. Seven enterprises produce bauxite - aluminum ore for the production of alumina. Three of them are located in Guinea, two - in Russia, one each in Guyana and Jamaica. Almost all bauxite, mined at these enterprises, used at Rusal's alumina refineries.

Besides, Rusal owns two quartzite and two limestone mines, one each - fluorite and nepheline syenites. The company also owns two coal mines in Kazakhstan through a share 50% in a joint venture with "Samruk-energy" LLP "Bogatyr Komir". In Kazakhstan, Rusal has a joint transport company Mega Business and Alliance, and at the enterprise in Shelekhov, the company produces silicon.

Sales revenue. The company's revenues consist of two components: sales volumes and average selling prices. In the case of commodity companies, selling prices are quite volatile, because their products are commodities. In addition, its price is significantly affected by economic cycles..

The difference between sales revenue and cost of sales is called gross profit.. In order to calculate the net profit, from the gross subtract net operating and financial expenses, including tax payments and one-time items from non-cash revaluation of exchange rate differences and asset values.

Net profit. Allows you to evaluate the final results of activities in monetary terms. The indicator is used when calculating popular multipliers to assess the investment attractiveness of a business.

free cash flow. Difference between operating income and total expenses, except for the payment of a debt. The free cash flow indicator allows you to understand, how much money is left in the company after most expenses, including capital costs. Some companies use it as a basis for calculating dividends..

Coefficient P / E – the ratio of market capitalization to net profit. Determines, for how long can the company theoretically "recoup" the investor's investments in the issuer's securities.

Коэффициент ROE – the ratio of the company's net profit to its capital. Says that, how efficiently the company uses its capital compared to competitors.

LESSON 34. SALE OF OPTIONS. ENTRY INTO A POSITION AND ITS CREATION. PART 1

What's changed in the new report

Dynamics of key multipliers by year

📈 Why Stocks Can Go Up

Good business environment. Like many commodity companies, Rusal is good, when aluminum prices rise. Besides, don't forget, that Rusal is one of the lowest-cost aluminum producers in the world, which allowed him to remain profitable even in not the most favorable circumstances.

Possible resumption of dividend payments. If Rusal resumes dividend payments, which Russian investors love so much, this can be a good driver for the growth of the company's stock quotes.. Maybe, in the foreseeable future, this will happen - after all, a large minority shareholder of the company began to express dissatisfaction with the lack of payments - SUAL Partners.

ESG. In the field of ecology, Rusal is in a good position relative to its competitors. There are two major environmental issues in aluminum production.: significant costs of electricity and the by-production of a large amount of carbon dioxide. The company is tackling these issues in the following ways:

📉 Why Stocks May Fall

Besides, the aluminum sector is not the most enviable: world overcapacity, and aluminum is highly recyclable, which puts some pressure on its primary production.

Lack of dividends. Many Russian metallurgy and mining companies regularly pay dividends, and Rusal cannot boast of this.

Possible conflicts. Having two major shareholders can lead to conflicts - for example, based on the payment of dividends. Maybe, a new round of escalation of the corporate conflict awaits us soon: "Rusal" seriously reduced the debt burden, but it still needs significant capital expenditure to modernize its plants.

Formally, Rusal has a dividend policy, according to which 15% adjusted EBITDA to be paid as dividends, if covenants under loan agreements allow it. In reality, the company last paid dividends back in 2017..

🚨 What is important to know right now

No export. Australia has banned the export of aluminum raw materials to Russia. Bauxite was banned, alumina and aluminum ores.

"Rusal" suspended the work of the Ukrainian plant. We are talking about one of the largest alumina refineries of the company, located in the Nikolaev region. This was done due to logistical and transport issues..

Taishet Aluminum Plant launched. So far, the first stage with a capacity of 428.5 thousand tons of products per year has been launched. Investments in the project amounted to about 100 billion rubles.

The largest shareholders agreed on the allocation of part of the assets. His goal is to develop the company as a manufacturer of low-carbon aluminum. The new company will be engaged in the environmental transformation of assets with a higher carbon footprint..

Watching news : RBK www.quote.ru/shares/today_news.shtml www.k2kapital.com briefing.com bloomberg.com www.plan.ru/ Economic issues to be published: www.briefing.com/Investor/Public/Calendars/EconomicCalendar.htm If the reporting period, то Earnings Calendar :   Algo stock quotes for trader and investor: where to find and how to download? Free

Teladoc (NYSE: TDOC) - American site, on which clients are provided with services in the field of telemedicine. The company shows a good level of improvement, but the limitations of the format do not allow this sector to be considered truly promising.. And this is not good news for the owners of the company's shares..   Algo stock quotes for trader and investor: where to find and how to download? Free