Exchange NASDAQ in 2017 showed the most significant liquidity squeeze and a dramatic decrease in investor engagement in trading compared to 2011 among all major exchanges on the planet - almost in 3 Times (minus 61%). The Moscow Exchange is in second place - minus 56%2011 was chosen, how is the last year, on which the rapidly evaporating remnants of sanity remained. The ratio of trading volume to instrument capitalization is the most important indicator, which demonstrates the intensity of stock trading and the degree of investor involvement. 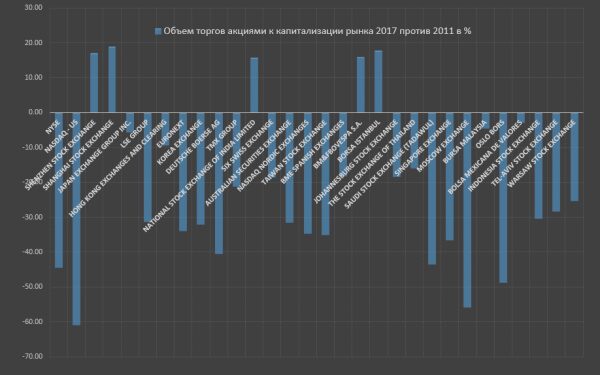 The growth of this indicator is only in China, India, Brazil and Turkey. All other markets collapse. NYSE minus 44%, Deutsche Boerse AG (Germany) minus 40%, LSE Group (United Kingdom) minus 32%It means, that the growth of stocks around the world does not attract new capital to the market simply because, that they do not physically exist.With the growth of global (мировой) dollar capitalization in 1.5 раза с 2011, trading volumes in dollars around the world grew less than, than on 10% – exclusively at the expense of China. Excluding China, the decrease in trading volume in monetary terms by 8%. If you don't count in money, and in promotions, then a decrease by almost a third (minus 40% without China), which corresponds to the trends in the ratio of trading volumes to capitalization - minus 25% (minus 35% without China). Ie. almost twofold contraction of trading in shares was offset by an increase in the value of shares, which led to a not so significant drop in the money turnover of trades.But it all means, that not only did new money not come, but the past is no more, which, as it were, hints at the artificial nature of the growth of markets a little less, than completely.The ratio of trading volume to capitalization in 2017 the highest on the Chinese stock exchange (Shenzhen Stock Exchange), then the Turkish stock exchange. Russia shows the worst performance among all major exchanges on the planet. Somewhere around Mexico and Indonesia )) 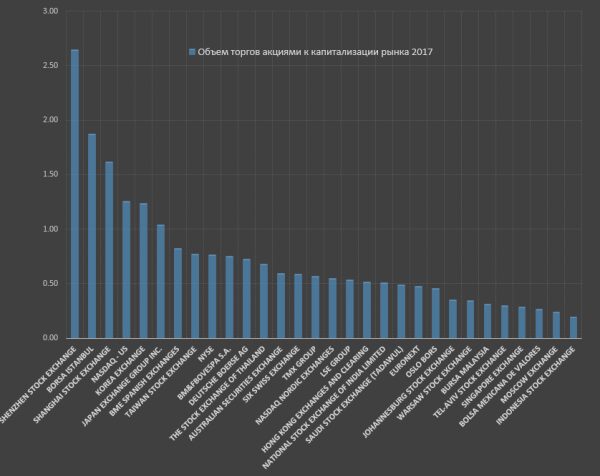 Investidea: Integer, because health is more valuable than stocks

The leaders in terms of trading volume are the US exchanges - 15.9 And 11.3 trillion respectively, followed by the Chinese exchange 9.1 And 7.6 trillion dollars per year. 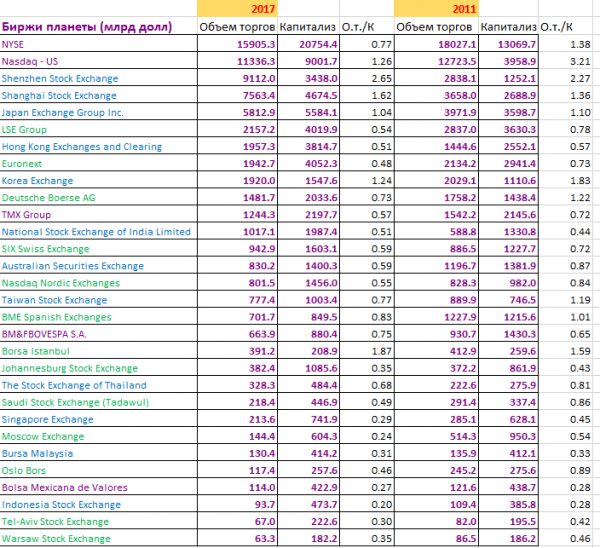 Average annual capitalization of shares in the table, and the total trading volumes. Exchanges are only those, trading volumes in which are higher 50 billion dollars per yearOn the Moscow Exchange, the share turnover amounted to 145 млрд долл за 2017, which is extremely low by world standards. Near Russia Malaysia and Mexico. But significantly higher than the Russian stock exchange of Saudi Arabia, Turkey, Brazil, South Africa, India, and even Thailand! In fact, Russia is still the weakest among all major developing countries.

Utah digital bank FinWise Bancorp, providing credit and deposit services throughout the United States, announced the decision to postpone the upcoming IPO. Earlier, the bank applied for attraction 58 million dollars, releasing 4,1 million shares (14% secondary) at a price from 13 to 15 Dollars.   Trade on paper: a waste of time or a sound teaching method?

Teads company, spun off from Altice to offer advertisers and publishers a digital ad platform, announced the withdrawal of the appeal for the IPO.   Paul A. Samuelson (May 15, 1915 – December 13, 2009)