"Raspadskaya" (MCX: RASP) — Russian coal company, which is one of the largest producers of coking coal in Russia with an annual production of more than 20 million tons. The company's products are supplied as raw materials to the metallurgical enterprises of the controlling shareholder - Evraz, and also sold in Russia and abroad.

21 January 2021, the company issued a press release with its 2021 production results.. Coal production reached a record high for the year thanks to the consolidation of new coal assets, however, sales plummeted 42% in kind.

I propose to understand the reasons for the fall, and study, how the scale of the business has changed after the consolidation of the coal assets of Evraz.

On consolidation on the basis of Raspadskaya

In 2020, the process of consolidating the coal assets of Evraz began on the basis of the Raspadskaya company controlled by the holding in order to create the largest player in the Russian coking coal market. At the end of 2020, the deal to acquire the Yuzhkuzbassugol coal company for RUB 67.74 billion was completed. Coal reserves of the united company reached 1.9 billion tons.

The main production assets of the combined company are located in the Kemerovo Region and the Republic of Tyva and include eight mines, two coal mines and three processing plants.

Furthermore, following the consolidation of coal assets, Evraz management spun off Raspadskaya into a separate business in the first half of 2022, that Evraz shareholders approved 11 January 2022. As a result of the split, for each share of Evraz, shareholders will receive 0.4255 shares of Raspadskaya. Since Evraz shares are listed on the London Stock Exchange, it is necessary to wait for regulatory approval of the transaction from the UK.

The split deal seems to be beneficial for both companies.. Evraz will get rid of coal assets, which reduced its investment attractiveness as part of today's popular environmental agenda, and Raspadskaya will receive its own independent development strategy and increase the share of shares in free float, which will have a positive impact on the issuer's liquidity on the stock exchange.

Amazon has increased the number of ad slots in search results

Raspadskaya's production report for 2021 became the first annual report, which takes into account the results of the holding after the merger with Yuzhkuzbassugol. The more interesting it will be to consider the main operational data, to understand, How has the scale of the business changed since the merger?. 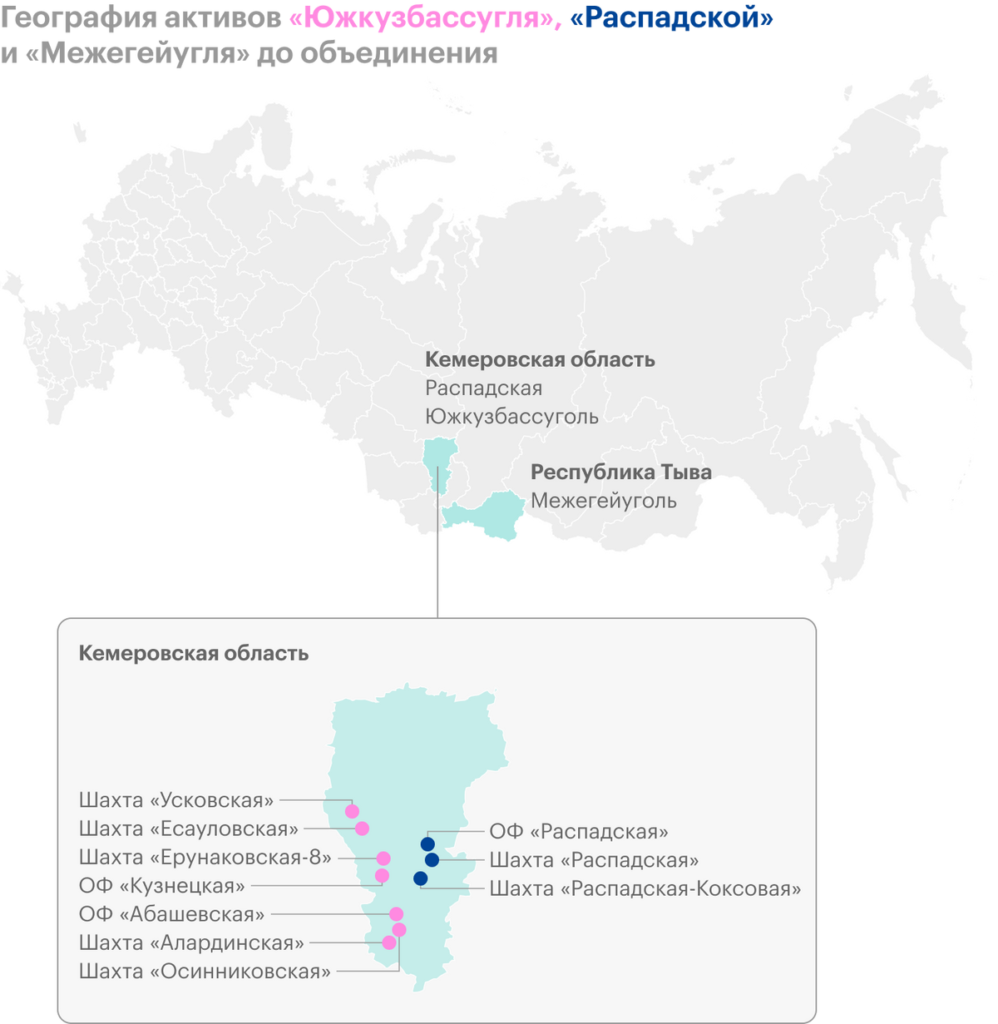 What's up with the loot

The volume of coal production in 2021, taking into account the production of Yuzhkuzbassugol, increased by 13% up to 23.3 million tons. This is partly due to the 2020 low base effect., when production at Raspadskaya's operations fell to a multi-year low amid a temporary shutdown of production at the coal mine from May to September 2020 due to unfavorable market conditions, as well as a decrease in production at the Raspadskaya mine due to an accident.

In the second half of 2020, demand and prices for coking coal began to rise on the back of an economic recovery and strong demand from the steel sector, which made it possible to restore work at the Raspadsky open pit. Besides, after the merger, Raspadskaya carried out measures to improve production efficiency at the enterprises of Yuzhkuzbassugol, due to which it increased the production of mines "Yerunakovskaya-VIII", Uskovskaya and Raspadskaya-Koksovaya in 2021.

I want to note, How much bigger did Raspadskaya's business become after the asset consolidation?. If before that, in 2017-2020, the company produced on average about 11.5 million tons, then at the end of 2021, the indicator almost doubled and amounted to 23.3 million tons. But the production results of the combined company have not yet reached the pre-crisis results of 2018-2019, taking into account the production volumes of Raspadskaya and Yuzhkuzbassugol.

Dynamics of Raspadskaya coal production before and after consolidation, million tons

To remove the effect of asset consolidation from the report, Raspadskaya management recalculated operating figures for 2020, taking into account the results of Yuzhkuzbassugol, as if the merger of coal assets took place a year earlier. I will rely on these data when comparing the dynamics of natural sales over the past year..

Raspadskaya sells a smaller part of the mined coal, and the main volumes go to processing enterprises for the production of coal concentrate.

Sales volumes of hard coal decreased by 42% up to 2.9 Mt due to high 2020 base, when Yuzhkuzbassugol sold record volumes of coal, including stocks due to the deteriorating economic situation amid the pandemic.

On the question of the insolvency of premises, which many do subconsciously :)

The crisis for the coal industry ended faster, than expected. Already in 2021, the company experienced a shortage of free volumes of coal after the sale of reserves, and all this against the backdrop of a sharp increase in prices for coal products, which reached a local peak in September-October last year. Therefore, the business reduced sales in favor of processing and replenishment of reserves..

As a result, sales of coal concentrate rose to a record 14.1 million tons, Really, growth by 2020 was only 1%. The need to replenish warehouse stocks and logistical difficulties affected.

Thanks to exports, the company gained profit in concentrate sales. Sales volumes abroad for the year increased by 5% up to 7.3 million tons, while in Russia sales fell by 3% up to 6.8 million tons.

The weighted average sales prices of coal concentrate in 2021 increased by 2 times and made 8958 R per ton of products. It means, that we are waiting for record financial performance in 2021.

After the merger and spin-off of Evraz's coal assets, the Russian coal market became the leader in terms of coking coal production. Furthermore, the company has one of the lowest production costs in the world, which has a positive effect on the profitability of the business and allows you to stably pass the crisis periods of lower prices and demand for coal products.

However, do not forget, that in 2021 the company did not reach pre-crisis indicators in terms of coal production, and its sales last year were directly affected by the shortage of free volumes of coal. It can be stated, that selling stocks at low prices during the most acute phase of the crisis turned out to be a strategically wrong decision.

Besides, demand for coking coal and coal concentrate directly depends on the situation in the ferrous metallurgy market, which is still extremely unstable, including, due to China's problems in the real estate market and the energy crisis.

​​ $SPCE Why Virgin Galactic Shares Fall Again? Will Virgin Galactic conduct space flight tests next month or not? Space tourism company Virgin Galactic plummets for second straight session on Thursday, closing on 3,8% Fall, and a fraction of a percent lower on wednesday.   Corporate events in the US market. How do they affect stocks??

Teladoc (NYSE: TDOC) - American site, on which clients are provided with services in the field of telemedicine. The company shows a good level of improvement, but the limitations of the format do not allow this sector to be considered truly promising.. And this is not good news for the owners of the company's shares..   Bundle of investment news: Uber, Crown Castle, Microsoft and ESG