What western issuers can expect from the events around Russia. Google spares no money on cybersecurity.

The effect of sanctions against the Russian Federation for foreign issuers

Probably, you have already familiarized yourself with the ever-growing list of companies, who have curtailed or are preparing to curtail operations in Russia. We decided for your convenience to disassemble 10 U.S.-traded companies in the S index&P 500, or rather, their share of sales in Russia and Ukraine.

Tobacco company Philip Morris (NYSE: PM) — 8% proceeds, out of which 6% — Russia and 2% — Ukraine. The company has not yet left the Russian Federation, but put on pause new investments in the Russian Federation and decided to reduce production. Considering, that the "smoking" market in the world is going through hard times, instability in the existing areas of work for the company is a definite minus.

Beverage manufacturer PepsiCo (NASDAQ: PEP) — 4,4%. The company also reduces production in the Russian Federation, as well as sales of some beverages. For a quarter or two, the damage to PepsiCo's reporting may be noticeable, but in the long run I don't think, that the loss of the Russian market will be irreparable for the company: it will be able to compensate by raising the prices of its products in other regions..

Flooring manufacturer Mohawk Industries (NYSE: MHK) — 4,3%. The company has so far maintained a mysterious silence on this topic.. It seems to me, given the high demand for real estate as an investment of money against the background of the recession in Russia, it may even ramp up sales., unless its management decides otherwise.

McDonald's eatery chain (NYSE: MCD) — 4,2%. The company suspended all operations in Russia, but did not close its restaurants, did not dismiss employees and continues to pay their salaries. Not being a big optimist, Notice, that these actions are in keeping with the spirit of the pandemic-era methodologies.: suspension of operations with the preservation of staff salaries.

IT company EPAM Systems (NYSE: EPAM) — 4%. The company will stop working with customers from the Russian Federation and, among other things, will continue to support its 14 thousand Ukrainian workers. So I would expect serious damage to the company's reporting – largely due to logistical and other problems., arising from the fact, that many of its employees are located on the territory of Ukraine.

SPY opens the week with a gap up

Carnival Cruise Company (NYSE: CCL) — 3,6%. The company's liners will stop visiting Russian ports, and a great question, how much this will affect its sales. The need for Russian or Ukrainian tourists to visit the Baltic and Korean ports – and the ensuing costs, - Of course, can avert some customers. But, it seems to me, amid an endless pandemic, that's not the biggest problem., facing the company.

Clothing company Phillips-Van Heusen (NYSE: PVH) — 3,6%. It temporarily suspends all operations in Russia and Belarus. This, certainly, not the biggest market for the company, but, Considering, that over the past three years, its reporting has shown results ranging from "bad" to "not so bad", this solution will definitely not add to her advantages..

Westinghouse Industrial Business (NYSE: WAB) — 3,5%. The company hasn't said anything about it and, probably, won't tell, if she is not forced. But if the United States imposes sanctions against Rosatom, then the situation may receive an unfavorable development for Westinghouse in the event of, if the Russian Federation takes retaliatory measures.

Manufacturer of sweets Mondelez (NASDAQ: MDLZ) — 3,5%. The company suspends part of the operations, but does not cease to sell its products. I see the main problem with the shutdown of Ukrainian factories by the company.. Due to known circumstances, it may turn out so, that the company will have to write off their value, and this will lead to noticeable one-time losses.

Deer (NYSE: FROM) — 2,9%. The company will stop supplying its equipment to Russia and Belarus. It seems to me, the company on the entire list is best adapted to what is happening, and not only because of the small share of sales in Russia.

Rising prices for agricultural products in the world even before all the events have made investments in the renewal of fixed assets for farmers around the world more profitable than usual. And given the rise in prices due to current events and then, that Russia and Ukraine are the most important agricultural exporters, i would expect, that deer compensates for the lack of the Russian market at the expense of other countries, and primarily the United States.

However, the troubles of American issuers are simply nothing compared to the problems of European issuers: there will be problems with exports, and with the sharply increased cost of raw materials, And, finally, with logistics. Now it is difficult to assess the damage, but shares of European companies with a large share of business in Russia are already falling. And we will be able to see the full picture only in the next reporting season.. 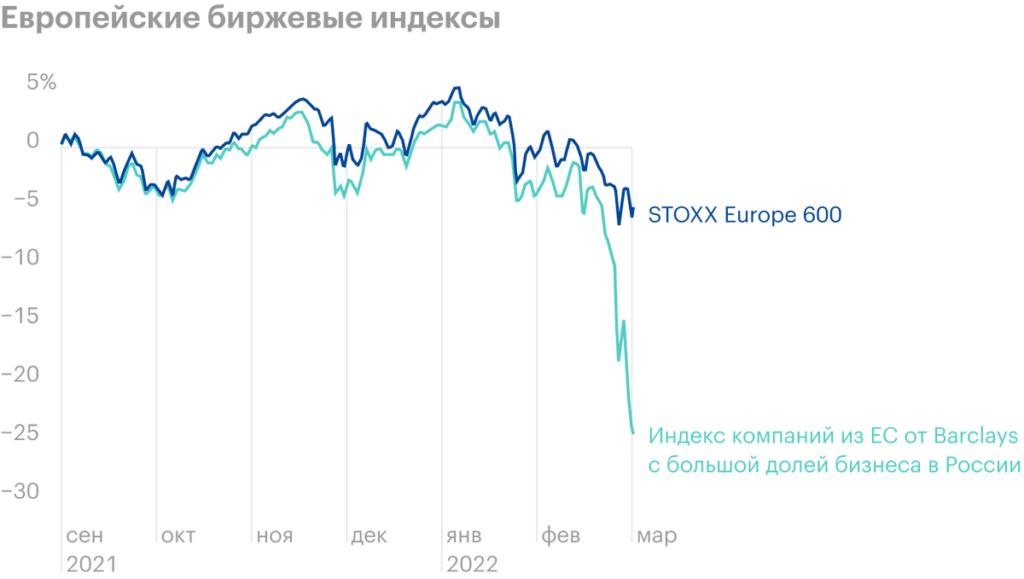 conclusions. For the most part, American companies have not suffered much from the events taking place now.: of the big companies, none else 10% revenue does not fall on Russia or Ukraine. Another thing, that there could be indirect damage like Boeing's refusal to buy Russian titanium or the discussed tariffs on Russian goods. But we will be able to fully assess the impact of these initiatives only for at least the next few quarters..

But European issuers can be badly shaken by current events - and this must be taken into account by investors..

Current situation, probably, will be used by many companies to justify business margin problems. In fact, it will be possible to write off a lot of unrelated problems to known events.. Even before all the news about the sanctions, many American companies issued negative profit forecasts due to strong cost increases., as investors have become much more sensitive to the news, that the issuer's statements do not meet profit expectations.

Therefore, many issuers, maybe, will refer to Ukrainian events to the maximum, even if the direct damage to their business is small: force majeure of such force will not be perceived by investors as an indicator of long-term problems directly in the business.. Therefore, in the event of a report worse than expectations, the shares may not fall so much., if the issuer will point to events in Europe as the main source of costs.

That's just my hypothesis., but I would still expect such a development..

And that every cent is worked out: Google expands in the field of cybersecurity

The purchase of Mandiant will cost Google 5.4 billion. Mandiant take on price 23 $ per share — with a premium of approximately 18,5% to the stock price before this news appears, and 54% to the company's share price in February, when the first reports appeared about the, that they can buy.

According to the annual report of Mandiant itself, her business looks something like this:

Mandiant is unprofitable: her final margin is about minus 50% from proceeds. P / S company when buying about 10. Buy Mandiant for about the same price, which was asked for shares in December 2020. 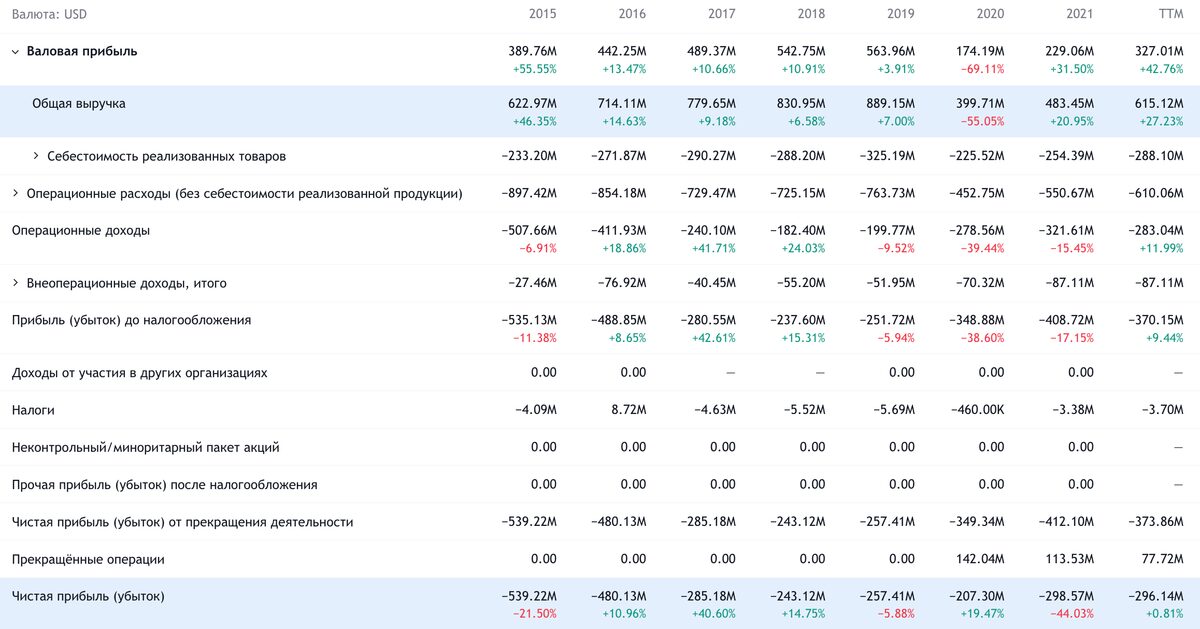 Mandiant is known in no small part for its investigations into hacker attacks.. For example, about the disaster solarWinds the world told Mandiant. It also helps the US government to monitor the tricks of hackers from other countries..

Google's purchase of the company is seen as an opportunity to gain a competitive advantage for its cloud business, which the company is actively developing, hoping to catch up and overtake more successful competitors from Amazon and Microsoft.

As a Mandiant Business, in my opinion, not so much: the company is expensive, it is unprofitable and cannot guarantee the new owners a stable cash flow, after all, the company's renewable sources of revenue are about 40% of total revenue.

It cannot be said, that "after buying Google, something will cut, something optimizes and at the output will receive a margin, working business». But Google doesn't count the money.: the search engine has many, many of them. AND, basically, this is good: as I wrote on a similar occasion in the case of the purchase of Splunk by Cisco, "looks like, it makes sense to pick up the fallen shares of unprofitable startups of varying degrees of inadequacy and high cost in the hope or expectation of, that the issuer will be bought by a larger and more serious company".

Also here comes true our forecast of the growth of spending on startups by large technology companies, caused by the increased attention of regulators to their monopolistic practices in the core business: "So far, they have a lot of money., i would expect, that they will buy startups of varying degrees of unprofitability, to be ready for the future, where their core 'advertising-social' business will be killed or seriously crippled". Which again brings us back to the idea of the prospects of investing in fallen startup stocks..

Teladoc (NYSE: TDOC) - American site, on which clients are provided with services in the field of telemedicine. The company shows a good level of improvement, but the limitations of the format do not allow this sector to be considered truly promising.. And this is not good news for the owners of the company's shares..   Prom from IT