Some in the West refuse to buy Russian oil - but prices only grow from this. And Hapag-Lloyd expands business in Africa.

Prospects for the Russian oil and gas sector

USA and other countries, members of the International Energy Agency (IEA), agreed to print 60 million barrels of strategic oil reserves, which is approximately 4% reserves of IEA member countries, to compensate the market for interruptions in supplies from the Russian Federation. But it didn't affect prices.: talk of a possible ban on Russian oil supplies makes investors very nervous. So the barrel is now worth more 100 $, it's almost half the price, than a year ago.

Some are pinning their hopes on US shale companies: that they will be able to quickly increase production and ensure a sufficient flow of supply to the market, which will help balance the lack of Russian oil. Let's figure it out, How justified are these expectations?.

Director of the largest shale oil company Pioneer Natural Resources Scott Sheffield believes, that in the event of a ban on Russian oil, the price per barrel could be in the range of 150-200 $. At the same time, the American shale industry may not increase production by 1.5 million barrels per day immediately., and during 18 months and only if, if the Biden administration goes to soften environmental standards, which is far from true.

For understanding: Russia exports 7.8 million barrels per day and about half of this oil goes to Europe. If the world tightens up and ramps up US shale production, will continue to print strategic oil reserves, will force the OPEC countries to increase production and, finally, lift the ban on buying Iranian oil, this could, in theory, replace 3-4 million barrels per day, but this is only half of Russian exports.

Although the collective West has not yet begun to impose serious sanctions against the Russian commodity sector, even record oil prices do not guarantee sales. The fact, that the participants in the commodity trading market are trading houses, banks and their numerous intermediary counterparties are boycotting Russian oil en masse. This leads to the fact, that it is sold at a significant discount - about 18 $ cheaper per barrel, than American. And this despite rising oil prices..

In particular, ship, which usually take Russian oil from the northern ports of the Russian Federation, cannot insure their flight or cargo, and therefore the costs of transporting Russian oil are now very high. Although, as we figured out above, it will be difficult for the world to completely get rid of Russian oil. 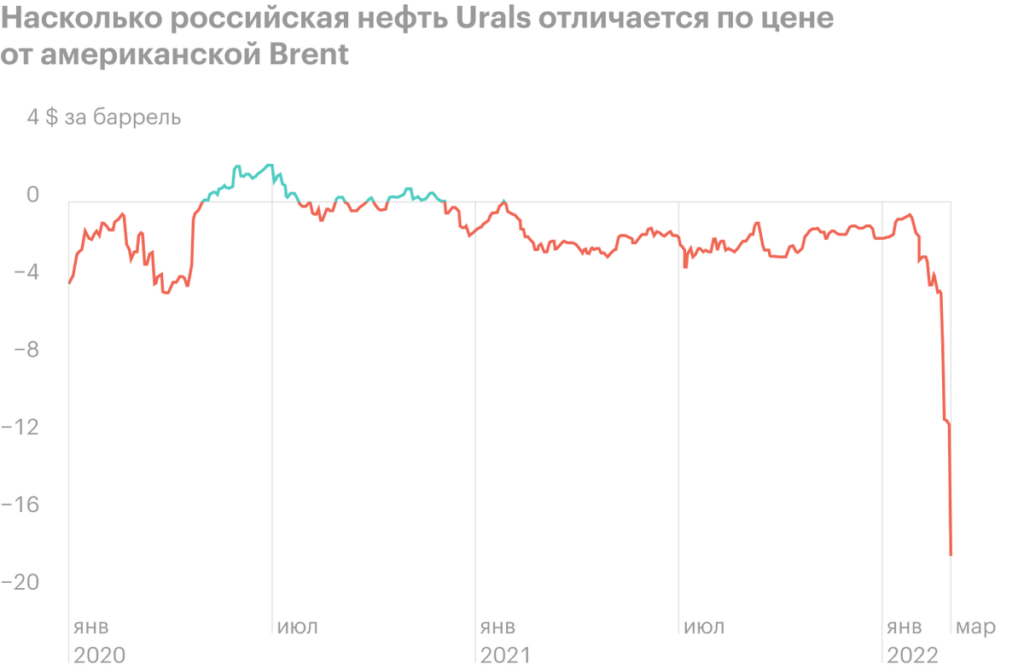 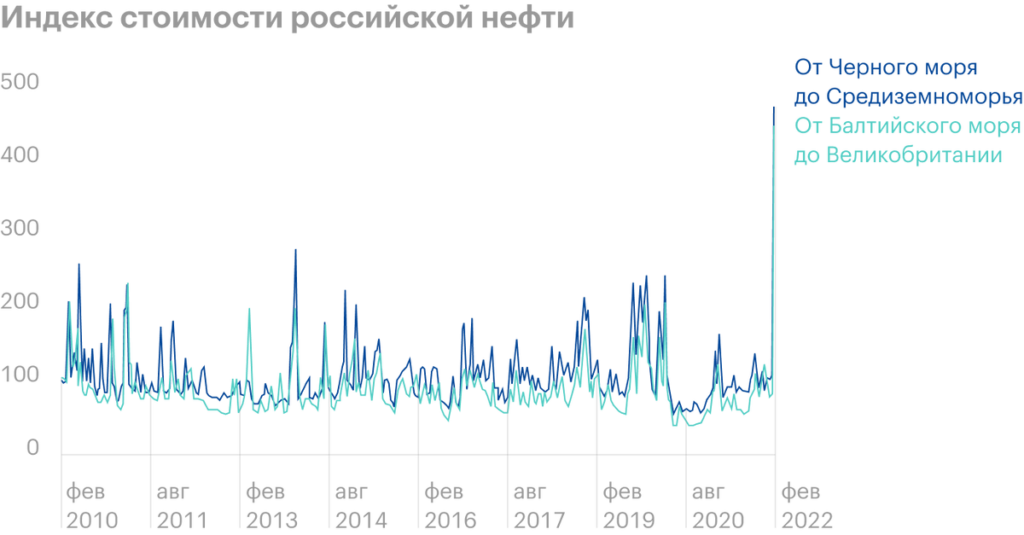 But "there's a method in madness". Simultaneously with talks about banning or restricting Russian energy exports to the EU, discussions are underway on the transition of the EU to clean energy. In the context of the Ukrainian events, the EU is thinking of speeding up the “greening” of the energy sector and reducing gas consumption by 2030 by 23%, and by the end of this year, with great effort, Europe will be able to replace 112 out of 155 billion cubic meters of Russian gas at the expense of all possible energy sources.

I doubt it, that the plan will work out for everything 100% this year: this will mean even higher prices and extreme consumer inconvenience. But the EU's strategic line of thought is clear.

Main question, which should worry the directors of Russian oil and gas companies and their shareholders, sounds like this: how far the US and the EU are willing to go in the blockade of the Russian Federation? Understandably, that a complete blockade would cause a huge increase in oil prices and serious inconvenience for consumers.

But, as the experience of the last two years shows, and USA, and EC, basically, taught their population to live in conditions of constant tension and a state of emergency. Quite possible, that they can take emergency measures to reduce the consumption of the population, in order to ensure the almost 100% disappearance of Russian oil from the market, — the actively implemented discourse about “responsible consumption” will play into the hands here.

I would not overestimate electoral risks: tough anti-coronavirus measures and economic turmoil in none of the major economies of the West have not led to regime change in these two years, although protests against restrictive measures were very large-scale there. The same Macron in France is still in power even with 37% approval rating.

By the way,, now there are about 2 million refugees from Ukraine in Europe, almost all who entered there without testing and vaccination certificates, - so I would not rule out the possibility of a new large-scale epidemic in Europe, which will lead to a halt in business activity and a reduction in the consumption of Russian energy resources, so to speak, naturally.

Uptick rule in the US stock market

Two conclusions can be drawn from this story., That, at first sight, contradict each other, but they really complement each other..

Attractive price. Russian oil and gas companies with a large share of exports are an extremely attractive target for short-term investment: they are outrageously cheap, high energy prices cannot be reduced naturally, and the state of the Russian Federation acts as a large or dominant shareholder in many of them - and therefore is interested in receiving dividends. Also a reason for optimism can be considered the upcoming investments of the state of the Russian Federation in these companies.. But from a long-term point of view, everything is not so good.

Firstly, long haul and EU, and the US will surely be able to stifle the export of the Russian oil and gas industry. This can be done in a year only with a huge overstrain of forces., but for 10 years is quite real.

Secondly, there is a problem of technological backwardness of the Russian oil and gas industry in the context of international isolation. Everyone has heard about the withdrawal from the Russian Federation of large Western oil and gas companies such as Shell and BP. The remaining French Total does not stop working on existing projects yet, but plans to stop investment in new fields. And that's bad.

It's not even about investments - because, as General Talalaev said in the film "DMB", "money - splashes!». The main role of Western corporations and partners in Russia is to provide technology, knowledge and experience, needed for production at promising fields, where it is very difficult to extract oil and gas.

Russia is slow, but the share of hard-to-recover reserves in the overall production structure is steadily growing. And if the Russian oil and gas sector is subjected to a prolonged blockade, that is, the risk of falling operational performance due to the unavailability of the technologies needed for this.

Clean energy. High Energy Prices and the Logic of Western Governments, steadily driving up prices, give impetus to the development of clean energy in developed countries. So,, you can look at the shares of the relevant companies. Moreover, the transition to renewable energy sources now has additional political meaning for consumers and governments in Western countries..

German container carrier Hapag-Lloyd (FROM: HLAG) buys African-German container shipping company Deutsche Afrika-Linien (FROM THE). Amount unknown, but I don't think, that HLAG will have big problems: according to the latest report, at its disposal over 7.7 billion euros. Dal will add not much either: the company had one container ship with a capacity of 6,589 thousand twenty-foot equivalents.

Investidea: Ciena, because the information age

For comparison: HLAG has transport capacity in excess of 11.872 million TEUs. But still HLAG management thinks in the right direction.

Trade turnover in the countries of the "global South" will grow, and HLAG is already trying to take a place in this market - current and potential shareholders of the company should take note.

Teladoc (NYSE: TDOC) - American site, on which clients are provided with services in the field of telemedicine. The company shows a good level of improvement, but the limitations of the format do not allow this sector to be considered truly promising.. And this is not good news for the owners of the company's shares..   Who will win the stock market robot war??

постепенно пора привыкать к вот таким вот чудесным сырьевым графикам.а что будет, if oil does -40%?the beauty is, what +40%, it's almost nothing, but in the negative, это очень и очень.