11 July aerospace company Virgin Galactic (NYSE: SPCE) successfully completed the next tests. Test flight was the first, when in the cockpit of the ship, apart from 2 pilots, there were passengers. The flight record can be viewed on the company's Internet office..

Branson, either back and forth

On Sunday, the carrier aircraft VMS Eve took off from one of the runways of the Space Center America in New Mexico and climbed to an altitude of 12 km. There the plane released the VSS Unity manned spacecraft with passengers on board.. Unity launched its own rocket engine, accelerated to a speed of 3000 km / h and reached an altitude of 86 km. After the ship landed smoothly at Space Center America.

One of 4 passengers became the founder of Virgin Galactic Richard Branson. This is what he said: “I dreamed about this moment since my youth. We are at the forefront of a new space age. For me, as the founder of Virgin, it is a great honor to receive this customer experience as part of a team of professionals. I can't wait to share this experience with aspiring astronauts around the world. ".

“Our mission is to make space easily accessible to everyone. I am pleased to announce a partnership with Omaze and Space for Humanity, to inspire the next generation of dreamers. We looked at yesterday's space pioneers for a long time and with amazement. Now I wish, so that tomorrow's astronauts look ahead and make their dreams come true ", - also said Branson.

Omaze - a platform for raising funds for charity. Anyone who wishes can donate funds and win awards: dinner with a star, movie premiere tickets, car, travel and other. Now Omaze has a new prize: two tickets to space. The program includes: hotel accommodation, excursion trip to the space center, preparation and the flight itself.

Space for Humanity is an American non-profit organization. The main mission of the organization is “to change the world, changing the point of view of ordinary people ". Space for Humanity wants to make space travel accessible to everyone, therefore, he chooses people of different origins and different nationalities as astronauts.

Faster, but not higher and not stronger

Initially, Richard Branson did not plan to go into space in the first, and on the second flight with the participation of passengers. Later, the founder of the company changed his mind and decided to fly earlier.: so Branson beat Jeff Bezos, founder Amazon and another space company - Blue Origin.

Bezos did not like this alignment.. 9 july, two days before the flight, Blue Origin Tweets Infographic, where she compared her New Shepard to Virgin Galactic's Unity. The company told, that Unity has a stronger impact on the environment, has smaller windows and is not equipped with an evacuation system. 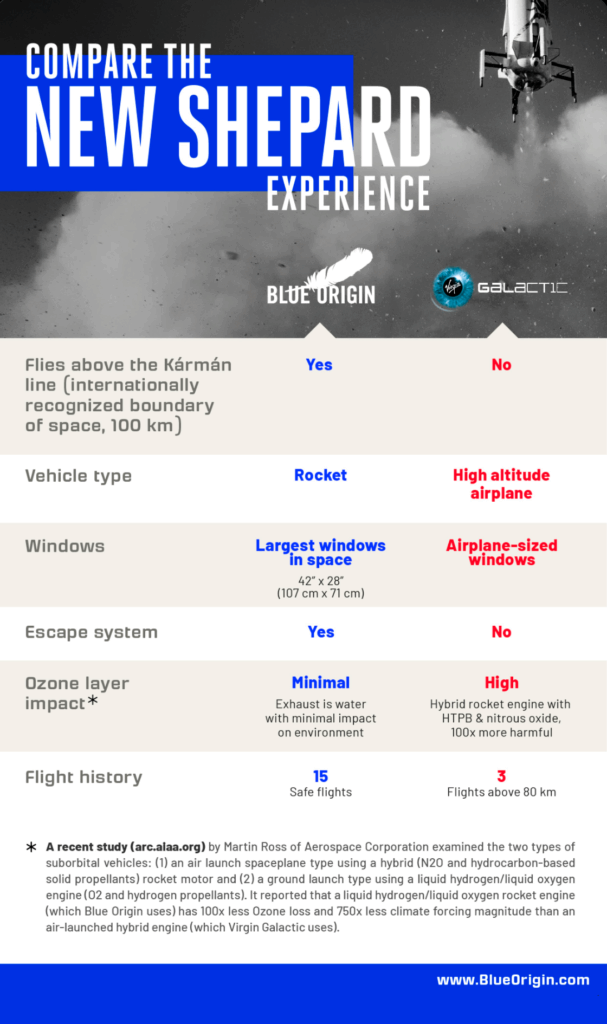 Blue Origin considers flight altitude its main advantage. All Virgin Galactic tests were below 100 km, that is, below the Karman line, which is considered to be the boundary between the Earth's atmosphere and space. According to Blue Origin, Virgin hasn't been in space at all: "Only 4% people in the world recognize, that space begins at an altitude of 80 km ".

Blue Origin's first passenger flight is scheduled for 20 july. Bezos and his brother can become one of the four passengers.

At the beginning of the month, the St. Petersburg Stock Exchange reported, that Virgin Galactic shares became the most popular among Russian investors. Virgin had 24,3% of the total trading volume in June. The second and third places were taken by Tesla and TAL Education - 5,3 and 3,6%.

During the year, Virgin Galactic often delayed the next test date.. Due to the transfers, the company's shares at some point fell by 77%, from 63 $ in February to 14 $ in May. Later, after various positive news, Virgin securities rose to 49 $. Excluding trading on the premarket, the company's shares added 112% year to date. Virgin Galactic earns nothing yet, but the company promises to launch commercial space flights in 2022.

Created a new LJ community for people associated with the New York Stock Exchange to share their trading experience on it, ideas and news. Anyone can write their material in it, ask…