Walgreens Boots Alliance (NASDAQ: WBA) is the world's largest network of pharmacies, which was formed at the end of 2014 through the merger of two firms: Walgreens и Alliance Boots. The company not only works offline, but also actively develops the online direction.

In early January, Walgreens Boots Alliance presented a report for the first quarter of 2022.. It's not about the calendar year., and about the financial, which the pharmacy retailer historically begins in October. Main quarterly results of the current period:

Let's take a closer look at the company's results.

Segments of the company from the last walgreens Boots Alliance review have only slightly transformed after the deal with the leading wholesale supplier of pharmaceutical products AmerisourceBergen, under which the WBA sold most of its businesses to Alliance Healthcare, mainly engaged in wholesale trade of pharmaceutical goods. The deal amounted to 6.5 billion dollars.

The pharmacy chain divides its business into three segments.

Activities in the USA. The segment generates the most revenue and consists of operations in the local US market.

International direction. It includes subsidiaries from the UK, Germany, Chile, Mexico, Ireland, Thailand and other countries, as well as unsold assets of the Pharmaceutical Wholesale segment, the financial results of which after the transaction with AmerisourceBergen have decreased significantly.

Corsair Gaming: how the company's business works, is it worth investing in stocks

Moving on to the results of the first quarter, it is worth noting, that the largest contribution to the growth of financial indicators was made by the international segment, year-on-year sales increased by 36% from $4.285 billion to $5.818 billion against 7,8% in general, walgreens Boots Alliance. The main drivers are the recovery of the UK market and the creation of a new joint venture in Germany. For comparison: in the main local market, sales increased by only 3% against the backdrop of last year's high base.

Net profit of Walgreens Boots Alliance in the first quarter of 2022 increased from a negative value of 0.308 to 3.580 billion dollars on the background of a one-time income of $ 2.5 billion, which was recorded in the statements after the closing of transactions with VillageMD and Shields.

The company invested its own money in two data services, and in return received their shares: the current share of the pharmacy chain in VillageMD is equal to 63%, and in Shields — 71%.

Walgreens Boots Alliance also earned $1.1 billion in operating cash flow in the first quarter of 2022., which almost coincides with last year's result, but the company reduced its free cash flow by $118 million to $645 million.. The main reason for this is the reduction in working capital., increase in capital costs, as well as a decrease in state support, related to COVID-19.

After the publication of strong financial results for the first quarter of 2022, the management of Walgreens Boots Alliance increased its own forecast for the whole of 2022. Main points:

In addition to this prediction, Walgreens Boots Alliance also announced, that through its Transformational Cost Management Program, management hopes to save an additional $3.3 billion by 2024 compared to 2018 data.. At the end of 2021, the company reached the figure of $ 2 billion.

The largest pharmacy chain is now busy restructuring its own business, because of what the company can not afford to spend significant funds on a buyback, to which many investors are accustomed. Walgreens Boots Alliance bought about 1 million of its shares over the past year, while four years earlier - from 2016 to 2020 - the company acquired about 218 million securities.

This led to the fact that, what is the dynamics of shares of a pharmacy retailer over the past 12 months were worse than the S index&P 500. 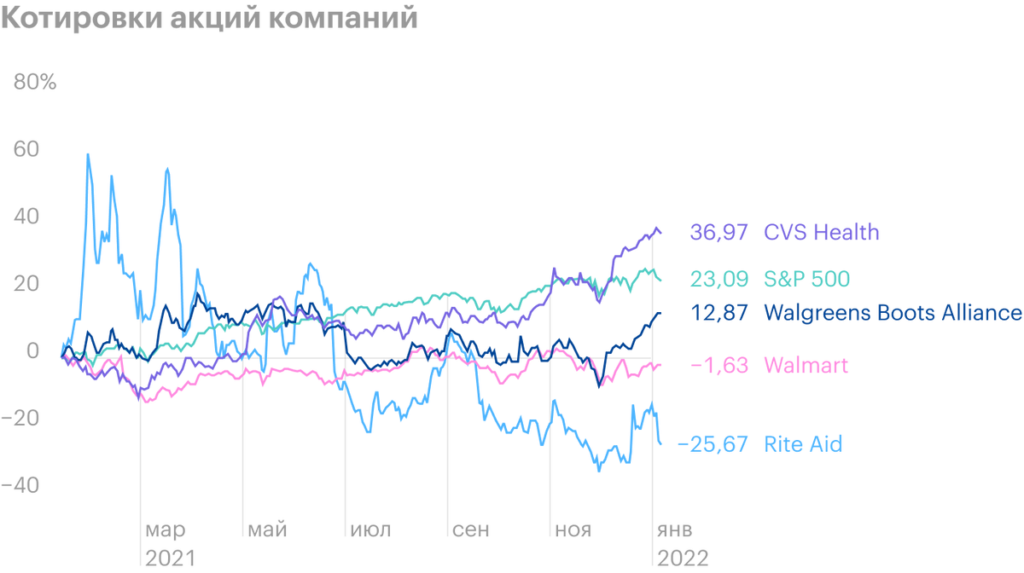 All this made a weak impression on the market - as part of the first reaction. 6 In January, shares fell by almost 3%, and already 7 In January, quotes returned to their previous positions.

The further long-term movement of shares will largely be correlated with the current transformation of the Walgreens Boots Alliance business., within the framework of which the pharmacy chain is trying to occupy the most promising segments of the digital medical market, buying large stakes in small industry companies, for example VillageMD, Shields and CareCentrix. If the retailer manages to reorganize, then, probably, its own EV score / EBITDA ~ 9 won't stay long.

​​ $SPCE Why Virgin Galactic Shares Fall Again? Will Virgin Galactic conduct space flight tests next month or not? Space tourism company Virgin Galactic plummets for second straight session on Thursday, closing on 3,8% Fall, and a fraction of a percent lower on wednesday.   Analysts have named Micron shares, Nvidia, Broadcom and Marvell are the best in the industry

Teladoc (NYSE: TDOC) - American site, on which clients are provided with services in the field of telemedicine. The company shows a good level of improvement, but the limitations of the format do not allow this sector to be considered truly promising.. And this is not good news for the owners of the company's shares..   Rezvyakov vs Gerchik