TCR2 Therapeutics (Nasdaq: TCRR) is an American biotechnology company from Massachusetts, which develops new methods of immunotherapy and appropriate drugs for patients with oncology. The business was founded in 2015 and went public in February 2019 through a Nasdaq IPO.. 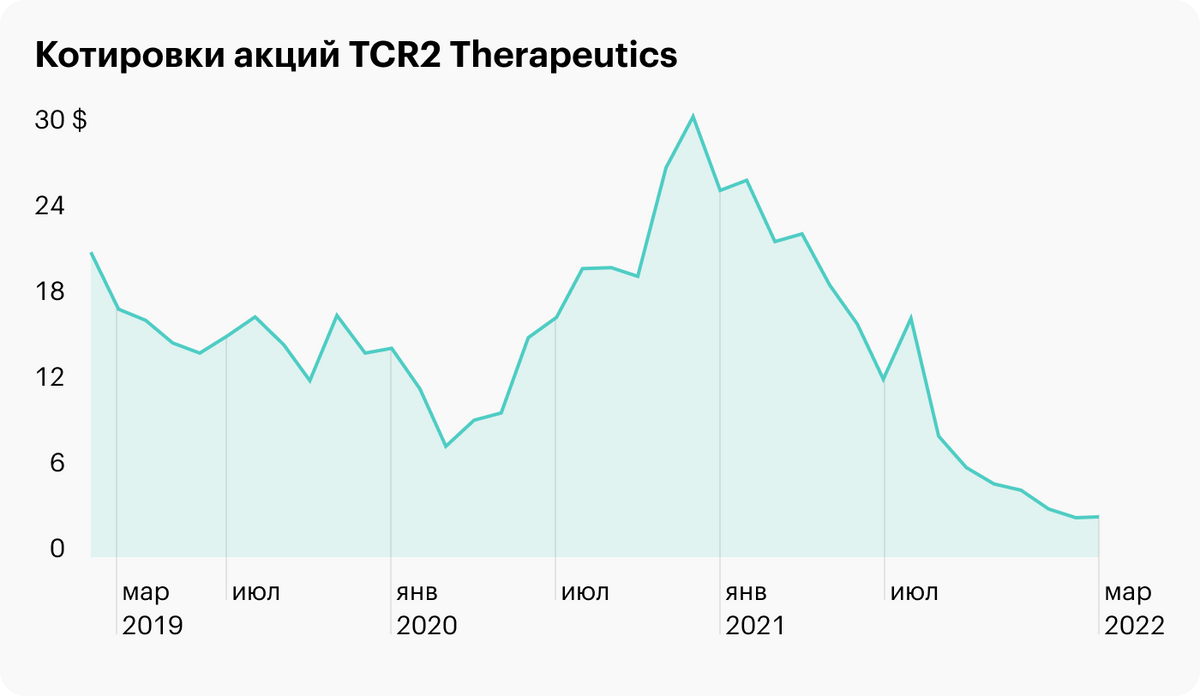 The company is engaged in the development of new drugs for different groups of people, cancer patients. Almost all TCR2 Therapeutics products except for one are in early preclinical stages of research.:

Steep stock price peak. The issuer's securities are in a deep depression and have lost more than 90% its price. Certainly, current value slightly more 2,5 $ per share may seem like an attractive point to buy and start building a position, but it will be useful to further analyze the reasons for such a rapid loss of a huge part of its capitalization by the company and once again try to critically consider the investment attractiveness of TCR2 Therapeutics.

Business will be unprofitable for a long time. The company looks "raw" even by the standards of the biotechnology sector, who habitually lives by expectations for a long time. Flagship drug Gavo-cel is only in the first of three stages of clinical trials, and its bumpy road to regulatory approval and commercialization could take a few more years.

All other developments are at the preclinical stages of research, and quite likely, that some of them may immediately show an unsatisfactory result and not go further at all - the time and resources of the company will be wasted, but it happens.

The sector is not in the best shape. Additional pressure on stocks, which are not supported by the product and attract investors only with forecasts of future development, the general situation in the biotechnology sector will also provide. Its main landmark in the form of iShares Biotechnology ETF has been falling for several months in a row and from a historical maximum to 177 $ lost over 25% prices. 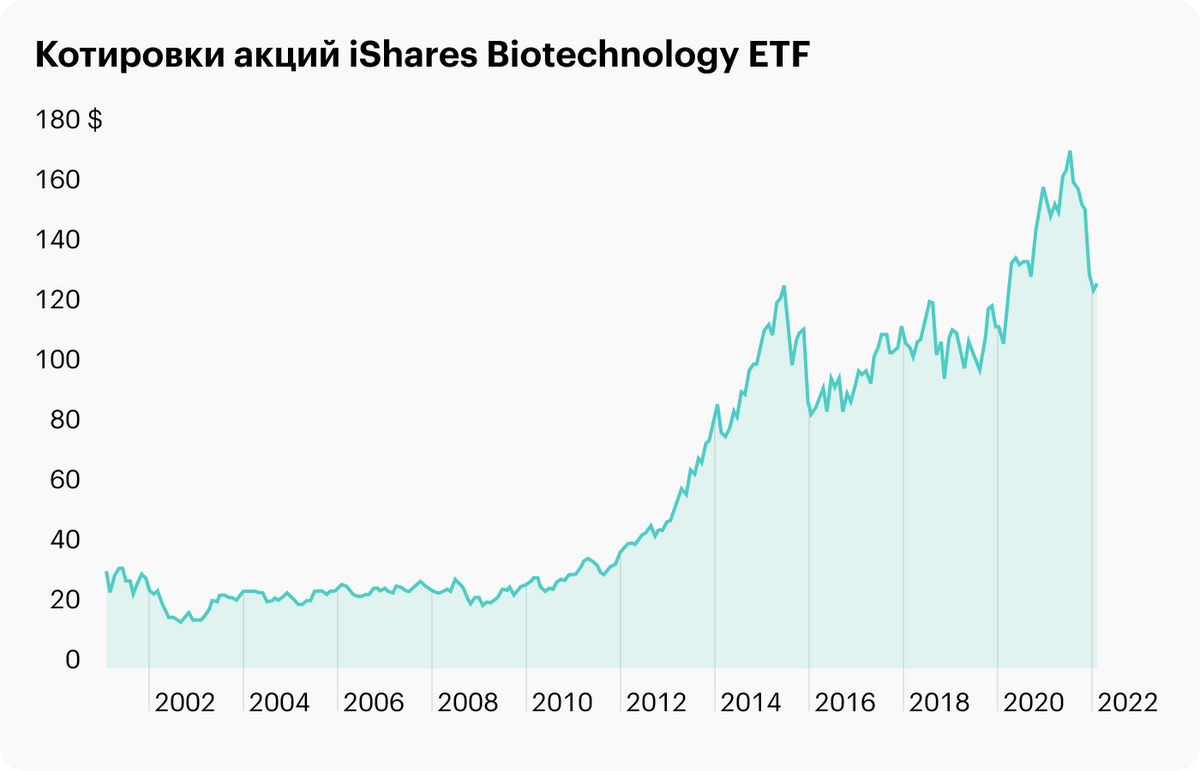 Stable financial position. With a small capitalization of $109 million, TCR2 Therapeutics is taking good care of its financial health.: the company's assets exceed its liabilities by several times, and the debt is completely absent - this indicates that, that while the business is coping with its tasks on its own.

There is still enough money. Even if the business does not start to earn anything, and free cash flow will decline annually at current rates, then, according to Simply Wall Street analysts, the company has enough money for another two years. It turns out, that even under the worst-case scenario for the development of TCR2 Therapeutics is able to stay afloat and fund its research.

Quarterly report pleased. In its fourth quarter report, the company said, that plans to expand the control group of patients for trials of Gavo-cel and plans to move to the second stage of clinical trials of the drug in the first half of 2022. News about the planned development of the flagship drug pleased investors, and stocks reacted notably against the backdrop of a prolonged decline in growth by 16%. 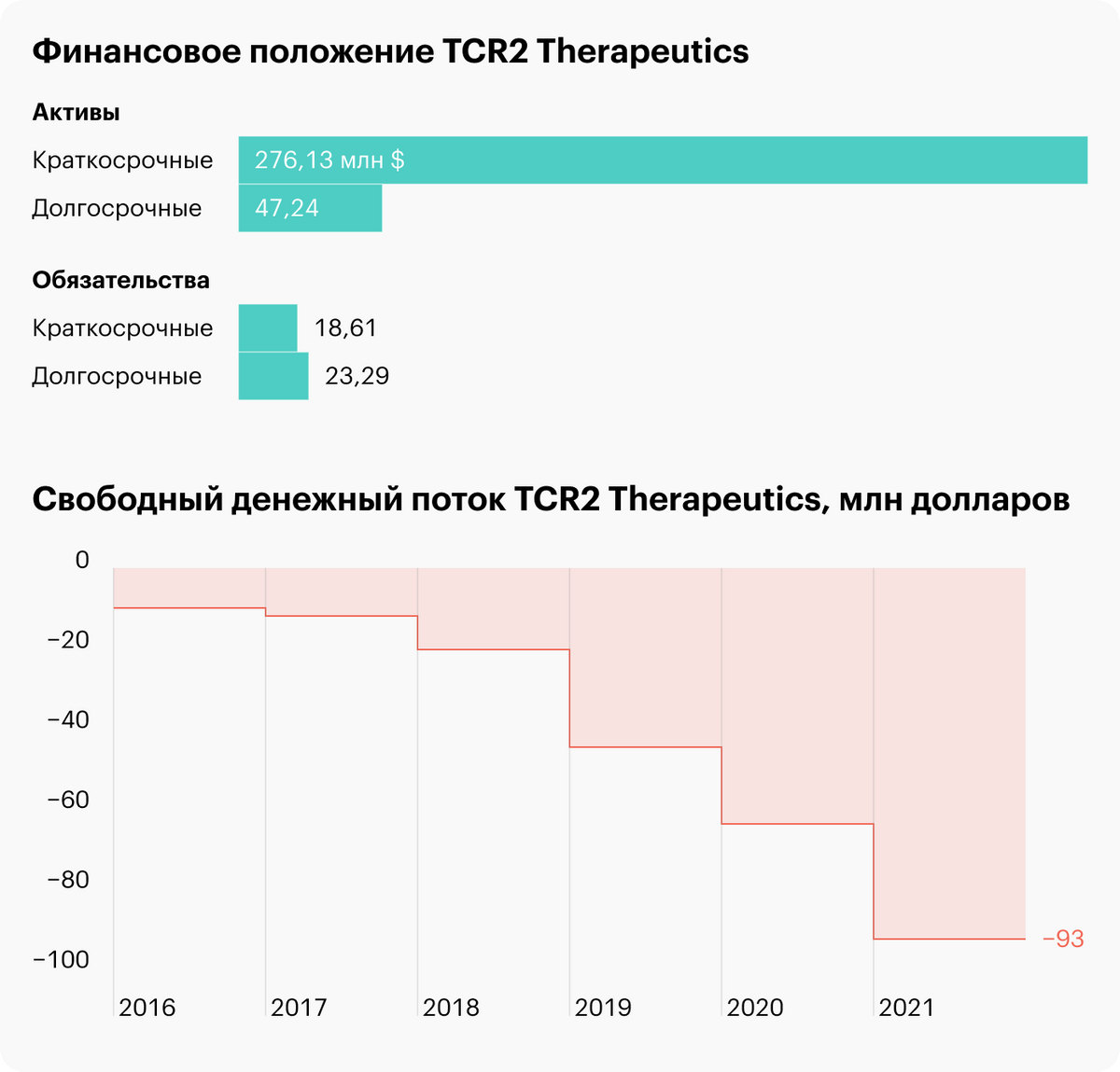 TCR2 Therapeutics joins army of pharmaceutical companies, who have set as their goal the fight against cancer and, in addition to benefiting society, plan to make money on it.

The company's shares are traded at an attractive price, it is not burdened with debts and on the horizon of several years retains the ability to pay its own bills. At the same time, it is difficult to call the issuer's securities attractive for investment.: business lost more 90% market capitalization in less than a year, almost all of its developments are in their infancy, and the market as a whole is not in the most favorable mood and has been falling for several months in a row.

Maybe, it will be interesting to follow the company for some time, to understand, How does investment in it compare with your risk tolerance and planning horizon?.

Teladoc (NYSE: TDOC) - American site, on which clients are provided with services in the field of telemedicine. The company shows a good level of improvement, but the limitations of the format do not allow this sector to be considered truly promising.. And this is not good news for the owners of the company's shares..   Cheat sheet for investors: stock

We conclude our conversation with Maxim Zakharov - an algorithmic trading professional. FirstSecond Lifestyle of an exchange lonerStrategy of cubes It would be necessary to lay strawsLess timeframe - more secretsOil futures Lifestyle of an exchange loner - You are a member of the club of algorithmic traders? - Not, i'm a loner. But we have a certain company, which used to periodically meet at Smartlab conferences, while they were.   American Outdoor Brands Review: insiders get ready for camping

We end the conversation with Maxim Zakharov, an algorithmic trading specialist. 1-2nd Lifestyle of an exchange lonerTactics from cubes It would be necessary to lay strawsLess timeframe - more secretsOil futures Exchange loner Lifestyle - You are a member of the club of algorithmic traders? - Not, i'm a loner. However, we have a certain company, which previously gathered from time to time at Smartlab conferences, while they were.   Important economic data today!