Solid Biosciences (Nasdaq: SLDB) a biotechnology company based in Cambridge, Massachusetts, which is engaged in the search for new methods of therapy for genetic diseases and the development of appropriate medicines. The business was founded in 2013 and went public in 2018 after listing shares on Nasdaq.

All resources of the company are aimed at combating Duchenne myodystrophy - a genetic disease, in which patients from childhood experience muscle weakness and a decrease in intelligence. Symptoms progress over time and on average shorten the life of patients to 25-30 years. Solid Biosciences now has three developments.:

Capitalization decreased in 10 once. After entering the stock exchange, the company's share price rose higher 50 $ for paper, but soon began to fall rapidly and at the moment has come to current values less than the dollar.. This example illustrates the downside of an IPO well., each of which is advertised by future issuers as a unique opportunity for investors, but often ends with a similar protracted fall after a brief take-off. It's hard to imagine now, when Solid Biosciences shares can return to historical price highs. 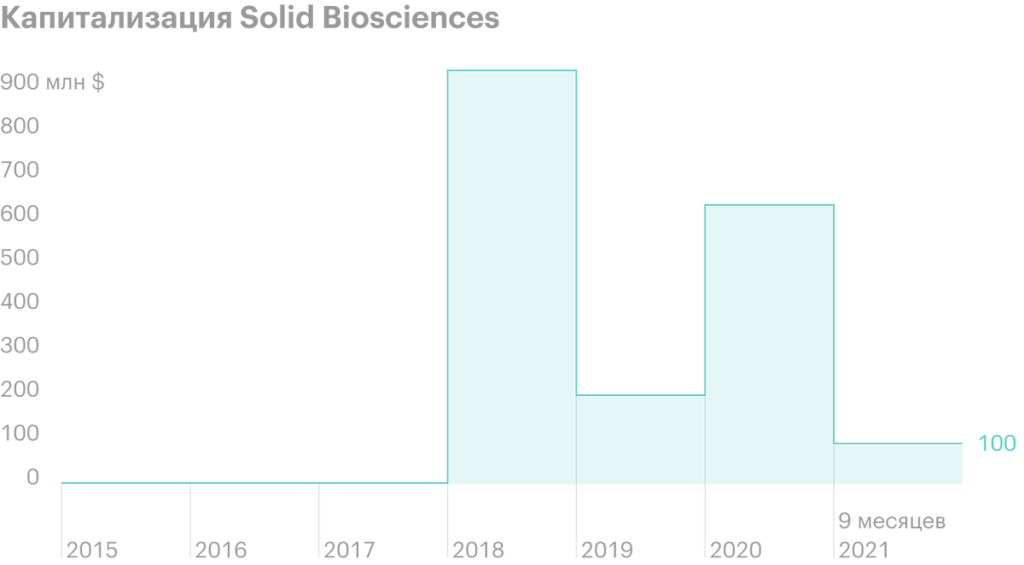 Annual additional issue. Since 2016, the company has been steadily issuing additional blocks of shares - so far this is the only and most convenient way for business to raise funds.. This approach saves management from increasing debts and loans., but does not have the best effect on their relations with investors, whose share is systematically depreciating year after year. Initial 19 million shares in 2015 turned into 110 million in 2021 — the number of securities of the issuer increased almost in 6 once.

Soon to be profitable. The usual situation for biotechnology companies with chronic unprofitability in this case is complicated by tiny capitalization and systemic injection of new shares into the market - already now such methods of raising funds are exhausting themselves., and it is unlikely that Solid Biosciences will be able to rely on such a strategy for the next 5-6 years.. Therefore, the obvious lack of profitability on the horizon of 2-3 years creates additional pressure on the business..

20 companies, who spent billions on buyback and boosting their stocks

Stocks are cheap. Now SLDB securities cost less than a dollar apiece and are a convenient tool not only for speculative transactions., but also for a systematic and long set of positions. If a person has made a firm decision to invest in the company, then he will be able to competently plan his investments over a long distance, even with relatively modest capital..

The patient is financially healthy. The company does not have for the latter 5 years there were no debts, its short-term and long-term assets significantly exceed liabilities, and cash flows are stable - according to Simply Wall Street, at the current level of expenses, they should be enough for another 2.5-3 years., even if the company does not receive a single extra cent during this time.

Can buy. A company of such a small capitalization with specific developments and a vector of development can become attractive for the acquisition of large players in the biotechnological market., who always try not to miss a convenient chance to scale. Given the fundamental undervaluation and the P multiplier / BV, equal 0,45, even without development, the entire property of Solid Biosciences is worth twice its market capitalization., and investors at current quotes for each dollar invested in shares receive two dollars in the form of tangible assets of the business.

Solid Biosciences – Classic Penny Stock, or "penny share", which may be attractively priced, but at the same time carries high risks of volatility and manipulation of interested market participants. The company itself, with its current capitalization, may become an attractive target for purchase by larger players in the pharmaceutical sector., but such assumptions can hardly be the only and decisive argument in favor of investing in the issuer's shares..

​​ $SPCE Why Virgin Galactic Shares Fall Again? Will Virgin Galactic conduct space flight tests next month or not? Space tourism company Virgin Galactic plummets for second straight session on Thursday, closing on 3,8% Fall, and a fraction of a percent lower on wednesday.   Games on the Russian market.

Teladoc (NYSE: TDOC) - American site, on which clients are provided with services in the field of telemedicine. The company shows a good level of improvement, but the limitations of the format do not allow this sector to be considered truly promising.. And this is not good news for the owners of the company's shares..   ЖЖ

We conclude our conversation with Maxim Zakharov - an algorithmic trading professional. FirstSecond Lifestyle of an exchange lonerStrategy of cubes It would be necessary to lay strawsLess timeframe - more secretsOil futures Lifestyle of an exchange loner - You are a member of the club of algorithmic traders? - Not, i'm a loner. But we have a certain company, which used to periodically meet at Smartlab conferences, while they were.   The wolf of Wall Street 2013

We end the conversation with Maxim Zakharov, an algorithmic trading specialist. 1-2nd Lifestyle of an exchange lonerTactics from cubes It would be necessary to lay strawsLess timeframe - more secretsOil futures Exchange loner Lifestyle - You are a member of the club of algorithmic traders? - Not, i'm a loner. However, we have a certain company, which previously gathered from time to time at Smartlab conferences, while they were.   Forex or stocks?