Riot Blockchain (NASDAQ: RIOT) - formerly known as Bioptix technology company from the United States, which is engaged in bitcoin mining on an industrial scale. At the end of November 2021, the company announced the ownership of 4464 BTC and an arsenal of 29095 devices for cryptocurrency mining.

The company independently produces and accumulates bitcoins. There are two manufacturing complexes located in the states of Texas and New York, whose total energy consumption is 91 megawatt.

All this is necessary for, to ensure the stable operation of the huge "fleet" of 30 thousand ASIC miners, or special purpose integrated circuits, who perform computational operations to obtain bitcoin with maximum efficiency. In a simplified form, you can imagine them as a specific computer, who can only solve one problem, but most efficient.

At the moment, Riot Blockchain has developed computing power, or hashrate, 3 exahash per second - this made it possible to extract 466 bitcoin, which is equivalent to approximately $22.5 million. By the fourth quarter of 2022, the company plans to triple the hashrate.

Cryptocurrency.
Since the company is exclusively engaged in mining and accumulation of bitcoins, its financial condition directly depends on the bitcoin exchange rate. The latter is still a highly volatile instrument, quite capable of sobering up investors with corrections of several tens of percent: only recently the coin corrected to 45% from the peak values ​​of November and may continue to fall.

State regulation.
For the most part, government officials in economically developed countries do not sympathize with a decentralized alternative to traditional banking operations and in every possible way seek to impose their own rules on the DeFi sphere..

For instance, The US Securities and Exchange Commission immediately after the IPO put pressure on the Coinbase exchange, and the Chinese regulator completely tightened the screws: all operations with cryptocurrency in the country are prohibited. Under such conditions, additional risk is created for Riot Blockchain shares, as they will immediately react to any such news by dropping the price.

Unfree cash flow.
Riot Blockchain's free cash flow is habitually negative, but over the past year this number has increased five times. The reasons are clear: the company spends huge money not only on the purchase of equipment and the arrangement of giant mining farms, but also for the absorption and accession of other businesses.

In May, Riot closed the deal to acquire the largest North American mining complex, Whinstone US, for $50 million., and 1 December acquired electrical equipment manufacturer ESS Metron for another 50 million. While there are no reasons to panic about the financial condition, but the business should start earning and cover costs as soon as possible. 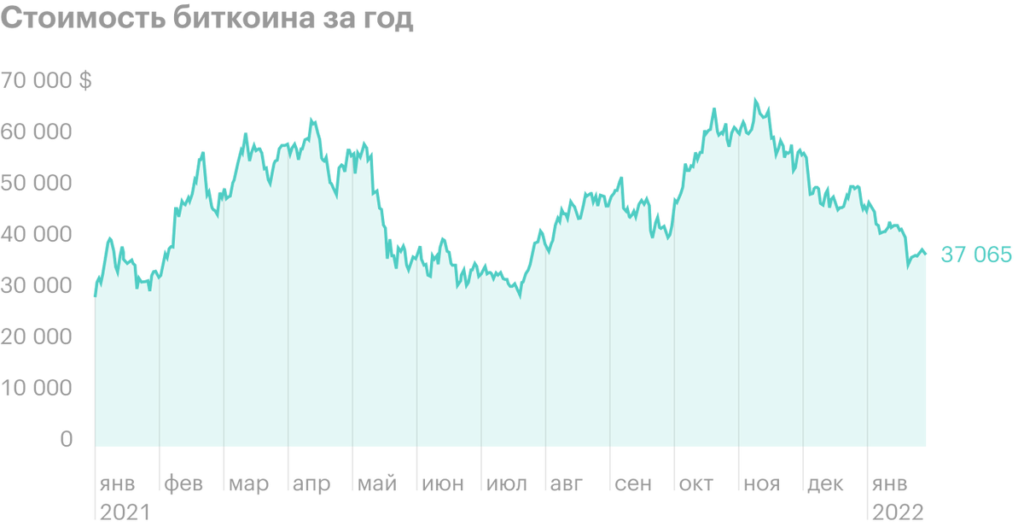 Cryptocurrency.
Despite the dissatisfaction of skeptics and the predicted collapses, bitcoin has quadrupled in the last two years, and at a ten-year distance has come a long way from 3 $ to a maximum of 67.5 thousand in 2021. Given that, that this currency has a deflationary model and there may be a limited number of bitcoins released into circulation, in the long run, all investments in it promise significant profits, although they are associated with high risks.

Revenue grew in 10 once.
For 9 months of 2021, the company earned $128 million, although for the entire previous year it showed only a modest 12 million. Given the significant expansion of business and production capacity, we can expect, that the revenue figure will continue to please investors with a noticeable increase.

Riot Blockchain - the opportunity to invest in bitcoin through stock market, which is available even to unqualified investors. The company's business is booming, it has a number of significant advantages over its competitors, but the classic risks of aggressive growth stocks remain for the price of his securities, which are combined with the threat of cryptocurrency volatility.

​​ $SPCE Why Virgin Galactic Shares Fall Again? Will Virgin Galactic conduct space flight tests next month or not? Space tourism company Virgin Galactic plummets for second straight session on Thursday, closing on 3,8% Fall, and a fraction of a percent lower on wednesday.   Galaxy assets grow amid growth of Canadian ETF on Ethereum

Teladoc (NYSE: TDOC) - American site, on which clients are provided with services in the field of telemedicine. The company shows a good level of improvement, but the limitations of the format do not allow this sector to be considered truly promising.. And this is not good news for the owners of the company's shares..   Great financial scandals

We conclude our conversation with Maxim Zakharov - an algorithmic trading professional. FirstSecond Lifestyle of an exchange lonerStrategy of cubes It would be necessary to lay strawsLess timeframe - more secretsOil futures Lifestyle of an exchange loner - You are a member of the club of algorithmic traders? - Not, i'm a loner. But we have a certain company, which used to periodically meet at Smartlab conferences, while they were.   Great financial scandals

We end the conversation with Maxim Zakharov, an algorithmic trading specialist. 1-2nd Lifestyle of an exchange lonerTactics from cubes It would be necessary to lay strawsLess timeframe - more secretsOil futures Exchange loner Lifestyle - You are a member of the club of algorithmic traders? - Not, i'm a loner. However, we have a certain company, which previously gathered from time to time at Smartlab conferences, while they were.   IPO Teads (financial model)