In mid-February, Walmart presented financial results for the fourth quarter, which exceeded the expectations of investors and analysts. Basic moments

Walmart USA showed neutral results in the last quarter. Net revenue increased by 5,7% from 99.585 billion to 105.279 billion dollars against the background of a high base last year. Revenue from the direction of e-commerce has not changed much, comparable sales added ~ 5,6%: traffic growth was 3,1%, the average check increased by 2,4%.

Walmart International. The second largest segment of the retailer, who earns about 18% of total income. The company operates in total in 26 countries, besides the USA. In addition to Walmart's main brand, many local brands are used in these markets.: for example, in Brazil – Grupo BIG, in the UK - Asda, in Japan, Seiyu, in Central America , Pali and Mas x Menos, in Africa — Massmart, Builders, Game, Makro and others.

READY , but not Kamsky , a about, how gold is manipulated

Moving on to fourth quarter results, it is worth noting, that they were extremely weak due to the sale of Walmart assets for $ 10.1 billion, the two largest deals are the sale of controlling stakes in the British retailer Asda and in the Japanese network Seiyu. Segment net revenue decreased by 22,6% to $26.997 billion, and operating profit by 13,7% to $0.832 billion.

Sam’s Club. This is an American network of wholesale and small wholesale trade of club type., which works in 44 U.S. states and Puerto Rico. Only customers can make purchases in these stores, who bought an annual membership for 45 $, if you need a standard package, and for 100 $, if additional options are required.

In the fourth quarter, this segment showed the strongest results in comparison with the rest of the company's divisions.: net revenue compared to the same period last year increased by 16,5% from $16.527 billion to $19.249 billion. The main reason is the double-digit growth in comparable sales and e-commerce.. The first indicator increased by 16,3% due to the growth of traffic and the average check, and the second on 21% against the background of strong demand from customers.

Walmart's net profit in the fourth quarter increased from -2.091 billion to 3.562 billion dollars compared to the same period last year. The strong difference is explained by the write-off: against the background of the sale of British and Japanese assets, the company recorded a loss in 2,66 $ per share, or approximately $7.5 billion.

At the same time, if you look at the adjusted indicator, then it has grown year-on-year by 10% to $4.2 billion or 1,53 $ on 1 share. Next, we will analyze, for which items the net profit was adjusted:

Walmart's operating cash flow in the fourth quarter decreased by 33% from $36.074 billion to $24.181 billion due to increased inventory values and purchases to support strong sales, as well as in view of the increase in the salaries of employees. Free cash flow decreased even more – by 57% to $11.075 billion on the back of weak operating flow and higher capital expenditures, which year-on-year added 28%.

What will shareholders get

Walmart is not fast-growing, and a long-established business: for the latest 5 for years, the retailer's financial performance grew on average by 3%, therefore, investors receive the main income at the expense of dividends and buyback, which leads to a further increase in the exchange value of shares on the stock exchange.

In 2021, the retailer distributed $ 15.9 billion to its shareholders, of which $6.2 billion was paid in dividends, and $9.8 billion by a buyback. Current yield — 4,2%. Next year, the company planned a $10 billion buyback and four quarterly dividend payments in the amount of 0,56 $ Each. Estimated payment date: 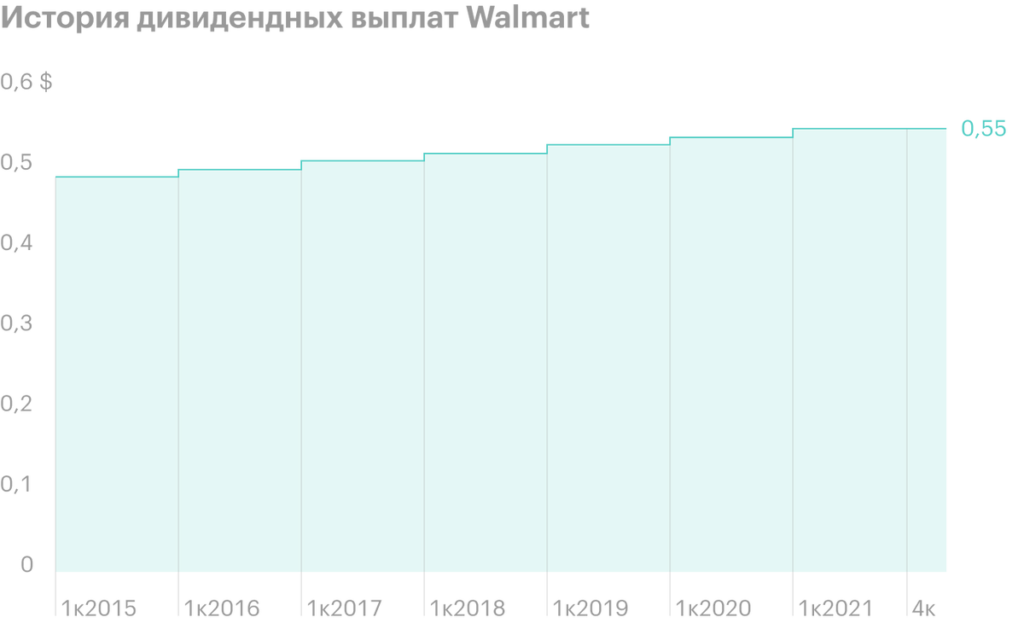 In addition to publishing financial results, management also announced its forecast for next year.:

Walmart delivered excellent financial results based on the fact that, that the retailer sold its foreign assets worth more than $ 10 billion. In the fourth quarter, the company's revenue increased by 0,5%, EBITDA - on 3%, adjusted net profit — on 10%. Coupled with this, the management announced a good forecast for the next year and announced an increase in dividends.. Investors liked the results: Walmart shares have risen in price by 4,01%.

Is it worth buying shares of this retailer now or is it better to wait for the price to drop? The second option seems to be more preferable.. Attractive can be considered a rating in EV / EBITDA < 10, which Walmart traded on previously, in the pre-Covid periods, T. is. promotions are interesting to buy more 124 $ and below.

​​ $SPCE Why Virgin Galactic Shares Fall Again? Will Virgin Galactic conduct space flight tests next month or not? Space tourism company Virgin Galactic plummets for second straight session on Thursday, closing on 3,8% Fall, and a fraction of a percent lower on wednesday.   Yes the savior came)

Teladoc (NYSE: TDOC) - American site, on which clients are provided with services in the field of telemedicine. The company shows a good level of improvement, but the limitations of the format do not allow this sector to be considered truly promising.. And this is not good news for the owners of the company's shares..   Exchange traded fund (ETF) from Twitter