Chipotle Mexican GrillCMG$1310.76BuyService in partnership with Tinkoff Investments. Quotes are updated every 15 minutes

For 30 years of development Chipotle has grown from one restaurant to a large international chain, which at the end of 2021 had 2918 American restaurants and 44 restaurants outside the US - in Canada and the UK.

The company has a high share of online orders: digital sales, including delivery, pickup and Chipotlanes format, allowed the network to earn about $3.4 billion in 2021, what constitutes 46% in overall Chipotle results. The company's overall revenue structure is as follows:

According to Technavio research, the average annual growth rate of the market for Mexican cuisine in the world in the next five years will accelerate to 6,65%. American companies will be the main beneficiaries, since the main growth will be recorded in North America: 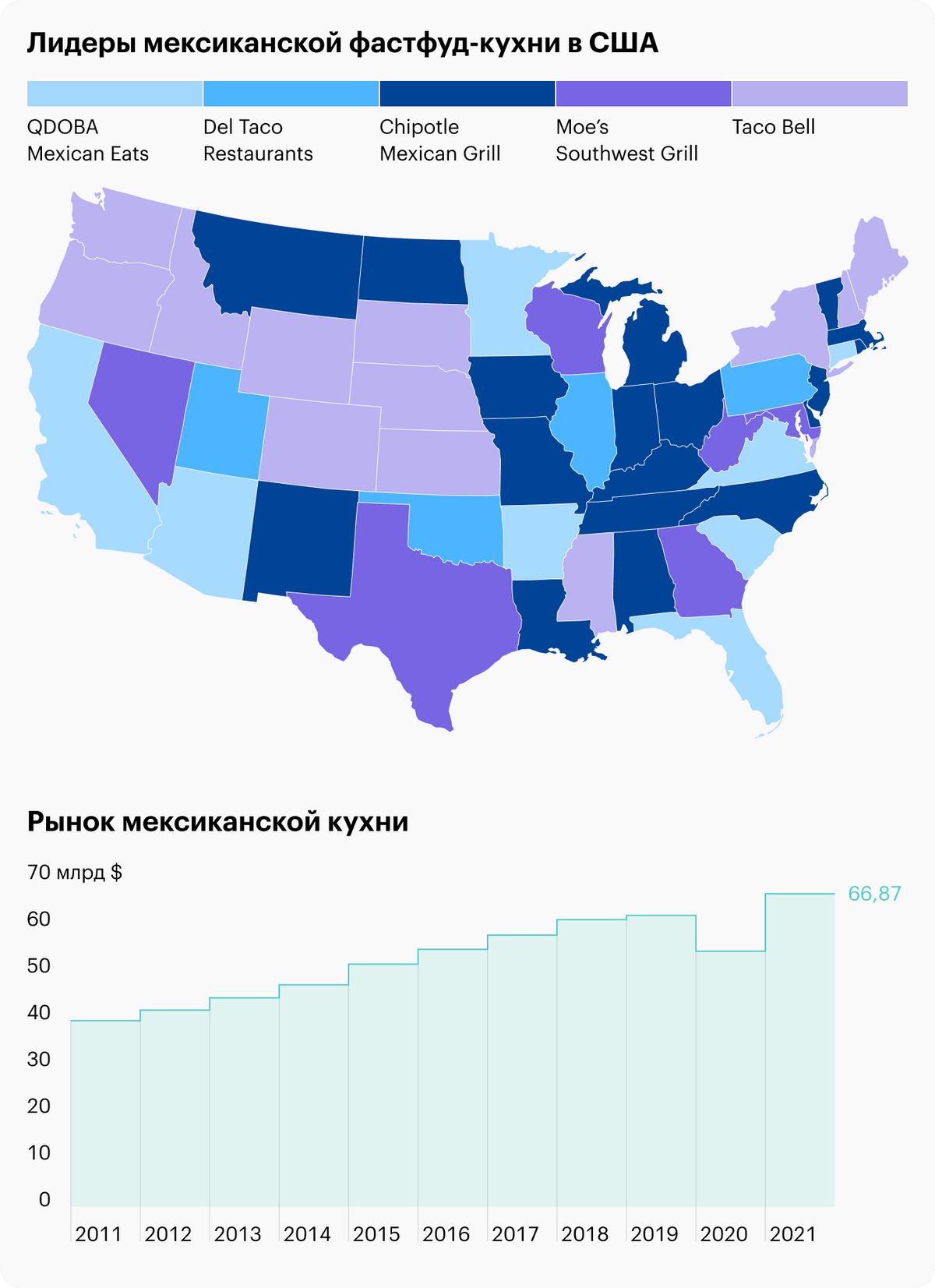 Current results and comparison with competitors

Chipotle - American Growth Story: the company increases its financial performance annually by an average of 15%. In 2022, the pattern will break, because the company, according to management, will show growth less 10% on the back of strong results last year, when sales increased by 26%.

Besides, management plans to increase its own network by 2022 8% – up to 3216 restaurants. The coronavirus pandemic remains the main deterrent.

Financial results of the company, billion US dollars

High visitor loyalty. Chipotle ranks second in the sector in the U.S. industry, second only to Chick-fil-A, and significantly outperforms competitors..

Protective online segment. Chipotle's digital business performed well during the pandemic: The company's sales in 2020 increased by 7% - and this despite the fact, that many chain restaurants were closed. To compare the results of competitors: McDonald's revenue fell by 9%, at Starbucks 14%, and at Texas Roadhouse 13%.

Outstripping growth. Double-digit growth allowed the shares of the American company to show more impressive dynamics compared to S&P 500 and industry competitors: Since the end of 2016, Chipotle's stock prices have risen by 463%.

No dividends. Chipotle does not pay dividends to shareholders, and investing in further growth. Trend, probably, continue, as in the medium term the company plans to open up to 7 thousand of its own restaurants in North America.

Evaluation. Chipotle multiples are among the highest in North America among industry competitors. This is mainly due to high visitor loyalty and faster growth compared to other companies in the sector..

Chipotle is a promising American asset in the restaurant sector, which is growing faster than other companies in the industry and has an extremely high valuation. If investors are not deterred by the second fact, then the company can be safely added to your portfolio, but desirable by EV estimate / EBITDA less 30, or 1164 $ per share, and ideally at EV / EBITDA less 25, or 975 $ per share. In 2017-2020, shareholders had such an opportunity.

Nothing lasts forever(гарантировано), except death and taxes!!!