In the past few months, several important events have taken place at Polyus, about which we will tell in more detail.

Changes in the structure of shareholders

Until recently, the controlling shareholder of the company was entrepreneur Said Kerimov, son of businessman and senator Suleiman Kerimov. But in April 2022, it came under EU sanctions. Around the same time, MKAO Wandle Holdings Limited, controlled by him, sold around 30% shares of "Polyus" of the company "Akropol Group" Akhmet Palankoev.

BUT 13 May 2022 Polyus said, that Said Kerimov ceased to be a shareholder of the company, because he donated 100% shares of MKAO Wandle Holdings Limited to the Fund for Support of Islamic Organizations. This non-profit foundation was established in 2012 by the Council of Muftis of Russia, Spiritual Board of Muslims of European Russia and Mufti Sheikh Ravil Gaynutdin. The head of the fund said, that the fund does not intend to participate in the day-to-day management of the company's business.

New head of the company

In April 2022, Polyus changed its CEO: Pavel Grachev, who headed the company since 2014, decided to leave his position and focus on developing his own business projects. In early 2021, together with his Polyus colleague Mikhail Stiskin, he became the owner of a large stake in Detsky Mir.. And in May of the same year, he established a company in the field of clean energy.

Alexey Vostokov became the new CEO of Polyus, who has also been with the company since 2014 and before that was in charge of corporate governance and international support. In particular, in 2019-2020 he was the corporate secretary of the company.

Investidea: Mueller Industries, because it's cheap

Changes in the Board of Directors

In March 2022, Maria Gordon left the board of directors of the company, Edward Dowling, Kent Potter and William Champion. And in April, Said Kerimov also left him..

Polyus announced that, that nominated 9 candidates to the interim board of directors for approval at an extraordinary general meeting of shareholders 6 June 2022. This list includes top managers of the company and one of its beneficiaries Akhmet Palankoev. The interim board of directors will seek candidates for the role of independent directors for approval at the annual general meeting of shareholders.

As we already wrote, many Russian companies refused to publish reports for the first quarter of 2022. Polyus joined this list.: the company switched to semi-annual publication of production and financial results.

But the delisting of depository receipts from foreign exchanges "Polyus" avoided. Recall, that Russian companies are now prohibited from placing receipts for their shares on foreign exchanges. But Polyus received permission from a special government commission to keep the listing.

Since the beginning of 2022, Polyus shares have declined slightly, by less than 6% — and traded at the level 12 300 R for pike, while the Moscow Exchange index over the same period lost about 37%. You can say, that in 2022 the company justifies the title of a representative of the protective segment.

However, the latest news significantly increases the uncertainty around the company.: investors don't know, what to expect from the new major shareholders of Polyus, What will the new CEO look like?, who will be on the new board of directors. And a more rare publication of business results will not allow you to track the company's affairs as quickly., like before. 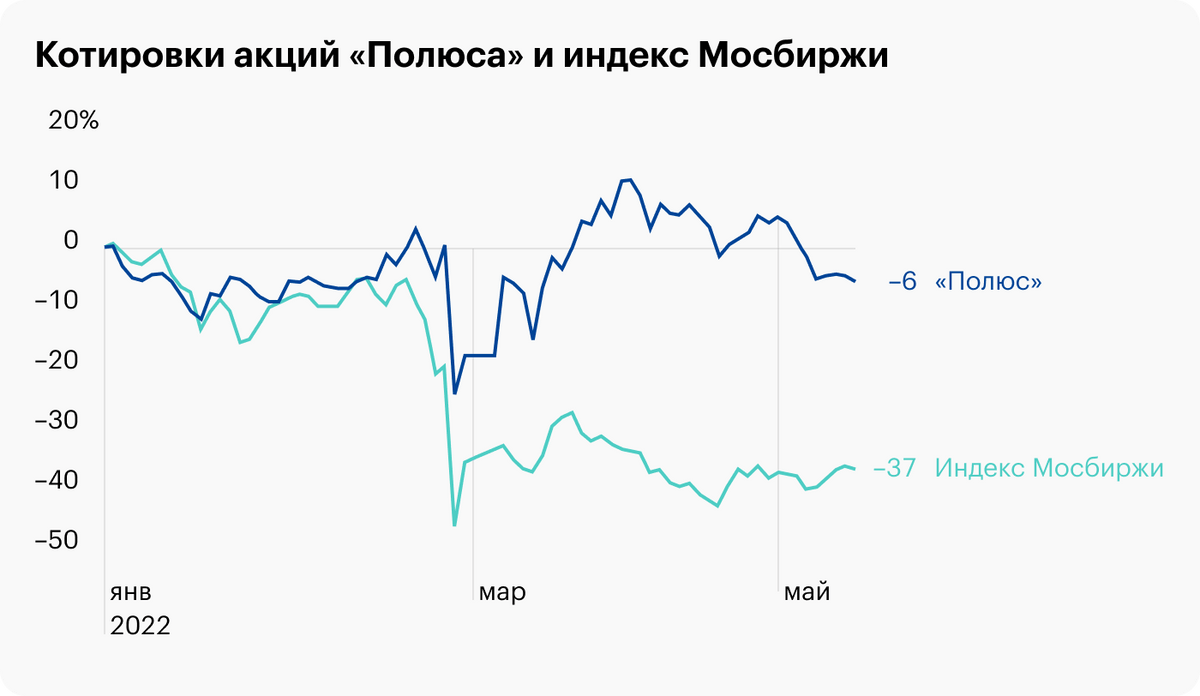