16 February, the company published a report for the fourth quarter of fiscal year 2022, which ended 30 January.

And here is how sales have changed in the main areas.

Gaming Graphics Cards - $3.4 billion (+37%). Demand for video cards is still high. The company stated: our video cards can mine cryptocurrency, but we are not sure, what exactly is the cause of their deficiency.

Last year, Nvidia limited the mining capabilities of video cards in order to, so that gamers get more of them. For miners, the company has developed separate devices - cryptocurrency mining processor (CMP). But quarterly sales of these devices are disproportionately smaller - only $ 24 million..

Professional visualization - $0.6 billion (+109%). Sales of chips for design and rendering grew up, because many companies have transferred employees to remote work and buy additional workstations.

Auto - $0.1 billion (−14%). Here, sales fell, since the production of cars was reduced due to a shortage of components.

According to Nvidia, in the first quarter of fiscal year 2023, revenue will grow by approximately 40%, up to $8.1 billion. That's more than analysts' expectations of $7.3 billion.

Another company said, that in the current quarter will write off $ 1.4 billion of operating profit. This is a forfeit, that Nvidia will pay SoftBank for canceling the deal to buy Arm.

Post-market, Nvidia shares fell by 3%, to 258 $. The company traditionally reported better than experts expected, but investors could fix part of the profit.

Since the beginning of the year NVDA shares, like many technology companies, sank on 12% in anticipation of tightening policy FED. In 2021, the shares are up by 125%. 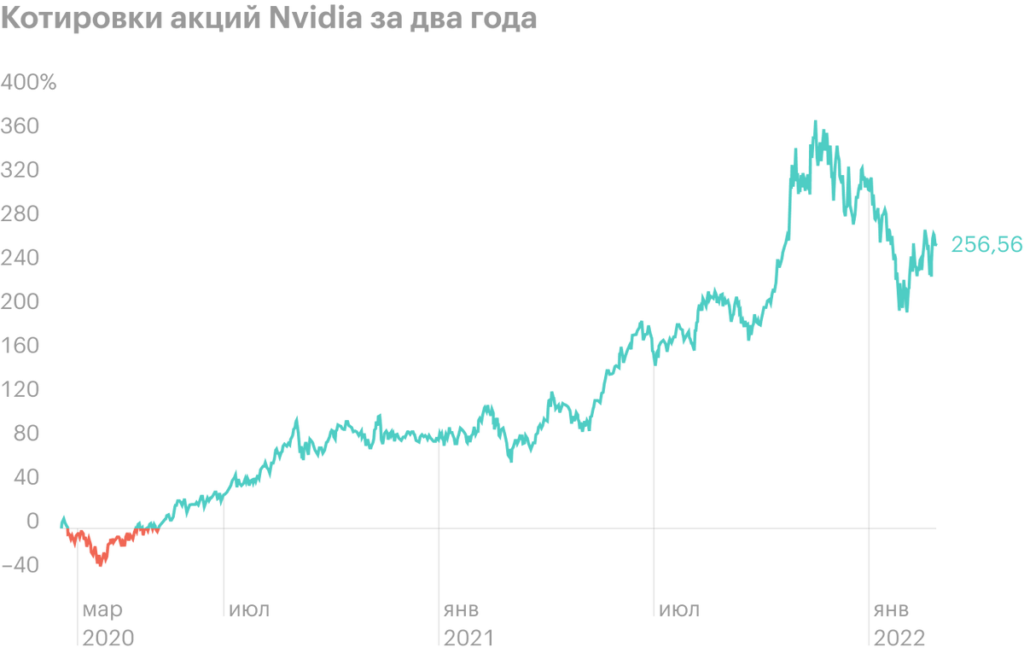 Teladoc (NYSE: TDOC) - American site, on which clients are provided with services in the field of telemedicine. The company shows a good level of improvement, but the limitations of the format do not allow this sector to be considered truly promising.. And this is not good news for the owners of the company's shares..   Trend-following swings