Moscow Exchange spoke about the main results of trading in federal loan bonds 21 Martha. This is the first day of trading on the Moscow exchange stock market after a three-week break: it has been closed since 28 February.

With 10:00 to 11:00 bidding was in the format of a discrete auction: the exchange collected applications for the purchase and sale of securities, and based on the results determined the price of transactions. Then OFZs were traded with 13:00 to 17:00 in normal mode.

Deals with bonds concluded 91 professional participant and 82 thousand private investors. For comparison: in January-February 2022, transactions with OFZ on the exchange were concluded by an average of 17 thousand people per day.

OFZ trading volume amounted to 13.8 billion rubles, of which the opening auction accounted for 2.6 billion. This is far from a record figure..

Profit was less, than investors expected

Most OFZs fell in price relative to the closing price 25 February, while several issues fell by more than 10%. The fall in price led to an increase in profitability, and follow-up 21 In March, the effective yield to maturity of various OFZ issues was:

The table below shows the profitability of some OFZ-PD issues at the end of trading 21 Martha.

Yield was less than the rate of the Central Bank, which is now equal to 20% per annum. And below, what many private investors expected, as well as some institutionals. So, UK "Alpha Capital" laid, that the short-term yield will be about 20%, medium — 18—19%, long — 15—17% per annum.

5 the most popular questions about the W-8BEN

Yield of the shortest OFZ, to maturity of which less than a year, below, than the return on bank deposits. So, now you can find deposits for three months with a rate 24% per annum, for six months — with a rate of up to 23,9%, for a year — with a rate 17%. Even the largest banks have offers for 3-6 months with a rate of about 20% or a little higher. At the same time, there is a tax benefit on deposits - you can not pay from part of the income. NDFL, – which makes them even more profitable compared to short OFZs.

Long OFZs now yield lower yields, than short - with a maturity of up to a year or two, and the coupon-free yield curve is inverted. It's not a normal situation. The norm is considered, when long securities give a higher yield - this is a premium for additional risk, — and the yield curve rises as the maturity increases.

At the same time, long OFZs allow fixing higher yields, what are the contributions, and for a longer period, and with a reduction in the rate of the Central Bank, they will rise in price. It may be of interest to investors, believing in an imminent rate cut or considering, that in the long term, the yield of these OFZs will be higher than inflation. But we must remember, that the rate increase will lead to a fall in the price of long OFZs. 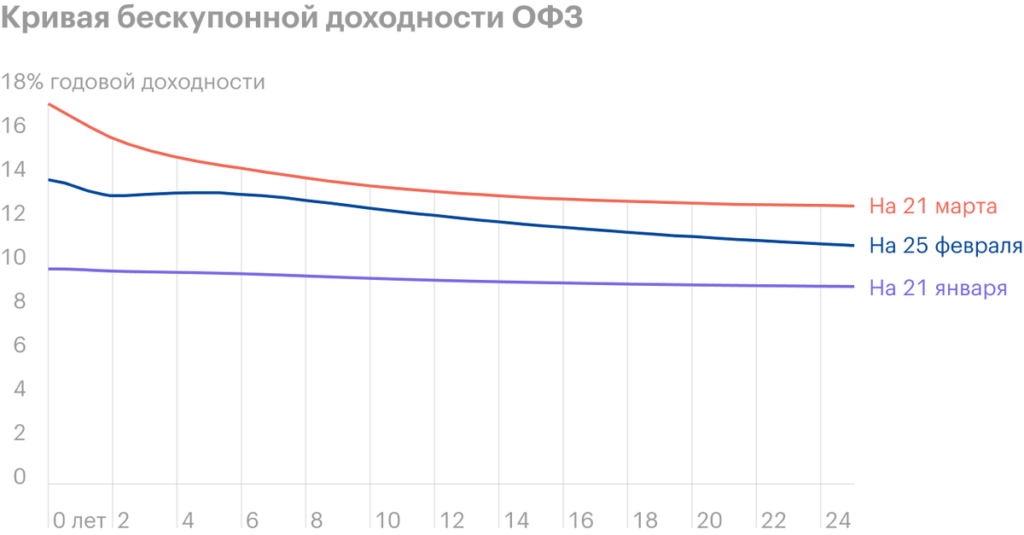 Earlier, the Central Bank said, what will buy OFZ when trading resumes. 21 In March, there were very large purchase orders in ofZ cups , including more than 100 billion rubles..

But it's below the price., on which the bulk of transactions went, so it is unlikely that these bids had a noticeable impact on trading volume. "Interfax" with reference to a survey of market participants writes, that on the first day of trading, the Central Bank almost did not participate in transactions.

On Tuesday, full-fledged OFZ trading is held on the Moscow Exchange. With 09:50 to 10:00 there was an auction opening, in 10:00 Substantive session started. With 18:40 to 18:50 a closing auction will be held. Short selling is still prohibited.

Regional bonds, municipalities and companies, and stocks and funds are not yet traded.

​​ $SPCE Why Virgin Galactic Shares Fall Again? Will Virgin Galactic conduct space flight tests next month or not? Space tourism company Virgin Galactic plummets for second straight session on Thursday, closing on 3,8% Fall, and a fraction of a percent lower on wednesday.   Exclusive Interview: Charles Kirk from The Kirk Report

Teladoc (NYSE: TDOC) - American site, on which clients are provided with services in the field of telemedicine. The company shows a good level of improvement, but the limitations of the format do not allow this sector to be considered truly promising.. And this is not good news for the owners of the company's shares..   Pipes and tariffs: studying the first half of the year "Transneft"