24 In March, the moscow exchange held the first trading in shares of Russian companies since the end of February. Most shares rose in price relative to the price, Which was 25 February, and the Mosbirzhi index has grown.

In total, the auction was allowed 33 shares from the Moscow Exchange Index: Gazprom, Rosneft, Sberbank, Surgutneftegaz and others. That is, all securities from the index were traded., except 10 shares and depositary receipts, considered foreign securities, like Yandex and HeadHunter.

With 09:50 to 10:00 there was an auction opening. Then there were the usual auctions with 10:00 to 13:40, then to 13:50 there was a closing auction. Trading turnover amounted to 108.6 billion rubles, Moscow Exchange reported. Transactions with shares were concluded by 121 professional participants and 567 thousand private investors. The share of individuals in the total trading volume was 58,2%.

RTS Index, or the dollar version of the Moscow exchange index, decreased by 9% compared to 25 February, up to 852.64 points. 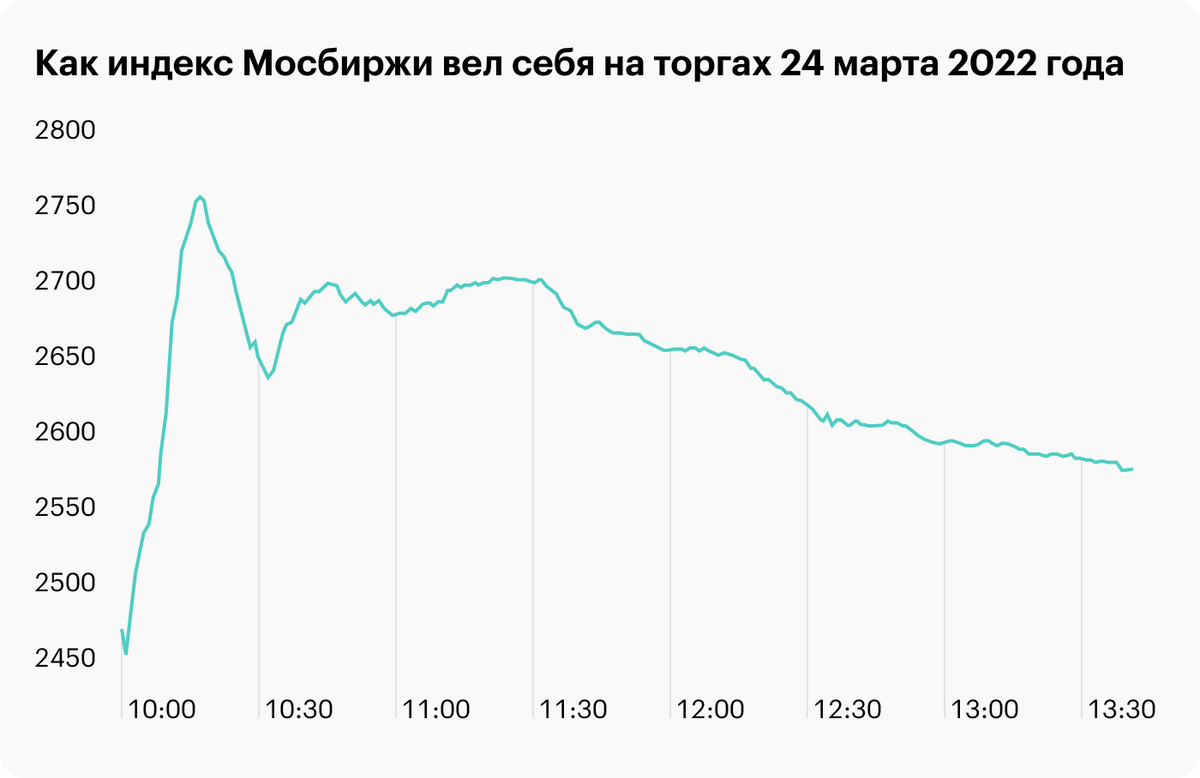 What results did the stock show?

The shares of "PhosAgro" grew the most - on 26,62%, to 6350 R for pike. Also, ordinary shares of Tatneft have risen in price - on 20,11%, to 424 R per share. The price of individual securities recovered to the levels before 24 February or even exceeded them - for example,, the already mentioned PhosAgro and FGC UES.

The price of many stocks fluctuated greatly throughout the day.. Trading in some stocks was even suspended due to too strong growth..

So, preferred shares of Sberbank began to be traded on 130,06 P and quickly grew to 157,95 R. At the same time, they were worth more than ordinary shares of Sberbank, what is considered an abnormal situation. By the end of the day, their price dropped to 135,4 R. Trading volume was lower, than at the end of February.

The reason for the growth of most shares of Mosbirzhi may be the increase in the price of raw materials recently, including oil, gas and gold. Because of this, the profits of commodity companies may grow., what, among other things, will lead to an increase in dividend yield. And now it is forbidden to short Russian shares., which also affects the price of securities.

No data yet, when the rest of the shares and depositary receipts will start trading on the Moscow Exchange. Besides, unknown, will it soon be possible to make transactions with bonds, except for already traded OFZs, and exchange-traded funds.

Teladoc (NYSE: TDOC) - American site, on which clients are provided with services in the field of telemedicine. The company shows a good level of improvement, but the limitations of the format do not allow this sector to be considered truly promising.. And this is not good news for the owners of the company's shares..   Cynthia Case (Cynthia Kase)