Twitter (NYSE: TWTR) is an American social network, in which users publish short notes in blog format. In terms of popularity, it ranks second in the world in the category of "social networks and online communities" after Facebook, excluding Chinese social media.

In mid-February, Twitter presented a report for the fourth quarter of 2021, which not everyone liked. Key highlights of the report:

Twitter's revenue by type of earnings is distributed as follows:

By country and region, revenue is divided into two segments:

Twitter's total revenue grew by 22% from $1.289 billion to $1.567 billion thanks to strong results from the advertising segment, which increased by 22% to 1.413 billion dollars.

1 January 2022, the management announced the closing of the deal for the sale of part of the business of the licensing segment - the MoPub platform, AppLovin for $1.05 billion in cash. The money from the sale will be used to increase the effectiveness of advertising and the development of Twitter Blue subscriptions. After the transaction, the license segment will change its name to "Subscription and other income".

Twitter's net profit fell by 18% from 0.222 billion to 0.182 billion dollars due to outstripping growth in total expenses, who grew by 35% up to $1.4 billion. The main reason is the increase in the number of personnel and the increase in the cost of IT infrastructure development and marketing..

To mitigate shareholder anger, board of directors announces new $4 billion share buyback, of which 2 billion will pass under the accelerated ASR procedure. 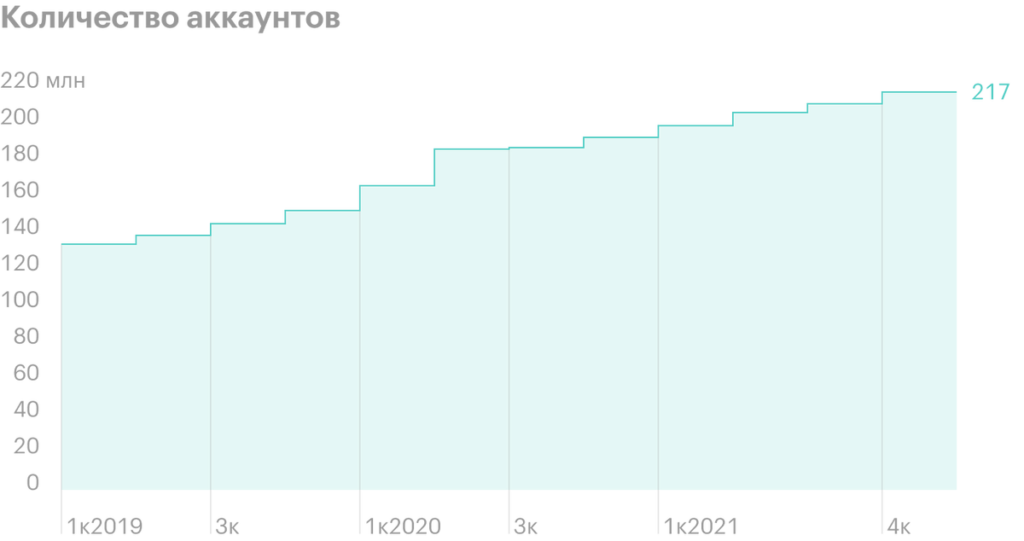 After the publication of financial results, Twitter management announced two forecasts: for the first quarter of 2022 and for 2022.

Forecast for the first quarter of 2022:

Twitter presented mixed financial results in the last quarter of 2021: revenue increased by 22%, and adjusted EBITDA and net income fell by 4% and 18%, respectively.. To somehow brighten up the weak financial results, management decided to increase the buyback. Admittedly, it helped in part..

The future dynamics of the company's share price is largely related to the business plan.. Will the management be able to reach the announced goals?? At the moment, the growth forecast for mDAU looks overstated, and in terms of revenue - quite real. In the last quarter, Twitter's audience grew by only 6 million users, and over the next two years, it should add more than 12 million every quarter., to reach its goal of 315 million accounts by the end of 2023.

Teladoc (NYSE: TDOC) - American site, on which clients are provided with services in the field of telemedicine. The company shows a good level of improvement, but the limitations of the format do not allow this sector to be considered truly promising.. And this is not good news for the owners of the company's shares..   How many pros got divorced