20 January, the company published a production report on the results of 2021. The results were very mixed. On the one side, steel production volumes returned to pre-crisis levels and showed good dynamics. On the other hand, the company's sales have dropped significantly compared to last year.. To understand, why did this happen?, should assess the overall situation in the steel market and carefully study the main operating indicators.

We recently wrote in detail about NLMK's business, so, if missed, be sure to read.

Position in the industry

The situation in the ferrous metallurgy market remains uncertain. Much depends on, how quickly the world economy will return to sustainable growth, and the world's largest consumer of steel, China, will deal with its real estate crisis.

It is worth noting, that the industry quickly recovered from the crisis of 2020. Already in the second half of the year, steel prices went up thanks to the recovery in demand in the world market and grew until the first half of 2021. But since the third quarter, price growth has slowed down., turned into a fall, and following the results of the past year, steel prices corrected from the peak. 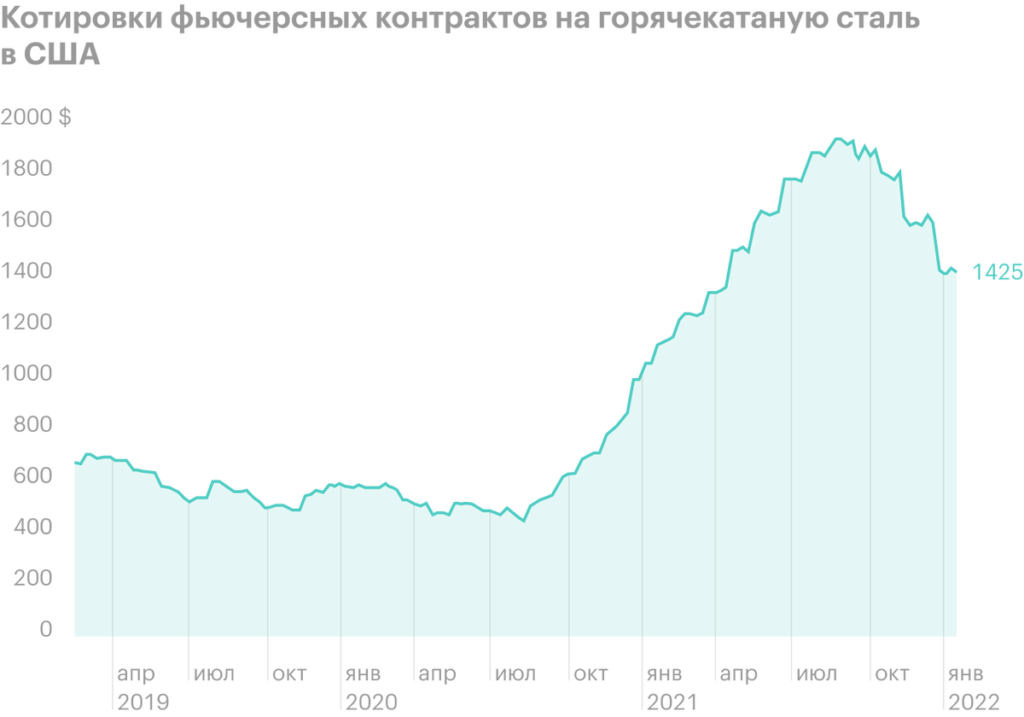 In the Russian market, steel prices began to fall from mid-August, among other things, under the pressure of internal factors.

At the end of June, the Russian government approved temporary duties on the export of metals from 1 August to 31 December 2021, to stabilize the situation in the domestic ferrous metallurgy market.

These measures will put pressure on the Russian steel industry and NLMK's key indicators, because the company has production assets outside of Russia.

At the end of 2021, steel production increased by 10% — up to 7.4 million tons — thanks to the modernization of blast furnace and steelmaking production. At the same time, the total capacity utilization decreased to a record low in recent years — 93%.

Coke. Production volumes decreased by 4% — up to 5.49 million tons — due to a drop in output at production sites in the Lipetsk Region and Altai Territory.

Iron ore raw materials. Production increased by 8% — up to 19.97 million tons — thanks to the expansion of the capacities of Stoilensky GOK in the first half of 2021.

Metal products. Gross production increased by 6% — up to 19.28 million tons — against the backdrop of an increase in the production of flat products by 7%, commodity slabs - on 20% and long products - on 17%. Despite the impressive growth, output of steel products for third-party buyers decreased by 1% - up to 17.12 million tons. This is due to an almost threefold increase in NLMK's consumption to 2.17 million tonnes..

In my opinion, it's a positive signal., and that's the logic: the more semi-finished products are used to produce high value-added products, the higher should be the profitability of sales and operating profit of the company.

Structure of metal products production in 2021

In real terms, NLMK's consolidated sales decreased by 4% - up to 16.85 million tons. The main reason is the drop in sales of semi-finished products by 19% year to year, up to 5.63 million tons.

Let me remind you, that steel demand fell in the first half of 2020 amid the pandemic and general uncertainty in the iron and steel market. NLMK sold significant stocks of semi-finished products, instead of using them to produce more expensive products. Market prices and demand have recovered in 2021, therefore, the company increased the consumption of semi-finished products, to produce more high value-added products.

NLMK supplied 5.22 million tons of steel products to foreign markets 22% less, than last year. This is due to the high base, when the company exported large volumes of semi-finished products.

Dynamics of sales in foreign markets

Sales structure of steel products in 2021

At first sight, NLMK's 2021 production results look weak. The company reported a reduction in the production of steel products and in-kind consolidated sales. But if you look deeper into the report and consider the structure and dynamics of individual types of products, then the situation looks much better.

Against the backdrop of a recovery in demand and prices for steel products, the company increased domestic consumption of semi-finished products to create higher value-added products. As a result, sales of finished products reached a multi-year high, which will have a positive effect on the financial performance of the company, especially given the high average selling price for the financial year.

But don't forget about, that the ferrous metallurgy industry is one of the cyclical, where the rise in prices and demand for products is quickly replaced by a fall. IN 2 half of 2021, prices have already corrected significantly from their peaks, and the downward trend will continue in 1 half of 2022.

In the Russian market, additional pressure on the company is exerted by the state, which strictly regulates the ferrous metallurgy industry and monitors, so that there is no cartel between manufacturers. Due to the introduction of export duties in the second half of the year, sales abroad became less profitable and led to an increase in the share of sales within Russia. Besides, claims from the FAS, leading to significant penalties, hang over the company "sword of Damocles".

Teladoc (NYSE: TDOC) - American site, on which clients are provided with services in the field of telemedicine. The company shows a good level of improvement, but the limitations of the format do not allow this sector to be considered truly promising.. And this is not good news for the owners of the company's shares..   Neurocrine Biosciences Review: promising developments against rare diseases