In June, the last companies from S&P 500 reported for the first quarter. This is what happened to their profits now and this is how it was on average over ten years:

Here's how S's revenue and profit have changed&P 500 and its individual sectors.

Compared to the first quarter of 2021, aggregate sales of companies from the S&P 500 up by 13,6%. Excellent result, but there is a nuance - this is a high level of inflation.

Over the year, prices for goods and services in the US officially increased by 8-9%. And that means, what are the real sales of companies, that is, net of inflation, increased much less.

And for some, it's a problem.: not all companies can raise their prices quickly. For example, these are sellers of goods of second necessity. Here, sales growth was one of the weakest - an average of 8-9%, that is, at the level of inflation. As a result, profits and margins of companies fell, but more on that later.

But in the oil and gas sector, the situation is reversed.: here revenue increased the most - by 56,1%. Over the year, Brent crude oil has risen in price by 45%, which had a good effect on the incomes of oil workers.

Sales in the raw materials sector also grew significantly, which is now being pulled by fertilizer producers, - on 26%.

Year-on-year total operating profit S&P 500 rose by 4,2% – the worst result in the last three years, except for the collapse during the coronacrisis. Probably, rapid profit growth, which happened in 2020-2021, is a thing of the past.

Despite the overall positive dynamics, profits in some sectors fell. For example, it's utilities, Communications and Finance. But the main loser is still the same – goods of second necessity.. The sector lost in profit immediately 41%.

Due to rising gasoline costs, raw material, Labor, logistics and other operating margin S&P 500 decreased from 13 to 11,9%. And that means, that the cost of production of goods has increased more, than revenue.

The inability of companies from some sectors to shift costs to the buyer led to a decline in profitability.. First of all, these are cyclical sectors: all the same communications, finance, goods of second necessity.

But there is good news.: current margin S&The P 500 is still above the historical level in 10%. The margin of safety of the index still remains, although the situation varies from sector to sector. 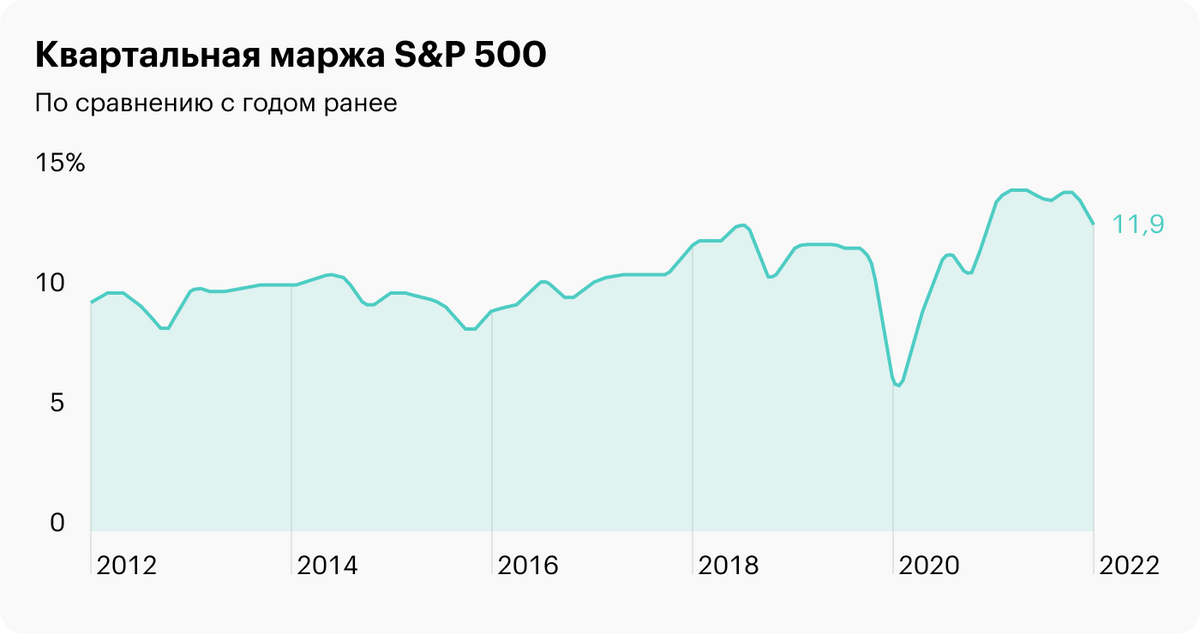 Short-term stock price is affected by a variety of things: macrostatistics, experts' forecasts, geopolitics and so on. At a long distance, the value of shares determines the dynamics of profit..

According to the forecast, Profit S&P 500 year-on-year in the second quarter will grow by 5,9%, and by the end of 2022 — on 7,8%. Good prognosis, but he, seems, does not take into account the possible downturn in the US economy.

Season of Reports for the second quarter will begin soon, in mid-July. Company results and executive statements will show, how business copes with the main problems today: high inflation, tough politics FED and weak consumer activity.