Today we have a speculative idea: take shares of the FirstCash pawnshop network (NASDAQ: FCFS), in order to capitalize on the speculative growth of these shares from investors' expectations of a recession.

Why stocks can go up: because we can expect an influx of investors into these stocks due to their expectations about the possible start of a recession.

FCFS is a network of pawnshops in the Americas. According to the company's annual report, its revenue is divided into the following segments:

Rusal's results for the first half of the year 2022 of the year: save only aluminum prices 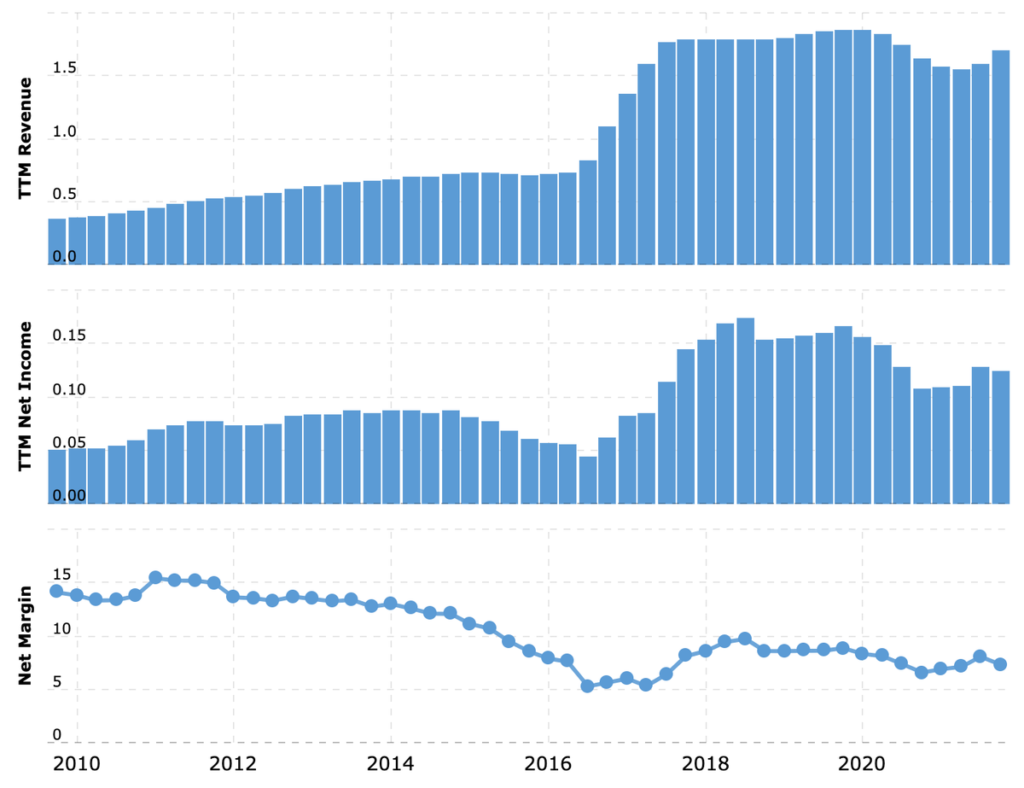 Fell down. Since October 2021, the company's shares have fallen heavily without a good reason: with 94 to 66,68 $. Think, that we can expect a rebound.

Recession. Is considered, that pawnshops are good in a recession - because the welfare of the majority is deteriorating and the majority are more actively using the services of pawnshops. It's basically like this, so we can hope, that investors will soon crowd into the company's shares, counting, that “pawnshops are a promising topic”. Here, Really, there are subtle moments, but we will talk about them in the section "What can interfere".

The threat of a global recession in connection with the well-known events in Eastern Europe has slightly increased, so there is reason to hope for an influx of investors into these shares. Especially as US consumer sentiment is deteriorating.

Promising. Looking at FCFS from a long-term investment perspective, years on 10, then investments in her business have the same prerequisites, as in the case of cheap shops like Dollar Tree, - the impoverishment of the middle class in the United States. The company pays a dividend of 1,8% per annum, what constitutes 1,2 $ per share per year. From this point of view, one can cautiously hope for a tangible increase in its income and, respectively, dividends.

The size. The company is not very expensive: P / S she has a little less than two, P / E a little less 22, and capitalization is 3.2 billion. This will make it easier to pump shares.

Rate hike. US loans coming soon, yes and all over the world, become more expensive, which could lead to a large influx of new customers into pawnshops even without a recession. Loan standards to be tightened, and they, who can apply for a loan, will be less likely.

Latin America. The company has a strong position in Latin America. Life there is hard even without recessions, so I would expect good growth rates from FCFS business in this region.

Can buy. Considering all of the above, it is more than likely that the company will be bought by some financial institution or even a private foundation. FCFS is a no-nonsense startup with great growth prospects, but still stable, a strong business with a clear market environment.

Accounting. FCFS is too leveraged. She has 2.028 billion in debt, of which 392.2 million must be repaid during the year. She has about 120 million in cash., and there are still 55.356 million debts of counterparties.

Basically, if we count the loans still issued by the company and the jewels “leased”, then the amount at the disposal of the company will increase to a billion. And the increase in debts of the company occurred due to spending on business expansion. Still worth considering, what's in the structure of things, pledged to the company, 57% - this is jewelry.

Taking into account the strong increase in the value of precious metals due to known events, the company's assets are, in principle, quite serious. But such a burden can lead to a reduction in payments.. The company spends nearly 39,5% from her profit. Dividend yield well above average for S&P 500, so if payments are cut, then stocks could drop heavily due to an exodus of dividend investors.

Didn't take off. Against the backdrop of 2008, the company's quotes did not grow much, although its operating performance then improved. In other words, if there is a real crisis, then the company's shares may not just not grow, but also fall. "Everybody fell, and I fell". So we rely more on the speculative growth of their quotes, than for that, that stocks will actually rise in a real recession.

31 July 2021 I took these shares at 79.2 $ with the expectation of selling them for 89 $ during 15 months on the rise of "recessionary fears". But the stock reached the desired mark in just 39 days. Today, it seems to me, FCFS is in top shape, than then, — and the situation for the company looks better, than in summer 2021.

I advise you to look at the news section on the company's website, in order to have time to dump shares in the Russian Federation before, how they will fall due to the cancellation or reduction of dividends. Usually, the bulk of investors on the St. Petersburg Exchange look at, how quotes behave after the market opens in the US, and not particularly closely monitors news from the USA. So,, if the news comes out before the market opens there, then we will have the opportunity to sell shares before they fall.

However, now it's problematic: SPb-Exchange opens much later, than usual, which reduces our time advantage to zero. Will hope, soon "SPb-exchange" will return to normal operation.