Yield curve inversion is the main gorevestnik in the stock market. Probably, in 2022, the topic of inversion will again appear in the news headlines. Here's what to know about it.

What is the yield curve?

The yield curve is built for different debt instruments, for example, for U.S. Treasury bonds. This curve shows, how the annual yield of bonds changes depending on the maturity.

In a healthy economy, the curve has a normal appearance and increases to the right.: the longer the time to maturity, the higher the yield. Here's why.

Risk Premium. Over a long distance, the probability of negative events increases. For example, the borrower may go bankrupt and the investor will lose money. Higher risk, higher return.

Inflationary expectations. Prices of goods and services rise over time, therefore, the real return on investment decreases. To compensate for this, investors demand a premium. 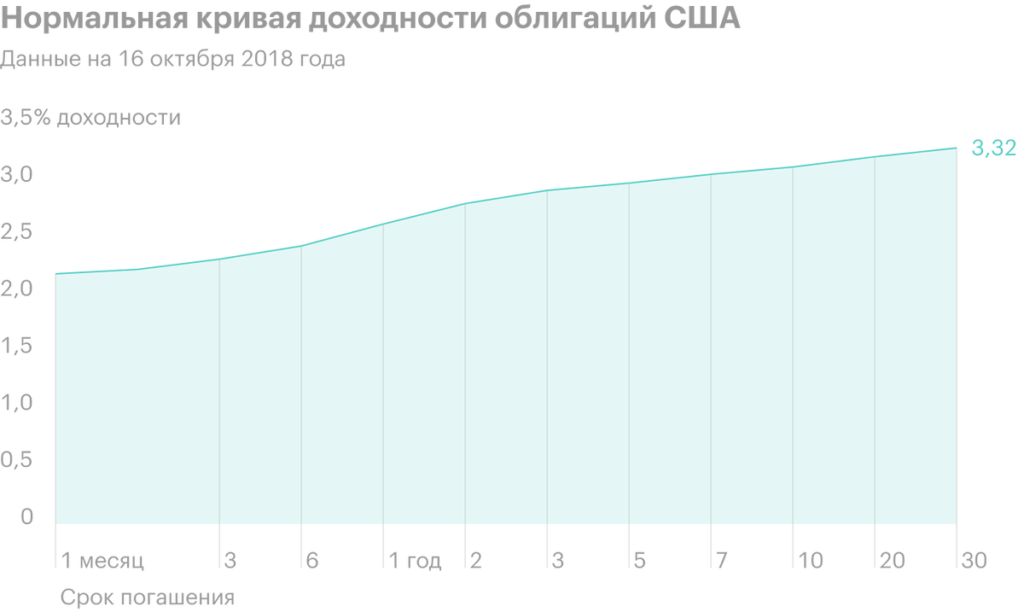 What is the yield spread?

When they talk about the curve, then the concept of "spread" is often mentioned. This is the difference in the yield of long and short securities..

For example, the yield of ten-year bonds is 3% per annum, two-year-olds — 2%. A difference of one percentage point is the spread.

Investors receive such a premium for investing in long securities.. If the yield curve is normal, spread will be greater than zero.

What determines the size of the spread

The steepness of the yield curve and the size of the spread are determined by various factors. For example, central bank rate. This is how it works.

The rate is raised – the spread decreases. After raising the rate, investors begin to sell bonds: their price is falling, and profitability is growing. At the same time, the yield of short bonds is growing more, because they react more strongly to the bet. This reduces the spread - the premium for owning long securities.

Remembering the last two examples is simple: the rate and spread usually move in the opposite direction. This is clearly visible on the chart.

Sometimes short bonds give a big yield, than long. Then the yield curve inverts, and the spread drops below zero.

This is an unusual situation., because the market gives a higher assessment of short-term risks, not long-term. Investors sell short securities and buy long ones – safer, but with low profitability.

This is because, that they expect a recession — a downturn in the economy. And as history shows., usually expectations do not let investors down. 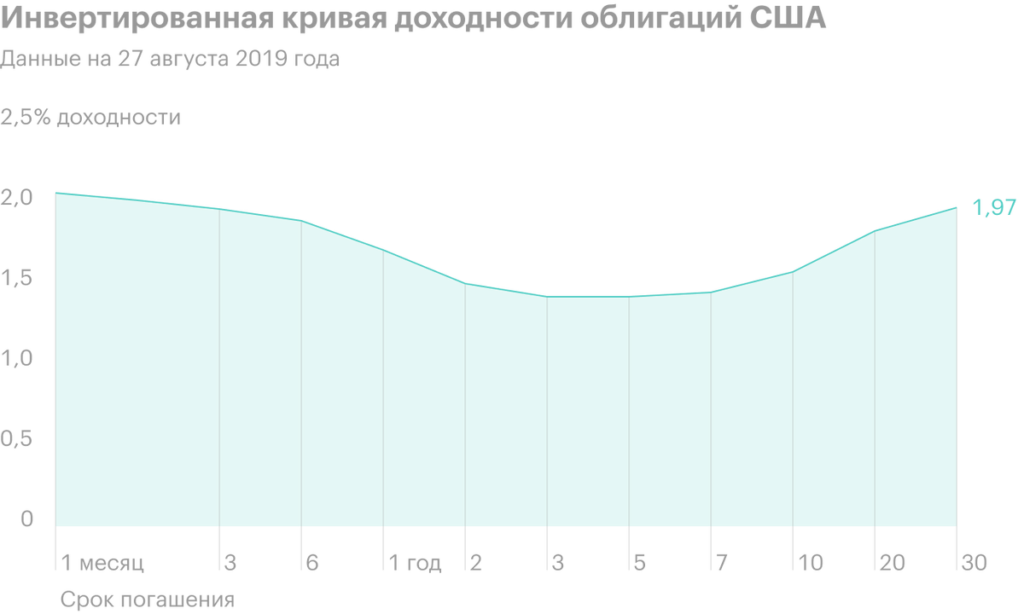 Negative spread as an indicator of recession

The U.S. economy has experienced six recessions since 1976.. And before each spread of ten-year and two-year bonds fell below zero..

So, the dot-com crisis of the early two thousandths happened through 33 months after inversion. And the Great Recession — the financial crisis of 2008 — later 22 months.

The last time the spread fell below zero in August 2019. And just five months later, the economy was closed for quarantine.. Coincidence? Maybe. But it is likely that, that a recession would have happened without the pandemic, and COVID-19 has only accelerated the process. 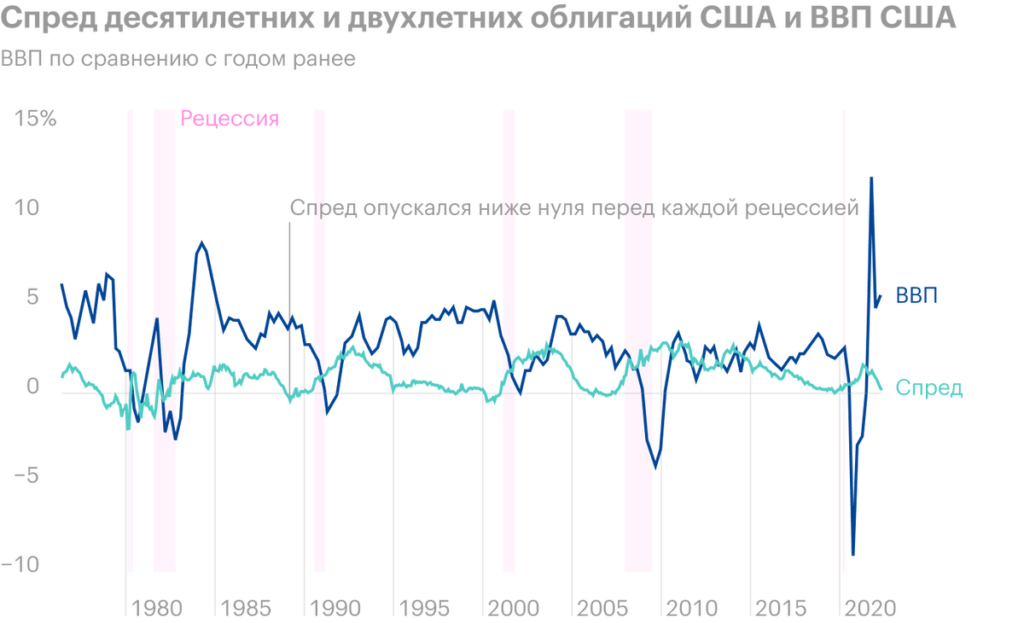 During any recession, the stock market falls.: companies lose profits, and investors get rid of high-risk assets. That's why stock market also closely monitors the yield curve and spread.

As in the case of a recession, stocks do not fall immediately, but only months after the inversion.

Later, shortly before the recession, the market falls by tens of percent.. Usually at this point, the central bank saves the economy and lowers the rate.. So he makes loans cheaper. This stimulates companies to develop, and consumers to spend more.

History shows, that the U.S. stock market is recovering from recessions. That's why a long-term investor with a horizon in 10 and for more than a year, do not worry about the inversion of the yield curve. 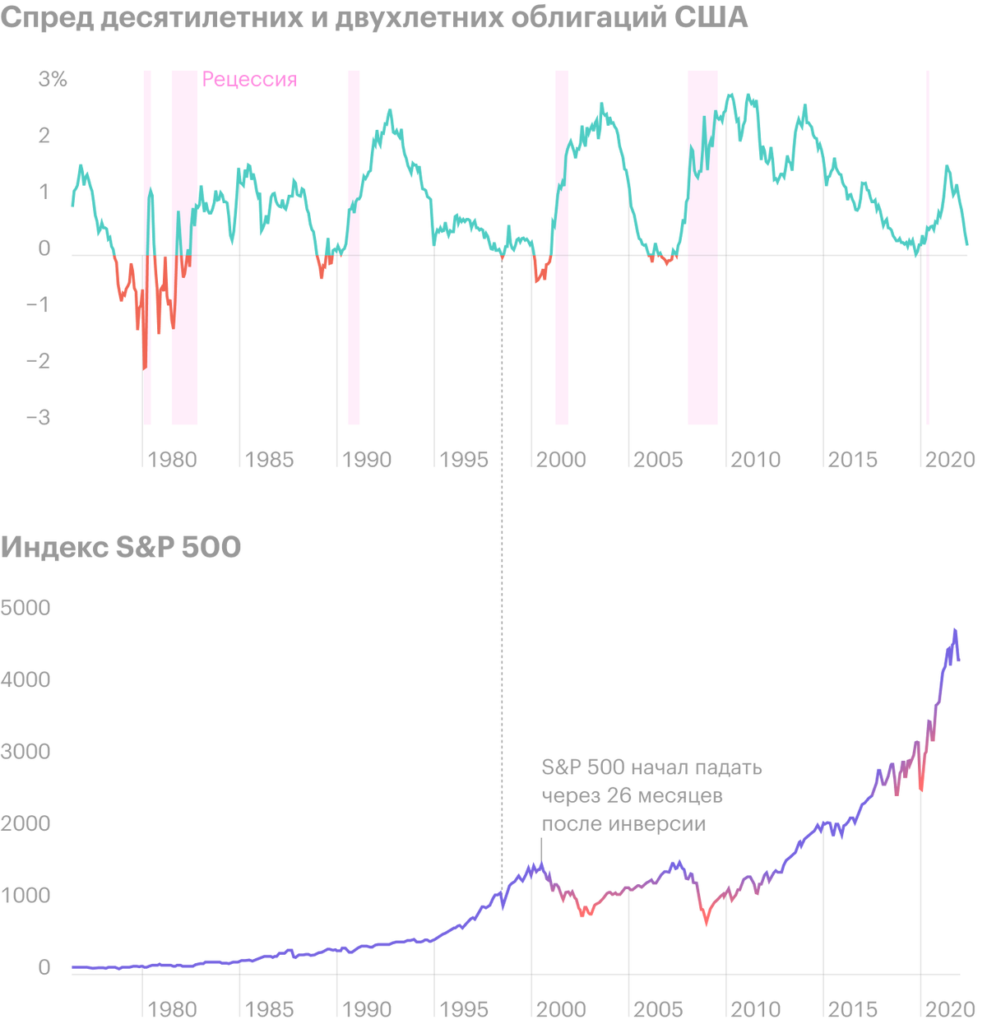 Since the beginning of 2022, the US bond market is setting up for a recession. During this period, the spread of ten-year and two-year securities fell from 0,8 to 0,2%.

In March, Bank of America surveyed professional investors, which collectively manage a trillion dollars in assets. 62% Said, what awaits stagflation. During this period, the economy slows down., but prices continue to rise.

One of the likely causes of the future recession is the actions of the regulator. Two years, that is, since the beginning of the pandemic, FED pursued a soft policy: kept the bet at zero and printed money. And this led to the maximum for 40 years of inflation rate. Now investors are apprehensive, that the bank will aggressively cool the economy in the fight against rising prices.

The Fed's position is exacerbated by non-monetary causes of inflation. The main one is the disruptions in production and logistics due to COVID-19. Many goods were in short supply, and this also accelerates prices.

Another reason is the military operations in Ukraine.. With 24 February prices for various commodities rose by tens of percent. For example, for energy carriers, metals, crops.

"Somebody think, that this time it will be different. I remember the same comments about the inversion of the yield curve in the early and mid-two-thousandths.. In both cases, a recession followed.. Certainly, it may not be related to the state of the economy in the future. But past data says, that this is a good indicator of a recession", said the head of the Federal Reserve Bank of St. Louis James Bullard in October 2018.

Important to remember: yield curve inversion does not cause a recession. And it's not a diagnosis., but just an indicator. Albeit accurate enough.

Will investors see an inversion of the curve in 2022?? Probably. Will it be followed by a recession after some time?? For sure. But when and how much the stock market will fall, no one knows.

Teladoc (NYSE: TDOC) - American site, on which clients are provided with services in the field of telemedicine. The company shows a good level of improvement, but the limitations of the format do not allow this sector to be considered truly promising.. And this is not good news for the owners of the company's shares..   Well “stock market education” becomes more expensive