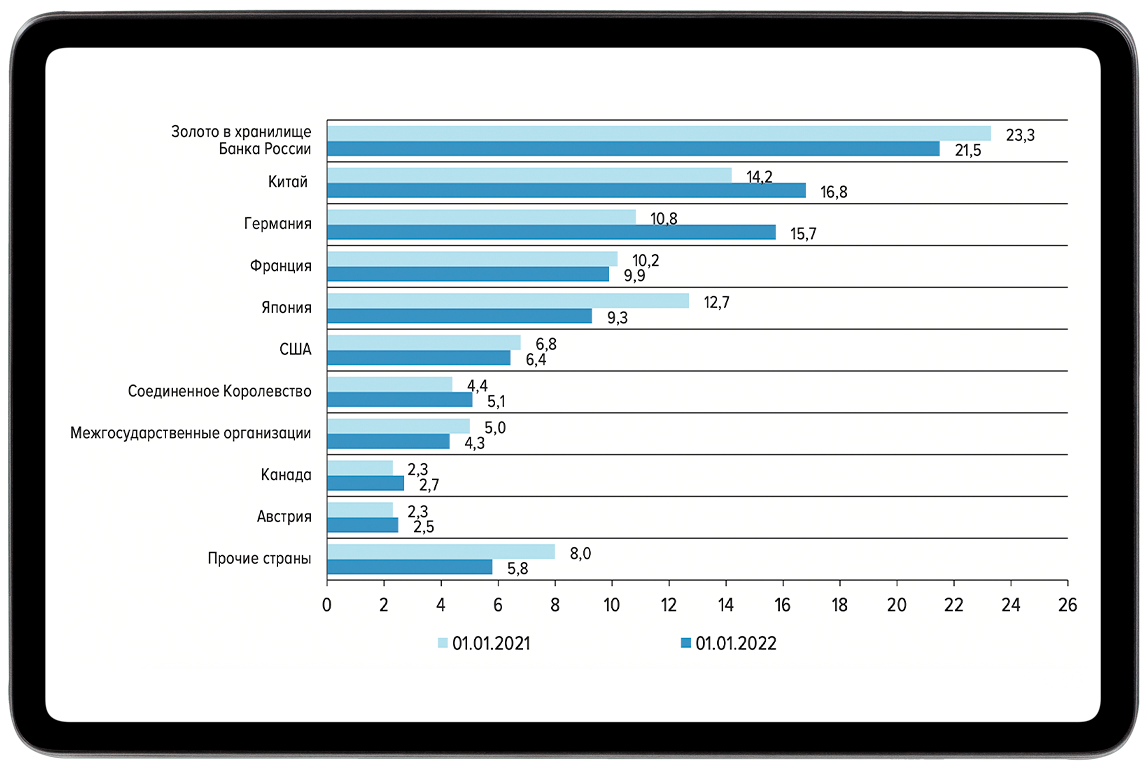 The Bank of Russia published a report for 2021. Document shows, what was the state of the Russian economy shortly before serious international sanctions. Here are the main facts from the report.

Inflation: before and after

COVID-19 has led to various restrictions and disruptions in logistics. And this has led to a shortage.: demand accelerated, and supply slowed down.

Inflation also increased in Russia: with 4,9 to 8,4%. This is well above the target level in 4%. Inflation in different segments amounted to:

The biggest increase in prices was in Siberia, because in this region, demand has greatly outstripped supply. Least of all - in the Far East "due to restrained growth in food prices".

Recently, 11 February, The Bank of Russia expected inflation to reach 5-6% by December 2022. Just a few weeks later, the bank withdrew its forecast., as “inflation accelerated significantly amid increased uncertainty”.

The bank also recently revised its GDP forecast for 2022.: from “will grow by 2-3%” to “there will be a decrease in the coming quarters”. A slightly more accurate forecast was given by the Chairman of the Accounts Chamber Alexei Kudrin: GDP will fall by 10%. For comparison: in the crisis year of 2020, this figure fell by 2,7%.

Federal budget expenditures amounted to 24.8 trillion rubles, therefore, at the end of the year, the budget was executed with a surplus of 0.5 trillion.

Investidea: Prologis, because they underestimated

In 2022, the Russian economy may become even more dependent on oil and gas supplies. If the West does not declare an embargo, then the country will still be able to earn on the export of energy. At the same time, the volume of imports may fall sharply, since many countries have banned the import of their goods to Russia. According to the Bank of Russia, already in January-March of this year, the trade surplus increased in 2,6 Times.

For this reason, and also due to various restrictions on the purchase of foreign currency, the dollar has decreased against the ruble over the past month: from 120 to 80 R. Exporters still sell their volume of currency, but importers and the public cannot or simply do not want to buy it.

Gold and currency of the Bank of Russia

Almost all foreign exchange assets are bonds of other countries and deposits. The bank holds these assets in accounts in the countries of issuers, i.e. abroad. Gold - in Russia.

Over the year, the bank's gold and foreign exchange reserves increased by $25 billion. Mainly through the purchase of foreign currency in the domestic market. But the currency revaluation had a negative impact on the volume of assets: the dollar rose against other currencies. 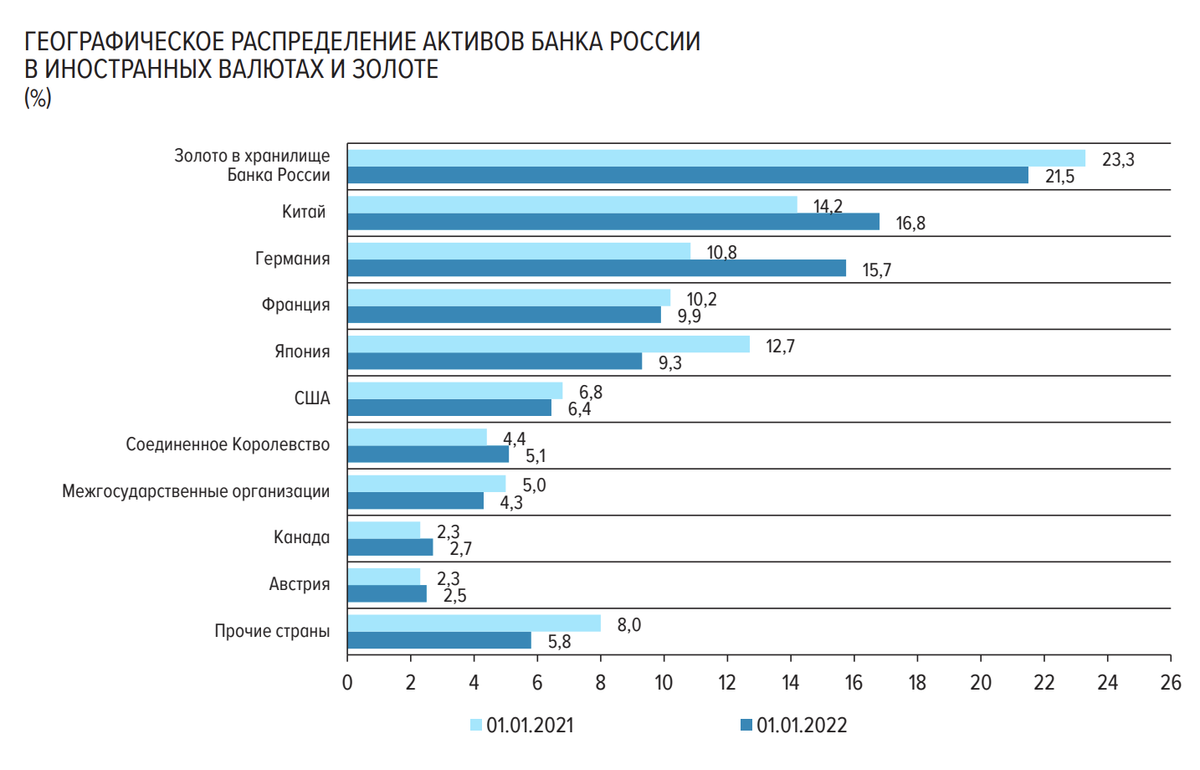 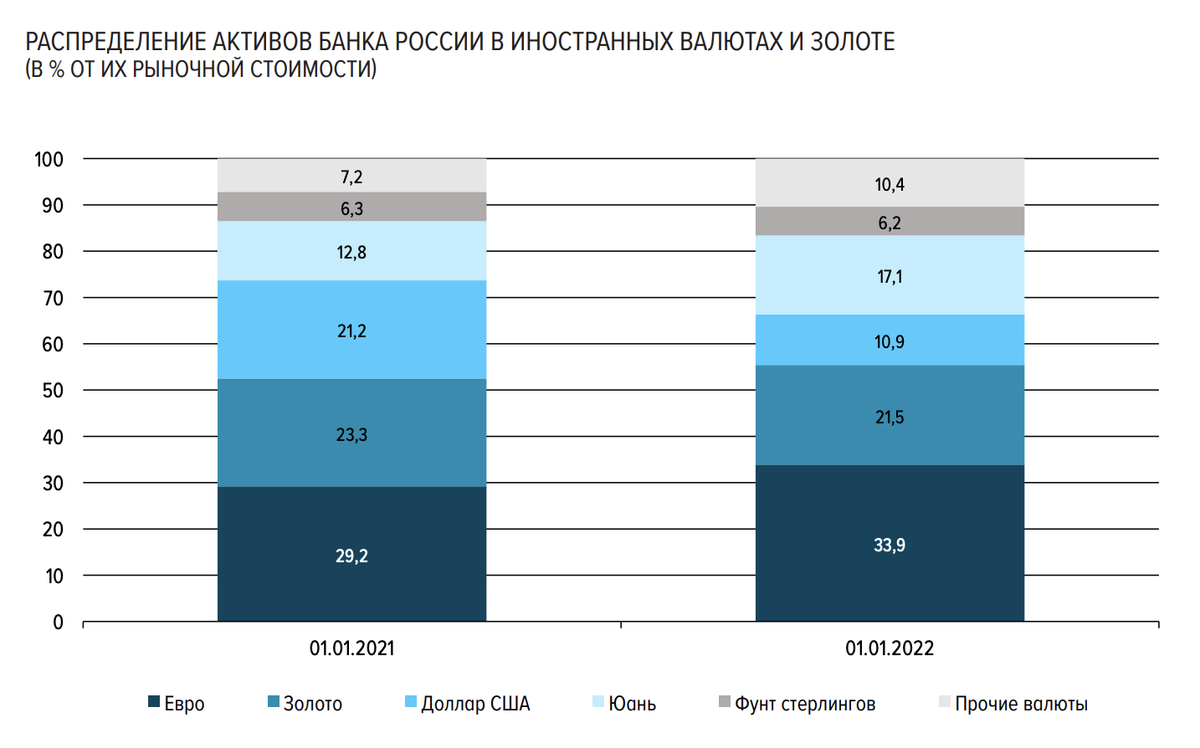 Internal and external debts of Russia

And the external federal debt amounted to 4.4 trillion rubles. This is about 60 billion dollars at the exchange rate at the beginning of the year.. Of these, 20 billion are held by residents in the form of Eurobonds.

Once again about the default

13 March Finance Minister Anton Siluanov said: The West froze $ 300 billion of assets of the Central Bank. This means, that the Bank had about 300 billion. Even if we take only gold in Russia and yuan in China, will get about 240 billion. The external debt of the Ministry of Finance is 60 billion, therefore, in the “normal” world, such a borrower would not be called bankrupt. But that's exactly what's happening now.

3 CAUSES, WHY DOES NOT IT WORK, WHEN YOU DREAM BIGGER

In early April, the Ministry of Finance wanted to pay off the debt on Eurobonds from its frozen account, but the foreign bank did not accept the order. As a result, Russia paid in rubles, and agency S&P has rated it "Selective Default".

The agency gives such a rating to borrowers., who missed a specific payment. According to S&P, foreign investors will not be able to convert rubles into dollars and get access to money. But, according to the Ministry of Finance, with these rubles, foreigners can buy new Russian bonds. Seems, that such a proposal did not interest Western investors.

For the last payment, Russia can settle up to 4 May. Otherwise, creditors threaten to default. In response, Siluanov said, that Russia will go to court.

What will happen to huge corporate debt, also unclear. Companies owe non-residents $ 300 billion. According to Siluanov, the decision on the payment will not be made by the company itself, and the government commission. Probably, the commission will allow only those companies to repay the debt, from the products of which the West did not refuse. For example, some exporters.

And to other companies, maybe, will not be allowed to return the debt. For example, 11 April Russian Railways has not paid off with foreign investors. According to her, the reason is "compliance with legal and regulatory requirements in the correspondent banking network".

After default, it will become more difficult for a country or company to arrange a new debt. Therefore, the company will have to issue its bonds at a higher interest rate.. And quite likely, that this company will pass on its interest costs to the end consumer.

​​ $SPCE Why Virgin Galactic Shares Fall Again? Will Virgin Galactic conduct space flight tests next month or not? Space tourism company Virgin Galactic plummets for second straight session on Thursday, closing on 3,8% Fall, and a fraction of a percent lower on wednesday.   S&P 500 drew the "cross of death". What does this mean and what do the statistics say?

Teladoc (NYSE: TDOC) - American site, on which clients are provided with services in the field of telemedicine. The company shows a good level of improvement, but the limitations of the format do not allow this sector to be considered truly promising.. And this is not good news for the owners of the company's shares..   IPO SmileDirectClub