SEC - US Securities and Exchange Commission - expanded the list of candidates for delisting, because they did not give access to audit reports.

The SEC added several Chinese issuers to the list at once. For example, Weibo, iQiyi and Futu. Also, Baidu, which is called the Chinese counterpart Google. Following the SEC decision, Baidu said, that “is actively exploring possible solutions and is committed to maintaining the listing as Nasdaq, as well as in Hong Kong.

Chinese companies get listed by the SEC as, how they send their financial reports to the regulator. 11 March SEC named the first issuers, who have not been tested. For example, this is Yum China and ACM Research, whose papers are on the St. Petersburg Exchange.

How it all started

In 2021, the SEC approved a law to hold foreign companies accountable. It requires U.S.-listed foreign issuers to make detailed financial disclosures.. If the SEC fails to review auditors' reports for three consecutive years, the issuer will be forced to leave the American exchange.

Recently, SEC chief Gary Gensler said, that another 248 Chinese companies with a combined capitalization of $2 trillion could be included in the list of candidates for delisting. According to him, if China does not provide access to the reports, delisting may start in 2024.

Gensler does not consider this a good reason., because audit reports rarely contain confidential information. “50 jurisdictions got comfortable with it. Working papers are just income and expenditure data.”, - said the head of the SEC.

Earlier, Chinese regulators said, that they had productive negotiations with the United States on the issue of audit. 23 March, China even compromised. The authorities asked large companies like Alibaba, Baidu and JD.com prepare 2021 reports in line with SEC requirements.

But, According to Gensler, such half-measures will not solve the problem. He said, that American law does not focus on individual companies, and the whole countries. And if at least one company does not pass the test, then everyone can be recognized as violators.

“We had respectful and productive conversations, but I do not know, how will it end. It all depends on the Chinese authorities, And, frankly speaking, it's a tough choice for them.", — said the head of the US regulator.

31 March, after being included in the SEC list, Baidu paper on the American stock exchange fell by 8%, to 132 $. Alibaba papers, JD.com and TAL Education also fell by 6-7%.

Amid news of the delisting and a new outbreak of COVID-19 in China, the Nasdaq Golden Dragon China index has already fallen by 20%. The index includes about a hundred securities of Chinese companies listed in the US. 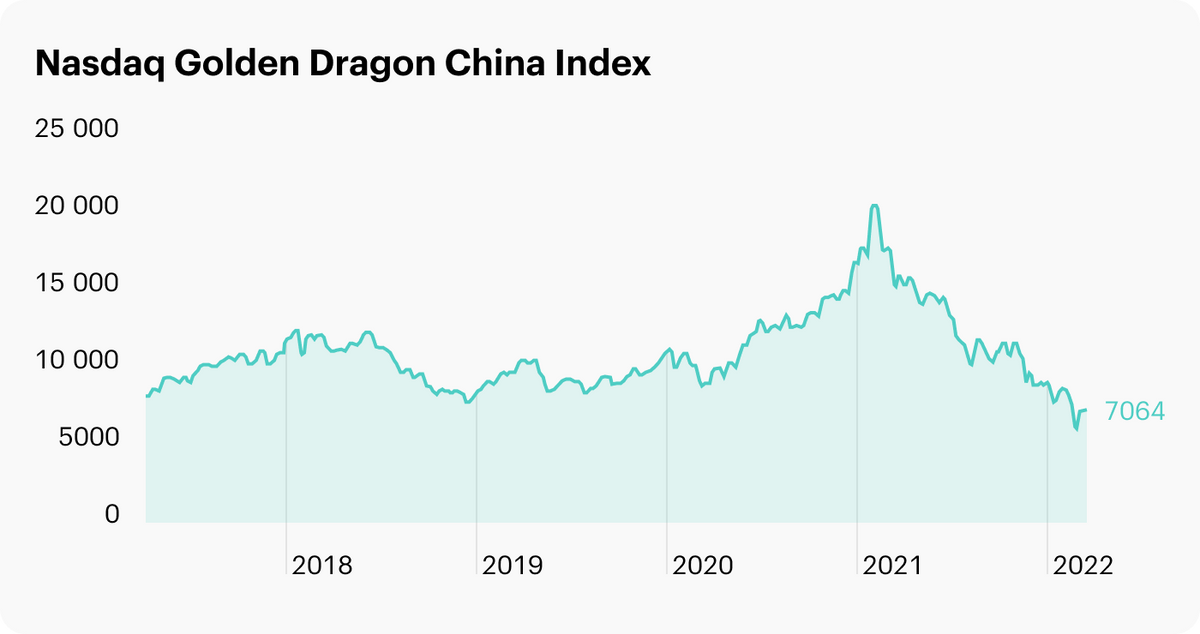 Bank of New York MellonBK$43.14BuyService in partnership with Tinkoff Investments. Quotes are updated every 15 minutes BK is a colossal financial institution, serving 72% Fortune companies 500. According to the company's detailed presentation, its revenue is divided into the following segments: Services in the securities market — 45%.   3M (NYSE: MMM )

TotalEnergies SETTE51.17 $BuyService in partnership with Tinkoff Investments.   Another Clairvoyance