1 February PayPal released its fourth quarter financial report 2021 of the year. The company reported in line with expectations, but made a weak forecast for the current quarter and 2022 year. In the post-market, shares fell by 18%, to 145 $.

Indicators compared to the fourth quarter 2020 years and analyst forecasts:

PayPal's revenue growth has been slowing for several quarters. One of the reasons is the transition of Ebay to its own payment system.. Marketplace bought by PayPal in 2002 year for making payments on the site. IN 2015 the companies split, and now they are gradually ending their cooperation.

According to PayPal, inflation, that keeps consumer spending down, and problems with the supply chain also negatively affected revenue.

PayPal is one of the beneficiaries of the pandemic. Locked-in consumers, who received money from the states, began to spend less on concerts and other travel and buy more goods in online stores. Paypal benefited from this, whose shares since February 2020 year by February 2021 grew by about 150%.

And now PayPal's revenue growth has begun to slow down., and investors understood, that this company is overrated. So, over the past year, PayPal shares have fallen by 50% - up to the level of May 2020 of the year. As a result, over the past two years, PayPal shares have risen by only 27%. This is a lot, but for comparison: S&P 500 And Nasdaq over the same two years added 41 And 56%. 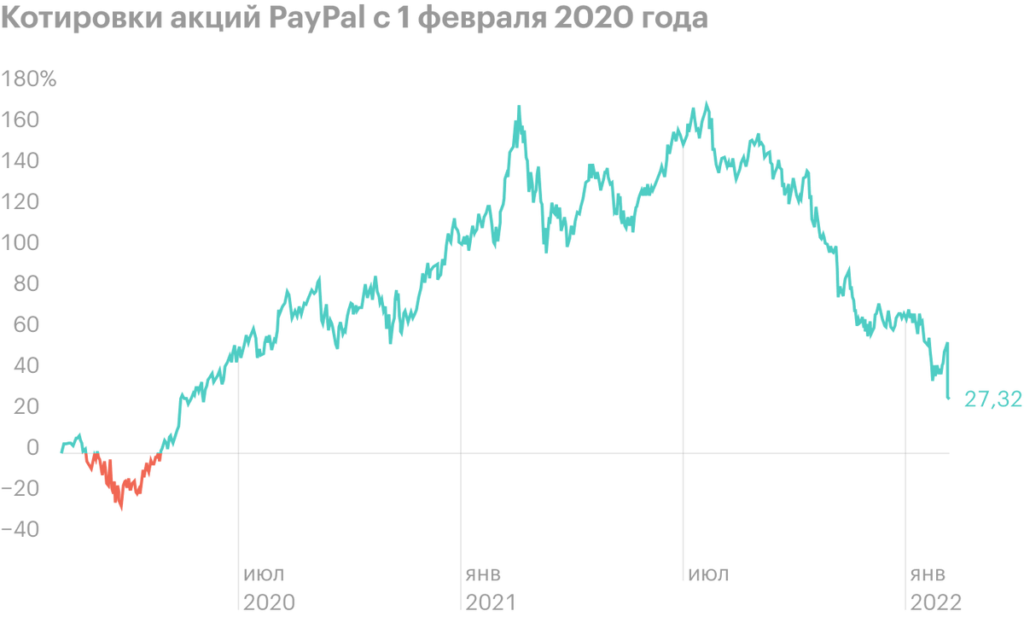 ​​ $SPCE Why Virgin Galactic Shares Fall Again? Will Virgin Galactic conduct space flight tests next month or not? Space tourism company Virgin Galactic plummets for second straight session on Thursday, closing on 3,8% Fall, and a fraction of a percent lower on wednesday.   Investidea: Robinhood, because now you can

Teladoc (NYSE: TDOC) - American site, on which clients are provided with services in the field of telemedicine. The company shows a good level of improvement, but the limitations of the format do not allow this sector to be considered truly promising.. And this is not good news for the owners of the company's shares..   Alrosa sold to 2 times more diamonds, what did you get