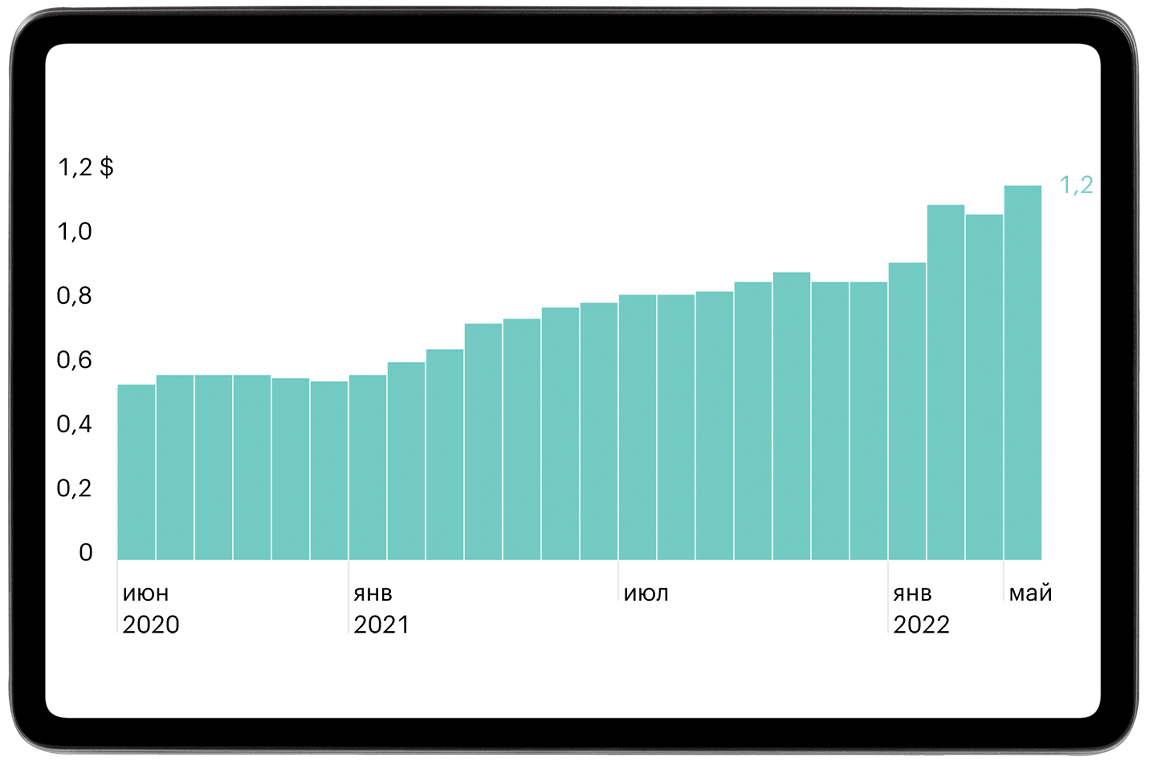 Macro statistics and the upcoming meeting FED shattered investors' hopes for a quick rebound in the US market.

10 June, the US Bureau of Labor Statistics published inflation data in May. Consumer price growth accelerated again: compared to last year, they jumped to 8,6%. This is higher than the forecast in 8,3%.

Basic prices, that is, without taking into account energy and food, rose to 6%. It is less 6,2%, what were in April. But more analysts' expectations, who counted on 5,9%.

Such a rise in prices led to a drop in real wages in the United States.. So, year-on-year nominal average hourly wage increased by 5,2%, but taking into account inflation, it decreased by 3%.

Current prices, e.g. record 1,2 $ per liter of gasoline, negatively affect the expectations of the average American. As a result, in June, the consumer sentiment index fell to 50.2 points - the lowest in history. This means, that households, a key driver of business growth, are cautious about their financial situation and the state of the economy as a whole.. 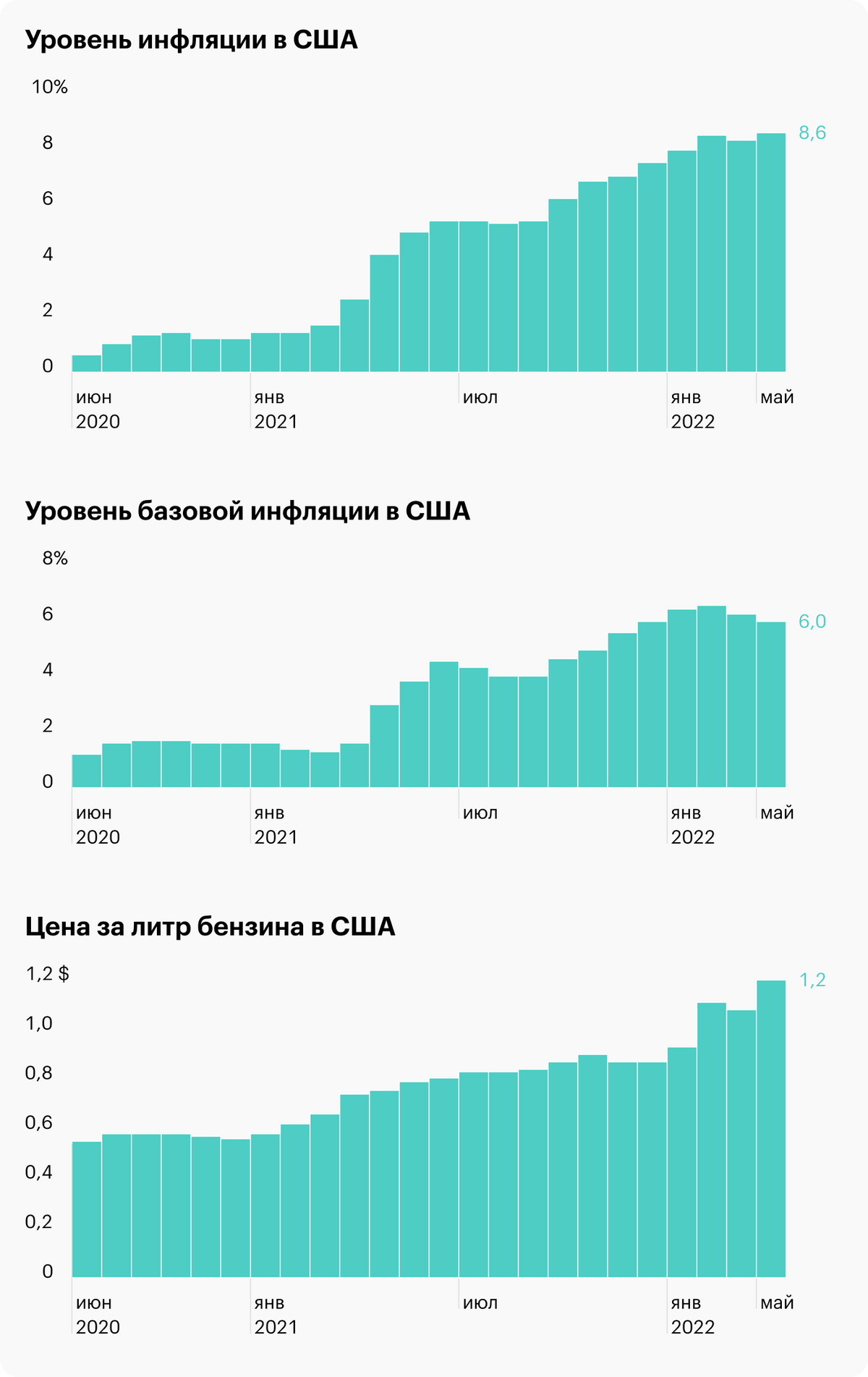 Before the release of the latest statistics, some experts, e.g. from Goldman Sachs, Assumed, that America has already passed the peak of inflation. This could be a positive for the stock market..

Rapid and steady price increases are a negative for most corporations.. For example, for retailers like Walmart and Target. Basically, they sell essential goods and can not so quickly shift costs to buyers.. And the profitability of their business suffers from this..

Amazon's net profit fell by 50% due to rising costs

Another reason for the downturn in the stock market is the possible reaction of the US Federal Reserve to rising prices.. The tasks of the regulator include the control of inflation, which is well above the target level in 2%. To beat growth, The Fed will be forced to quickly raise the rate. But it was the soft policy of the regulator that supported the bullish trend in the market in recent years.. See also, the rate may be raised too high, and this threatens a recession in the economy.

Among other things, following the rate, the bond yield is also growing.. For example, the yield of treasury ten-year plans has doubled since the beginning of the year, from 1,6% to 3,3%. As a result, low-risk assets have become more attractive compared to stocks., which on average give 1,5% dividend yield.

High interest rates affect fast-growing companies the most. They are often measured by future cash flows using a discount rate.. For example, it could be the Fed's rate or treasury yields.. And the higher that rate is., the less valuable to investors are the expected flows of companies. 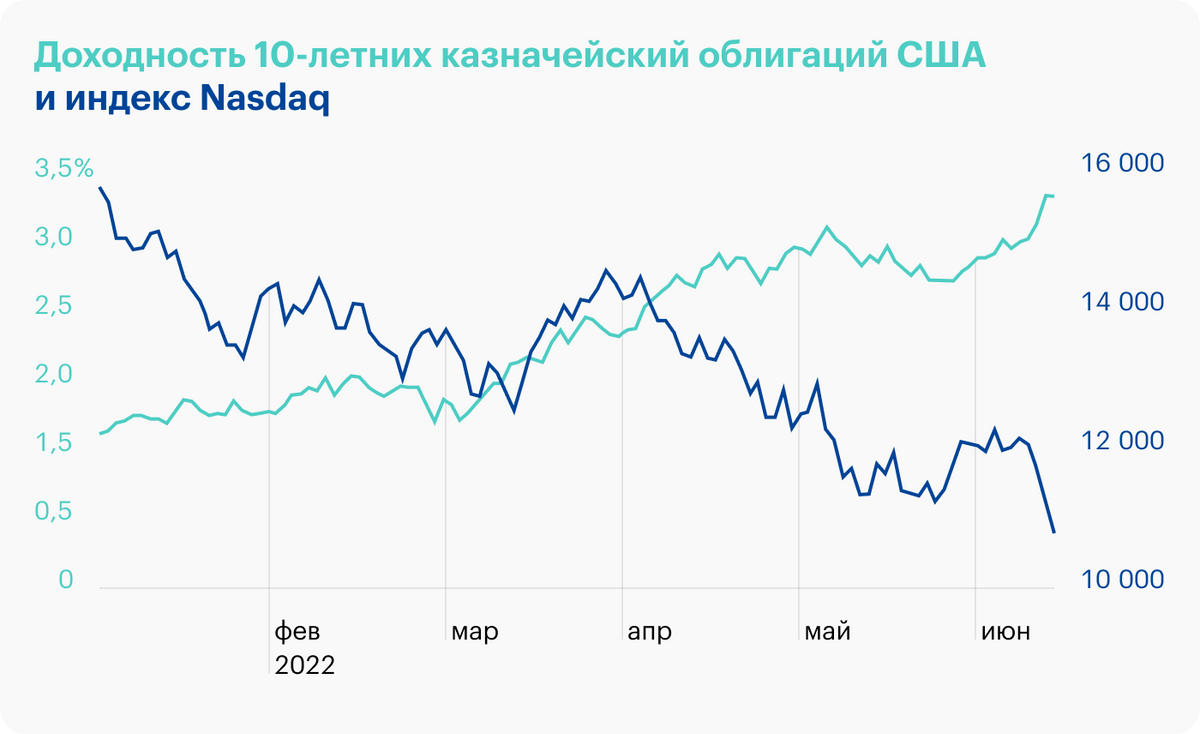 Waiting for the Fed

Until recently, professional market participants had a common opinion.: The Fed will not arrange a bloodbath and at the next meeting will raise the rate by half a percent, or 50 basis points, like in May.

Now expectations have changed.. For example, economists from Goldman Sachs talk about the increase immediately by 75 basis points. In their opinion, in June and July, the rate will be raised by 75 basis points, in September — on 50, in November and December — on 25. As a result, by the end of the year, the rate may rise to 3.25-3.5%.

According to the CME exchange, investors estimate the probability of an increase in 75 basis points in 97%. To 10 In June, this probability was estimated at only 23%.

Among other things, investors will closely monitor not only the rate, but also behind the speech of the head of the Fed Jerome Powell at the end of the meeting. He can say that, how aggressively policy will be tightened in the future. This is what will set the movement in the market in the short term..

The next two-day meeting of the Fed will be held today and tomorrow, 14—June 15.