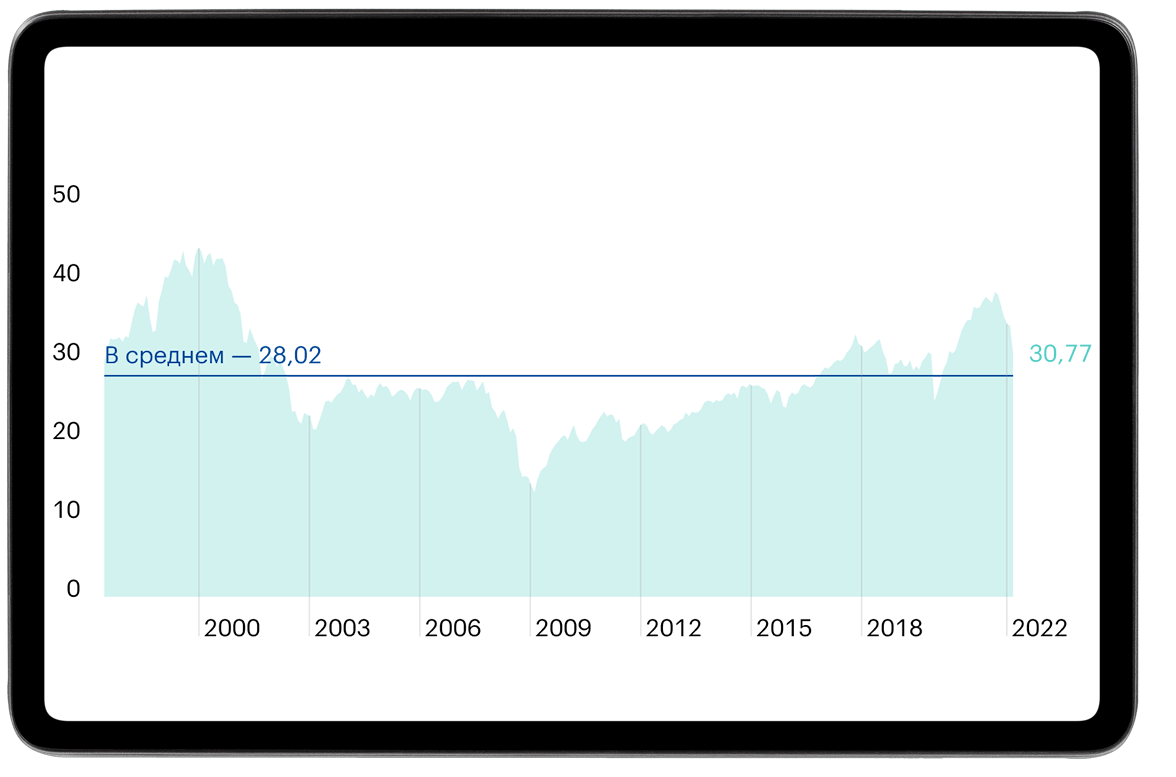 The price of profit

IN 1994 Peter Lynch, investor and former manager of the Magellan Fund, quoth: “Historically, corporate profits have grown by 8%. Means, it doubles every nine years. The stock market should also double every nine years.. Because profits are rising 8% in year, and stocks follow suit. That's all".

The main driver of growth or fall of shares is the profit of companies. In the short run, stocks and even the entire market can be expensive or cheap.. But in the long run, stock price should follow earnings..

Estimate cost S&P 500, and also the potential for growth or decline is possible through the multiplier P / E. This is the S level relation&P 500 to company profits, that are included in the index.

Only one P / E won't give anything, so it should be compared to something else. For example, with the average for the last 25 years value. Here are three options.

The most famous cartoon version. Here:

At operating P / E there is a noticeable flaw: it takes into account the last, current profit, so it sometimes gives a wrong estimate. For example, in 2009 during the financial crisis S&P 500 dropped hard. But company profits have fallen even further., and the market seemed expensive. The multiplier did not teach, that revenues will recover soon, while investors already factored it into the share price.

Forward P / E no that lack, which the operating room has: it takes into account future earnings, not the current. So, in the same crisis of 2008-2009, the multiplier showed, that given the expected profit, low market prices are a good time to buy.

But the forward indicator still has an important disadvantage.: in the future, earnings may not meet market expectations. 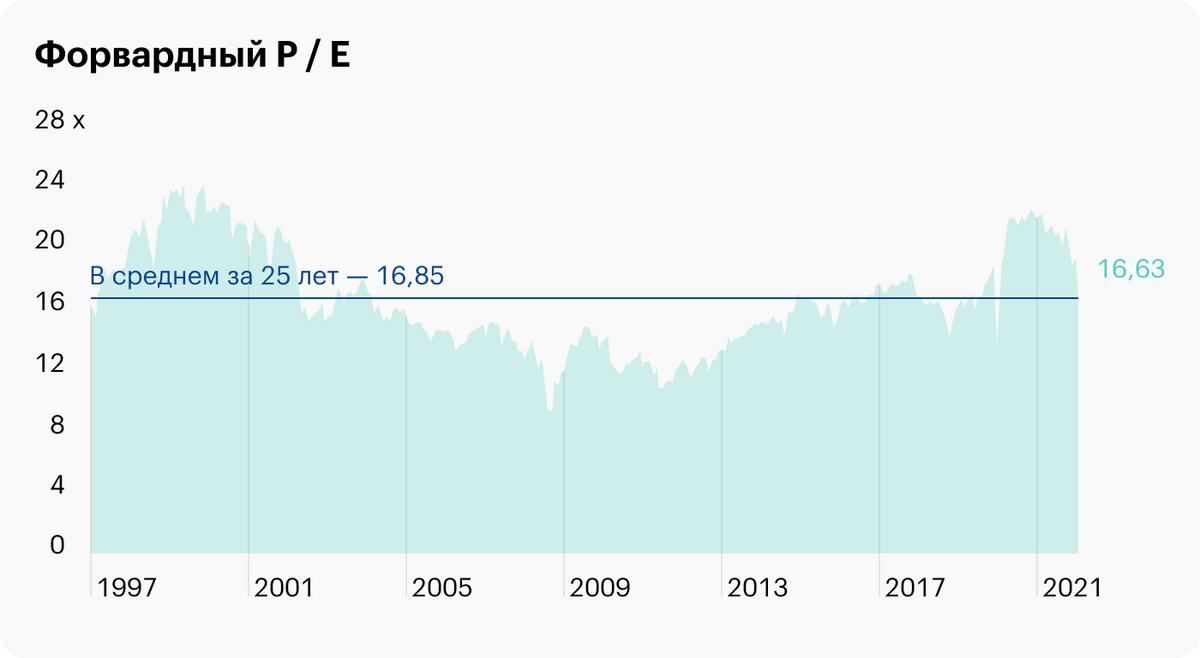 The second name of the multiplier is CAPE. Here:

During a recession, company profits sometimes fall more, than their stock prices, so the classic P / E may seem high. To solve this problem, economist and Nobel laureate Robert Shiller developed his own multiplier - Cyclically Adjusted Price-to-Earnings Ratio, or CAPE.

P / Schiller's E takes into account profits over the past ten years, which helps smooth fluctuations in corporate earnings during periods of recession. Also, earnings are adjusted for inflation.. 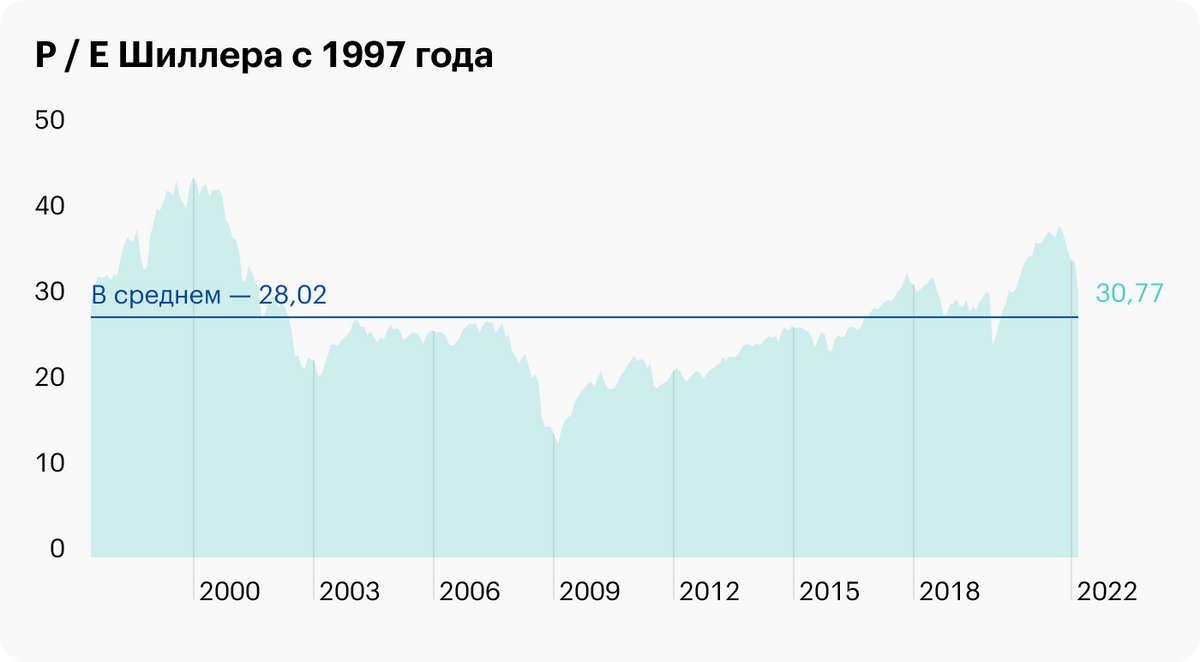 Often high prices in the stock market are explained by breakthrough technologies.: railways, a television, the Internet, and now electric cars and other metaverses. And every time, expensive stocks become cheap after a short time..

For example, in the spring of 1999, the multiplier rose to an almost record 42. Investors, who came to stock market then, received an average annual return in the next ten years of −5%. This means, that the portfolio of shares of such investors has fallen annually by 5% for ten years in a row. Probably, adherents of Internet technologies of the late nineties counted on such a result.

This also works in reverse.. So, investors, who bought securities in the spring of 2009, in the next ten years received an average return of 14% per annum. Then at the height of the financial crisis P / Schiller's E dropped up 13.

Now P / Schiller's E is still above average. And most likely, in the next ten years, the American market will not show such high returns, as in 2020-2021. 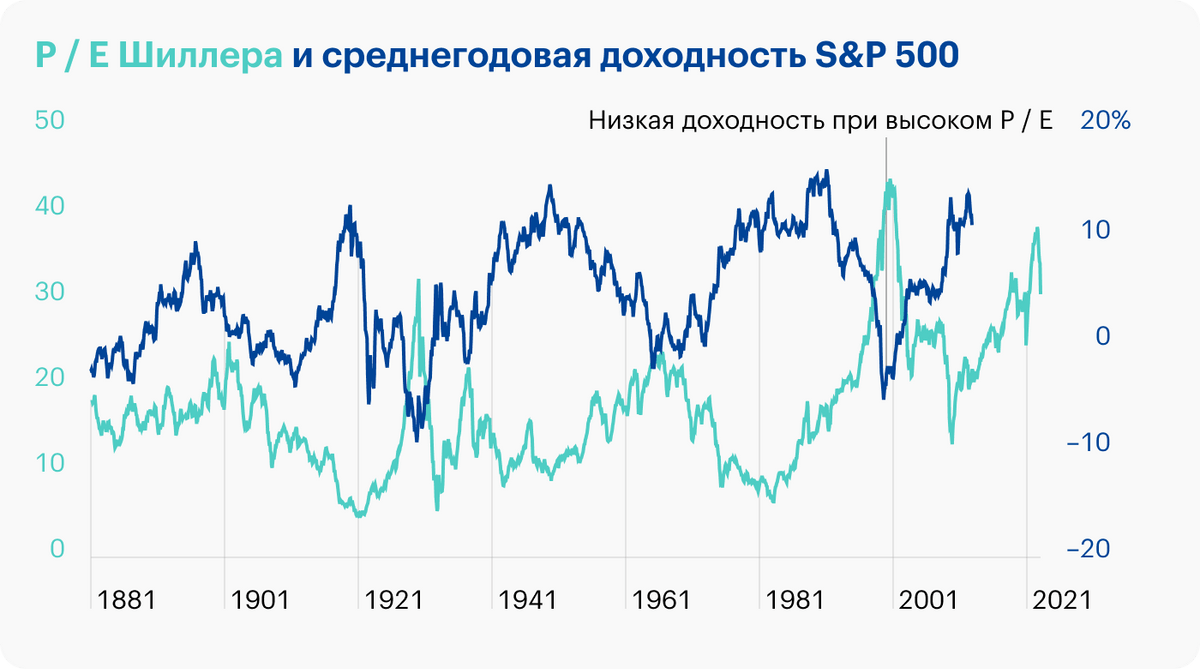 From the beginning of 2022 S&P 500 lost about 800 points, and multipliers P / E greatly decreased. And none of them still show, that the market is cheap.

According to P / E Schiller, S&P 500 should fall to 3580 points. It was approximately at this level before the coronacrisis. Not Known Beforehand, will S fall&P 500 to this mark and whether it will fall at all. But something else is known: the market does not look at multipliers, but on macroeconomic data.

For example, of action FED USA. It was the policy of the regulator that determined the movements in the American market in recent times.. The Fed fights rapid price increases, but only recently started a cycle of rate hikes. If the regulator presses the brake pedal too hard, then the US economy may experience a recession and the S index&P 500 will drop even more.

That's why an investor should monitor the state of the economy as a whole, not for the behavior of individual stocks. And the level in 3580 - this is just one of the landmarks for the near future.

If Peter Lynch is right, then stock prices should follow earnings. According to analysts, unless there is a recession, then corporate profits from the index S&P 500 in 2022 and 2023 will grow at an average per 25 years level - at 8 And 10%. And this is another argument in favor of, that at the current marks at S&P 500 not so much growth potential. 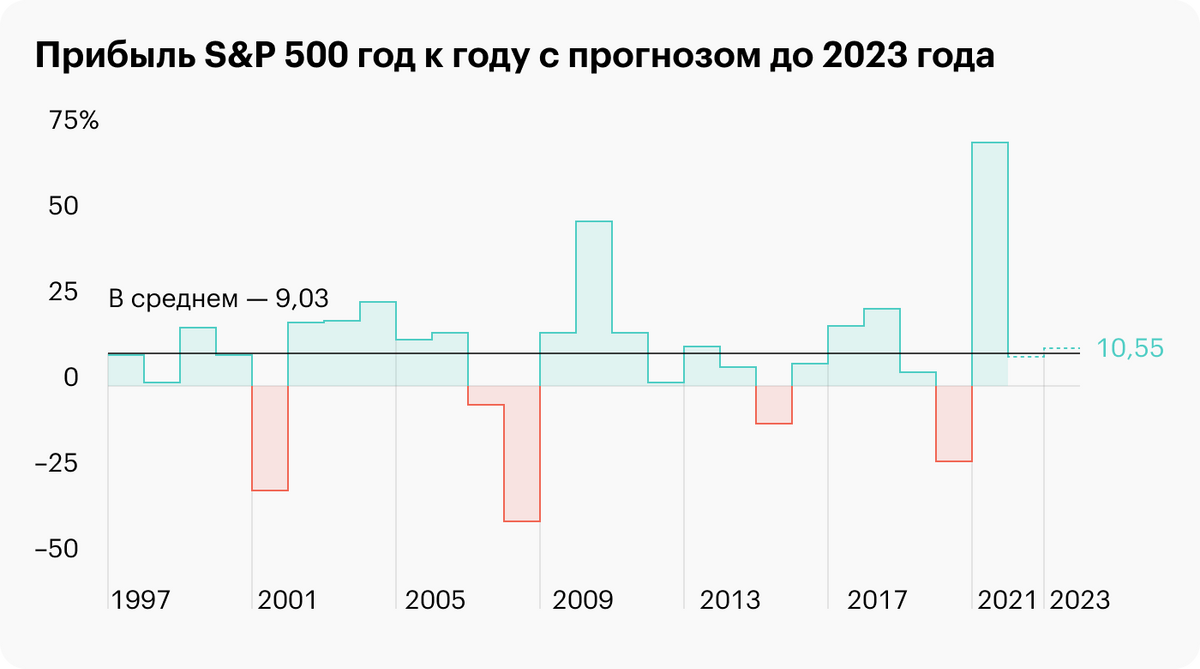